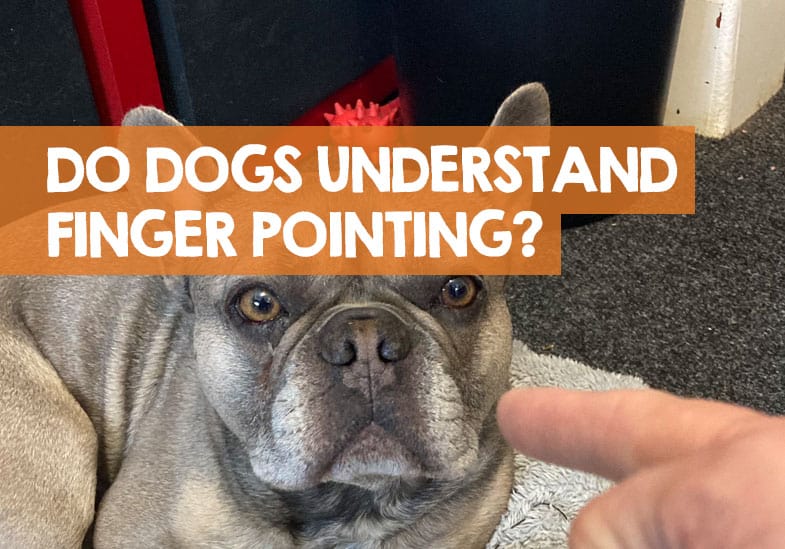 If you’ve ever owned a dog, you’ve probably had this thought: if only I could talk to it. Clear communication would certainly make training a lot easier. But since your dog doesn’t understand your language, you will resort to other methods of communication, such as pointing.

However, does it work and do dogs really understand when you point at them?

Let me explain what I think, and what experts believe. A lot of this is my own personal experience of how my dog reacts when I have pointed at him in the past.

Do dogs understand when you point a finger at them?

My dog Claude seems to sometimes understand exactly what my pointing means. There are times when he will respond to pointing commands, other times not.

Do dogs understand when you point at them? To a certain extent dogs will understand you are addressing them when pointing at them, but they might not understand the meaning of the pointing finger and could become confused.

To give you a real-life example, when walking my dog off his leash in our local woods, I can point, talk, and then point in a path’s direction, and he will go that way. Other times I might scold him and point at him, and I don’t believe he understands what I mean.

Different types of finger pointing—are you confusing your dog?

Many dog owners use pointing as part of their interaction with their pet. But you should exercise a degree of caution as different types of pointing can confuse your dog – as I have found out in the past.

Here’s the most common ways you might point at your dog.

Consider how you’re using pointing and how you can improve communication based on these insights.

Pointing at your dog

What do dogs think when you point at them?

The problem here is that in the first instances mentioned above—pointing at food or toys—the pointing is associated with positive scenarios. When your dog is used to you using that type of pointing, during training or disciplining it may not understand why the pointing finger is paired with an angry look and tone of voice.

Therefore, your dog may seem confused when you point the finger at him or her.

Do dogs like it when you point at them?

Dogs don’t have inherent understanding for human gestures. Over time your dog will learn to associate certain consequences with particular commands or gestures. This can include hand signals such as pointing at them.

So, if you point at your dog often while yelling at him or her, eventually it may not like seeing that finger coming its way.

On a similar note, dogs have also learned how to pick up on our emotions. As well as gestures, they will also understand when we start to cry, and in some cases will attempt to comfort us.

Is it bad to point your finger at a dog?

Also, remember your dog takes time to learn lessons. The first time you point that finger, it may try to bite it or play with your hand, simply because that’s what dogs do. You need to teach the right associations by sticking to a training plan.

Another way to utilize finger pointing is making it a method of communication, specifically to give direction. How can you incorporate this into your life to benefit both you and your pet?

So, it can be bad to point your finger at a dog, but only really if you’re sending them mixed message about what it means. If they don’t understand what you mean by pointing at them, then that might create a bad reaction.

Pointing to give your dog direction

Your dog isn’t born with an understanding of what your pointing means, but you can cultivate an understanding over time. Both nature and nurture play their roles in this aspect of you and your dog’s relationship.

Genetically, they’re predisposed to be intelligent enough to learn from you. Even without training, if you place two objects on the floor and point to one of them, there’s a good chance your dog will pick the one you point to.

So, nature does play a role in the process. However, nurturing a habit is as important and repetition is the key to make it work.

Eventually, your dog will understand if you use pointing in scenarios like:

The latter is something I simply love doing! It saves me from getting up and fetching the toy. And the look of excitement in my dog’s eyes when it realizes it’s play time, is priceless.

How to train your dog to understand pointing gestures

As stated, you’ll need to repeat actions multiple times before your dog will react correctly to your pointing.

Interestingly, you’ll have to point in a certain manner if you want to be clear about your expectations.

For example, dogs will respond better when you point with your finger but without your arm crossing your body.

So, for best results, rather point with your right hand if you want your dog to go to your right. Also, your dog’s reactions will align better with your wishes if you use your finger, rather than an elbow or your knee.

Studies also show that dogs tend to associate pointing with a general area, rather than an object.

The process of teaching them requires positive reinforcement. Here’s an example:

Use this same process in many daily tasks. Dogs actually learn best in a natural environment. So, give praise when the dog follows your lead after pointing to its food bowl, looking at and fetching a toy you point to or getting off the couch after you pointed at the floor.

Do other pets understand when you point?

The topic of pointing has actually been researched a lot, not only with dogs, but by comparing results of toddlers, wolves, chimpanzees and dogs all responding to the gesture.

While some people have different takes on the outcomes, it does seem that when it comes to animals, dogs are the most skilled at understanding the purpose of pointing. So, your cat or other pets will most likely never be able to do what you train your dog to do.

Handy Hint: Here are some tips to follow should your dog ever start to ignore you or stop being affectionate.

Signs your dog is responding to your pointing

You can also measure your dog’s engagement during the process of learning what pointing means. Usually, dogs will show their interest in your pointing action with the following:

This shows that they’re engaged with the training. If it’s absent, you may need to get their attention with treats until the motions become habit.

Can dogs point in a certain direction?

So, what about dogs pointing in a direction for their owners to understand? This is actually possible in a manner of speaking. It’s also used by people who use dogs for hunting. When the dog finds the animal the owner shot—such as a bird—the dog will stand with its tail in the air and usually its nose in the direction of where he discovered the prey.

With the right amount of training, you and your dog will communicate much better than you think.

Dogs and humans communicate in many different ways, and pointing is just one of them. But don’t expect your dog to always understand what pointing means.