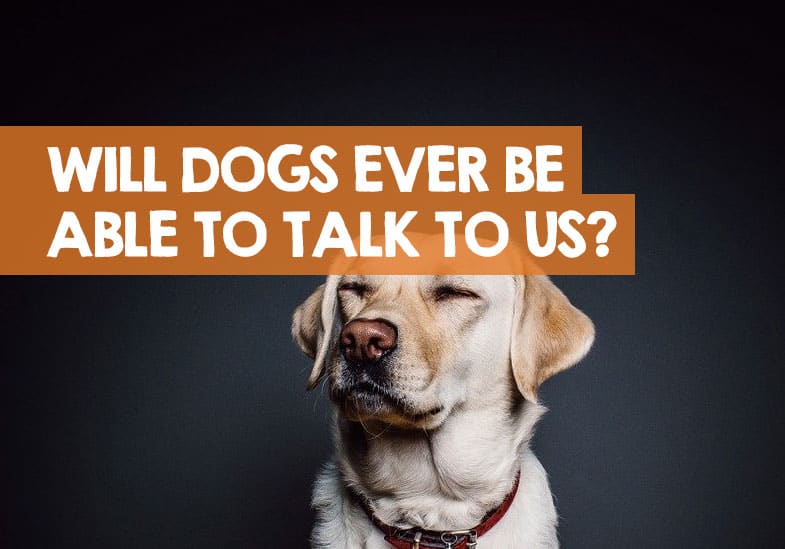 Understanding what our dogs want can be tricky as they can’t talk. We have to rely on their body language to figure out what they want and how they feel… and it’s not always easy. Like many dog owners, I sometimes wish it was possible for dogs to talk.

But will dogs ever be able to talk, and if they could, what would happen? I decided to find out with some science and a little bit of humor.

Will it ever be possible for dogs to talk?

All evidence points to the fact that dogs will never be able to talk and speak the human language, regardless of the efforts of scientists now and in the future. In a new and important study, researchers discovered that canines cannot distinguish words when they differ slightly, for example, sit vs set, or dig vs dog.

Alongside this, they struggle to separate similar-sounding words, like chalk and walk.

When it comes to humans, babies have the same issues with understanding speech until around fourteen months old. After this, they naturally begin to grasp differences between similar words, which helps them master the intricacies of their countries spoken language.

Similarly, they also start to understand the importance of sounds in words, and why each individual sound is essential. This is how humans learn to speak so rapidly when they are young.

Unfortunately, dogs are unable to understand these distinctions which makes it impossible for them to talk. Furthermore, it is unlikely that they will ever evolve into creatures with this ability, due to the role they play in nature and our lives.

Dogs are already able to communicate with their owners through their body language, and as such, they have no real need to vocalize (except from barking and other canine-centric sounds).

Based on this, I don’t believe dogs will ever be able to talk.

What would happen if dogs could talk?

Being able to talk with dogs and other animals would change society forever. Not only would we forge much closer emotional ties with them, but we would be able to save their lives more effectively.

When sick or suffering from injury, canines would be able to tell their owners that something is wrong. Unfortunately, a large percentage of dogs show relatively few symptoms when they are sick or hurt, and will sometimes hide their pain or discomfort on purpose.

If we could speak with our beloved companions, we could possibly eliminate the guesswork needed to figure out what is going on with their health.

Similarly, we could also communicate with dogs who display aggression and use that information to figure out what is causing the behavior.

In the long run, this could save many dogs from being shot by law enforcement or scared citizens carrying guns. This could help us to calm them, and identify the steps needed to help reduce their aggressive tendencies.

Alongside this, if dogs could talk, they could warn us of potential dangers. Although canines alert us by barking, dogs who could speak could tell their humans exactly what the perceived threat was.

Unlike humans, dogs have incredible senses that they can utilize to detect dangers before humans are aware of them. This could help people to avoid dangerous altercations with strangers, escape natural disasters before they occur, or find relatives or children who are lost in national parks and other areas.

Lastly, as mentioned previously, dogs would have to gain a major boost in cognitive function to communicate with humans. Additionally, they would have to grasp complicated complex ideas to effectively speak on our level.

Of course, dogs are incredibly loyal to humans, and as such, we would probably still live very close-knit lives with one another.

The main reason our dogs cannot speak or talk comes down to how their bodies and brains are built. Unlike other animals, humans evolved a complex set of voice, hearing, and brain-processing skills that enabled us to partake in sophisticated and complex vocal communications.

Although dogs can make complex sounds and convey their desire for a treat or snack through their body language, their brains are not designed to master complex vocal languages or comprehend the complex laws and ideas that govern our world. But they can understand each other’s barks at a very basic level.

However, it is worth mentioning that our furry friend’s vocal cords are not all that different from ours. Theoretically, if dogs had the cognitive ability to do so, they would likely be able to vocalize in a similar fashion to humans, although their voices might be extremely gravelly and or hard to understand.

The reason for this comes down to their vocal cords being designed primarily for barking, growling, and other deep and far-carrying noises.

That being said, many canines are also able to make higher-pitched noises, especially when startled or frightened, so it is not entirely clear how they would all sound.

Sadly, scientists have never managed to figure out a way to get dogs to talk and have stated that it is currently impossible to achieve. Unless a huge leap in science occurs sometime in the future, teaching dogs how to understand and speak the human language will remain out of reach.

Despite this, some dogs have successfully been taught how to say certain words and phrases, such as “sausages” and “I love you”. However, these vocalizations are only learned imitations and the dogs are none the wiser to what they are saying.

How many words do dogs understand?

Although dogs cannot properly comprehend spoken language, they are by no means unintelligent animals. According to experts, most dog’s mental abilities are close to a human child age 2 to 3 years old.

As a result, they can understand more than 150 words. Additionally, the average canine can learn around 165, especially if their owner devotes enough time to teaching them this.

Unlike other animals, scientists believe that dogs can demonstrate “fast track learning” a trait that was formerly believed to only be present in humans and apes that have developed language. It is also theorized that dogs can count up to four or five, and notice errors in simple computations.

From a young age, our canine companions will develop their own way of communicating with us. By displaying varying behaviors, such as pacing, whimpering, growling, or tapping their feet, dogs can let us know when they are hungry, playful, anxious, or excited.

Interestingly, these traits often differ between dogs depending on their personality or temperaments, with some dogs being more expressive than others.

Just like humans, dogs develop their habitual behaviors and body language nuances, and consequently, will use these to “talk” with their owners.

Likewise, some clever breeds can understand more of the human language than other dogs, listening closely to their owner’s complicated commands and adjusting their behavior accordingly. More often than not, these clever canines play roles in law enforcement or compete in agility and obedience shows.

Despite this, there is no doubt that we cannot truly speak on a one-to-one basis with our canines, and for many owners, this reality is somewhat disappointing.

After all, imagine a world in which we could tell our canine companions how much we love them, talk to them about our problems, or be able to apologize when we accidentally step on their tail or paw – this is the dream of millions of dog owners all over the world.

However, is there a chance that this might come to fruition one day? Will dogs ever be able to speak?