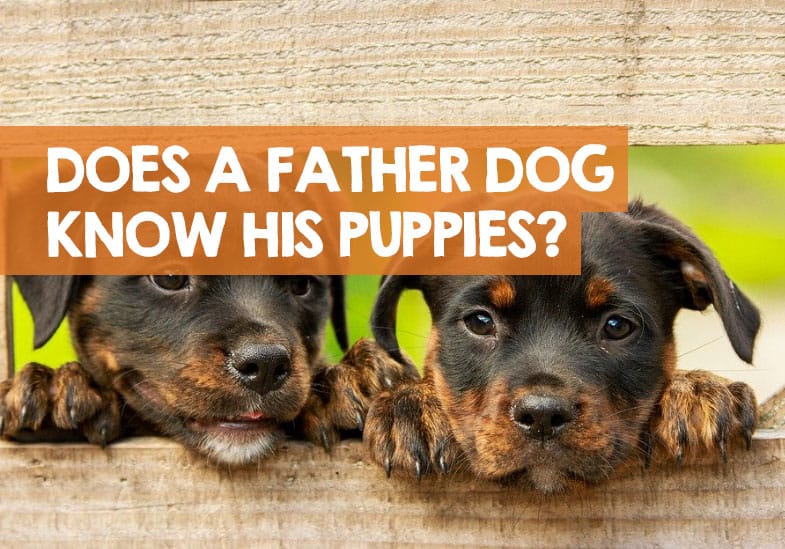 We bought our dog Claude from a local breeder just 2 miles down the road from us. I’d often wondered what might have happen if our dog was to ever bump into either of his parents when out walking locally. Well this morning it actually happened!

Whilst walking Claude at the local park, we bumped into the breeder who was taking the dad out for a walk. This was the first time Claude had seen his father since he as an 8-week-old puppy. I was really interested to see what both of them would do, and if the father dog knew this was his puppy son.

Below I will describe what happened during the father and son meeting, then explain whether I believe dog dads know their puppies and what science says. Here’s the short answer first though:

Does a father dog know his puppies? It’s unlikely that a male father dog would recognize his puppies by scent or familiarity. Most dog dads don’t even get to meet the puppies at birth, and so don’t have the paternal bond that a dog mother might have maternally.

This is what happened when our puppy met his dad

Our dog behaved just like he would with any other male dog when meeting his father. He acted all submissive to see if dad was interested in play, which he was. The two dogs then ran around together chasing.

There was nothing in the body language of the day dog to suggest he might recognize my dog was his puppy and offspring – of course, who knows what was going through the dog’s heads though.

Do father dogs know their puppies or adult offspring?

It’s key to remember here that the breeder of our dog kept the father away from the puppies for most of their short time in his care. That means that the reality is, Claude the dog probably only met his dad once or twice as a puppy before he became ours.

This is typical with most puppies, as dog families don’t stay as a family group for very long. Most puppies will be in their forever homes at 10 weeks of age, probably having never even met their own father.

With my dog though, would these couple of meeting during his formative weeks be enough to either create a bond, a memory, or something to make the male dog know his puppies?

I don’t think it would.

The way that father dogs interact with their puppies is very different to that of mother dogs. The females carry the puppies, then give birth and then care for them for at least 8 weeks.

During this time, scientists believe that mothers can create a bond and familiarity with their puppies, picking up on scent clues years down the line that the puppy is theirs.

This was the conclusion after research by Peter Hepper of the School of Psychology at Queens University in Belfast, Northern Ireland.

“78 percent of the mothers sniffing the cloth containing the scent of her offspring longer than they sniffed the scent of an unfamiliar dog of the same breed, age, and gender. So obviously canine moms recognize their offspring even after they are adults and after a long separation.” (view source)

The theory is that as dogs have become domesticated, they no longer exhibit the same pack mentality their ancestors had; now being focussed as individuals rather than the pack.

Because of this, and the father’s lack of input when the puppies are born, I think it’s a fair assumption to assume a dog dad does not know his puppies or adult offspring.

Another reason I believe that father dogs won’t know their pups is how canines don’t adhere to basic social psychological principles. For example, you could put a male dog in a room with his own mother, and he could try and mate with her.

To me, that suggest to me that male dogs lack the ability to recognize their own biological relatives including their adult children or puppies.

But there could be an exception to the rule

The only time that I suspect a male dog might recognize his offspring is if he spent a lot of time with the puppies from birth.

Dogs recognize other dogs by using scent, so if the puppy grew up with the dad for a good period of time before being parted, then yes, they could know each other.

However, this utopian view of human fatherhood projected onto dogs rarely happens in reality.

What about father dogs who play with their adult offspring?

But what about those people who say that father dogs do know their puppies? Well, admittedly just like me they are no basing this on any scientific evidence, but instead how they see the two dogs interact with each other.

It’s tempting to believe that your dog is recognized by his father dog, but my view is it’s just classic dog behavior you are seeing. Dogs love playing with other dogs, so for me, this isn’t a sign a father dogs knows his puppies, but instead just what dogs do; play and interact.

This is what I saw with my own dog Claude as he ran about and played with his own father when we met him in the park.

Whilst researching for this piece (which you may or may not agree with), I discovered other interesting things about father dogs and their puppies.

Can the father dog be around the puppies?

Male dogs don’t have the same parenting instincts as mothers do. Many breeders believe that the mothers probably don’t want the fathers around for a few weeks after birth, as this could interfere with her tending to the puppies.

There is also a risk that father dogs can be rough with the small puppies, so it’s wise to limit the father dog being around them during he first few weeks.

Why do father dogs attack their puppies?

This isn’t true all the time, but occasionally father dogs can attack their puppies. It’s due to dominance, with the new male puppies presenting a potential threat of competition for any eligible females, e.g. the mother.

Male dogs don’t recognize puppies as their own, so can attack them to establish the pecking order and dominance.

It is very unlikely that male dogs recognise their offspring, especially when they have been apart for a number of years like my dog and his dad were.

Even with young puppies where the father is present, it’s unlikely the dad would go onto recognize the offspring years down the line.

I love researching into the psychology of dogs and hope you like reading about what I find. Here are some related blogs you might find interesting.