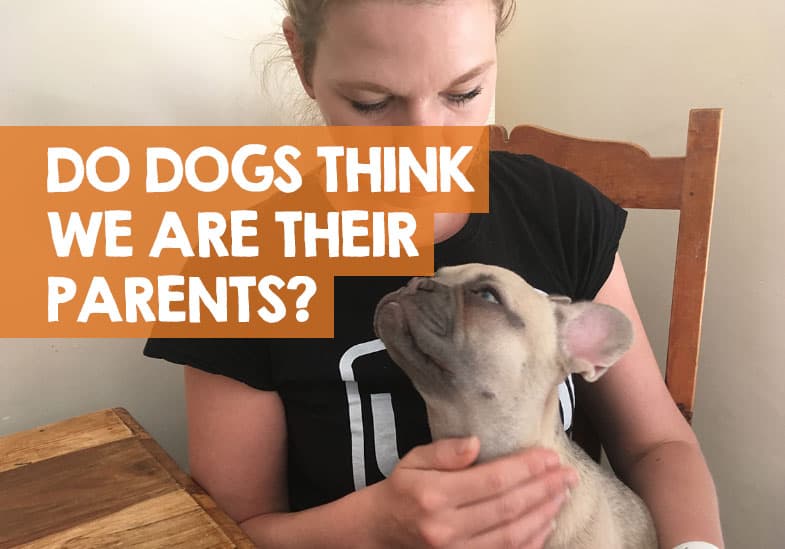 Dogs owners will often project their own human emotions onto their pets, a classic example being where we like to assume parental roles. We all know someone who views their dog as their “baby” and almost like a child. But how does it work from the opposite direction; do dogs think we are their parents or are we more of a pack leader?

I decided to look into what scientists have found, plus canvassed the opinion of the dog owners I know to see what they all think. The bottom line is, we don’t know for certain if dogs think humans are their parents, but here’s what the current thinking is from multiple sides of the fence.

Do dogs think you are their parents?

What the scientists say

Whilst researching I found two pieces of research that could point you towards believing dogs think we are their parents.

The first study in 2013 looked into the relationship between dogs and their owners and found that it’s a very similar bond to that found between children and their parents. The scientists at the Vetmeduni’s Messerli Research Institute, Austria found that dogs were very similar to young kids:

“Dogs and children seem to share what is known as the secure base effect. This effect is seen in parent-child bonding as well as the bond between humans and dogs. This refers to the idea that when human infants interact with the environment, they use their caregivers as a secure base.”

During the research the scientists were able to show that dogs were much more confident and self-assured when in the presence of their owners, just like kids are. In other words, the dog owner acted as a safety net and security for the dog.

Another part of the experiment involved leaving the dog alone in a room with a piece of their owner’s clothing. The dogs would paw at the item and try to be nearer to it. Again, this is like a toddler or young child needing the security of having their parent near by.

The second study from 2015 looked into canine social behavior. One of the researchers being the study, Attila Andics, told the Mic.com website that:

“Dogs interact with their human caregivers in the same way babies do their parents. When dogs are scared or worried, they run to their owners, just as distressed toddlers make a beeline for their parents.”

I’ve seen my dog behave in this exact same way!

Despite the findings of both of those studies, they are not absolute proof that dogs think you are their parents. However, they do show that dog’s exhibit behavior that closely mimic the way we see human children behaving with their parents.

Handy Hint: There’s no scientific proof that dogs understand when their owners die, but there’s a lot of anecdotal evidence to suggest they do grieve.

I personally believe dogs do see humans as parents. My view on this is based on the way in which my own dog behaves around me, rather than any real scientific reason. For example, there are certain behaviors he exhibits towards me which are akin to a child and parent, such as:

Another reason why I believe dogs think humans are their parents is because it’s unlikely that they will remember their own mother. If you think how young a puppy is when you typically take it home, it’s not going to remember its mother surely?

I can only compare it to how children who are adopted as babies or young toddlers won’t have any recollection of their birth parents. I am guessing it would be the same with puppies who leave their mother at 8 weeks of age.

This make sense to me, because if you take the belief that 1 human year is the same as 7 dog years, that means an 8-week-old dog equates to 2.5 human years.

Whilst human babies and puppies are different, if you did take a two and a half year old child from its mother, it’s unlikely it would remember as it grew older. It’s possibly the same with dogs too?

But what do scientists say about dogs remembering their mothers….?

Does a dog remember its mother?

If dogs think we are their parents, does that mean they can’t remember their own mothers? Perhaps not, as according to the Psychology Today website, dogs do recognize their mothers due to scent remembered from being puppies.

In the tests, the scientists placed scent down of the dog’s mother, where the dog had not seen it’s mother since being a puppy in the litter. Here’s a quote from the researchers:

“As far as the data is concerned, it appears clear that a dog, even as an adult, will still recognize its biological mother. However, although that answers the initial question concerning a dog’s ability to remember his mom after a long separation it does not tell us how that former puppy, having now reached adulthood, will act around its mother once they are finally reunited.”

It’s worth reading the article, as it makes for very interesting reading.

But what about if a dog hasn’t been given a scent-based clue, do you think it’s possible they are still able to remember their mother without the stimulus?

I am not so sure myself and believe that they probably don’t consciously think about their parents. I could be very similar to how a human child that is adopted doesn’t think and remember their parents when adopted from a very young age.

I also read something that explained how certain dog breeds have the cognitive reasoning of 7 year old humans. Based on that, a dog might not think too much about their mothers, where they came from, instead seeing humans as their parents.

Do dogs know the difference between humans and dogs?

Some people sit on a different side of the argument and believe their dog either thinks the owner is another dog or thinks that they themselves are human.

This is probably not true, because if you look at how dogs behave around other dogs, it’s all based around scent including butt sniffing. They don’t do that to us, so it’s very unlikely that your dog think he’s human, or you are another dog!

Handy Hint: You might enjoy these studies which explain whether dogs remember their mothers or not.

What other dogs owners say

I always like to get different opinions when discussing aspects of canine behavior such as this, so put a call out onto social media. Some people even went so far to say that dogs think of humans as gods!

“I doubt very much that dogs think you are their parents, and this is from owning dogs for more than 20 years. I believe that dogs see humans more like captains in a structured hierarchy rather than in a parental or motherhood role.”

“Dogs definitely see humans as members of their family. There are some people that believe that where humans are in the position of power, controlling food, water, and habitat, dogs consider them in almost god-like status.”

“I believe that dogs think of humans as gods, not just parents! Think about it; they rely on us for everything and we provide them with unbelievable things like treats, playtime, and security. Perhaps being compared to gods is a stretch in truth, but definitely we’re looked upon as a mother, father, or parents to the dog.”

“Dogs think of humans as their parents, just like a kid who is adopted does. Whilst they might understand and remember they have a biological mother, and possibly even remember the trauma of the separation, they will grow to think of us mom, dad, and parents. They become part of the larger family and understand their place in the hierarchy.”

“I can’t say for sure if dogs see us as their parents, but I definitely think they consider us part of their pack. Dogs look to us with love and affection, you will see this when they greet you at the door, and they follow us around like a little kid. That’s good enough for me and I love my role of being my dog’s human mother.”

Dogs are very simple creatures at heart. They crave their owner’s love, comfort, and all those tasty treats and food you give them. The way in which they interact with humans make many people ask whether dogs and puppies think their owners are their parents.

My personal belief is that dogs do think of us as parents, but probably on a very different and unconscious way compared to human children.

The studies I have looked into certainly show that a dog’s feeling towards their owner can be very similar to that of a child’s. They want their human parents to give them security and reassurance – just like parents should do to their children!

Trying to figure out what dogs are thinking is a fascinating subject, and I’ve covered some similar topics in the past which you can read below.