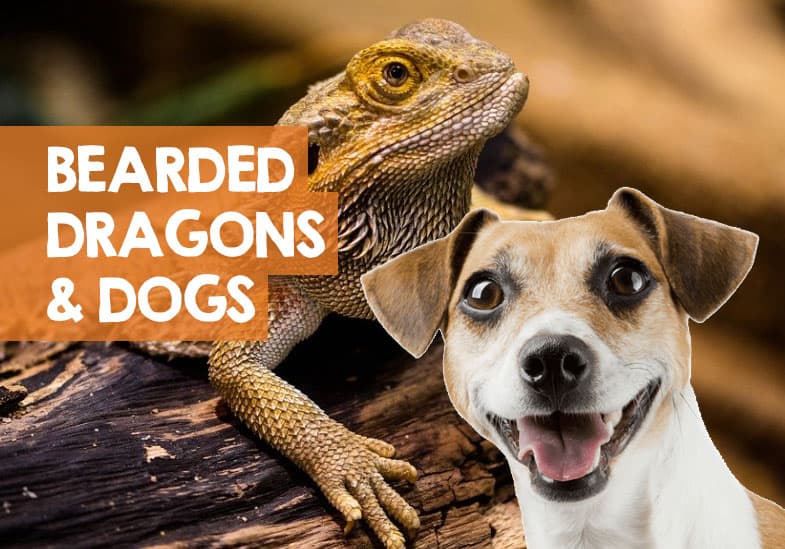 As a kid I went through a phase of being into reptiles and bought a bearded dragon. Much to the alarm of my mother it was soon scurrying around my bedroom. She thought it was madness considering we already a dog in the house.

Thankfully my dog got along just fine with the bearded dragon and there were never any instances where things went awry. But I might not have been this lucky. There’s every chance that my dog could have eaten my beardie, or even the beardie hurting the dog.

After all, dogs have natural instincts that are ingrained into them, and that will often mean attacking or biting what it considers either a threat or prey.

With this in mind, I wanted to recall some of my memories from my youth of how my bearded dragon got along with my dog, followed by more practical and sensible advice on how you should be very careful.

Will my dog eat my bearded dragon?

My personal experience showed that bearded dragons and dogs can get along. But don’t think this will be a consistent experience across the board – all dogs are different, with different personalities, different breed characteristics and ways of reacting.

Based on that, you have no guarantees that your dog won’t eat your bearded dragon. sDogs have natural instincts to hunt prey. For example, the dog I own now is a ratter, and bolts as soon as he sees any type or rodent or critter to try and catch it.

Dogs will also bite out of fear, when cornered, scared, and threatened. Whilst bearded dragons are considered to be relatively docile and non-aggressive pets with slow movements, it’s not a creature that most dogs will have encountered before.

Because of this, the way a bearded dragon behaves around your dog could result in an attack, and possibly even result in your dog eating the reptile.

What happens if a dog eats a bearded dragon?

If your dog does manage to eat your bearded dragon then it’s like that the dog will be sick and puke it up. If he goes on to digest the beardie, there is also a slim chance he will develop a bacterial infection.

It’s unlikely that your dog will die from eating a beardie but could get given a nasty bite by the reptile – more about that later.

What about beardie poop?

Don’t let your dog eat your bearded dragon’s poop. As with all animal feces, as there’s a slim chance that it could carry salmonella poisoning.

Do bearded dragons get along with dogs?

When I was a kid, my experience was a positive one, but I think most of that was down to luck. I had a chilled out beardie and a dog that was extremely docile with no predatory instinct in him whatsoever.

But that doesn’t mean all bearded dragons are good with dogs.

In fact, the way that your dog moves could make the bearded dragon scared. We’ve all met those dogs that are skittish, particularly so as puppies.

Whilst bearded dragons aren’t aggressive most of the time, you could get a bad reaction if your dog scares them. The reaction from the reptile could possibly result in your dog reacting back with biting and possibly eating… not a nice situation to consider.

In conclusion, whilst it is possible for bearded dragons and dogs to get along, for me it’s not worth the risk or letting them share a floor space. It’s an accident waiting to happen.

What other people say

I didn’t just want to give you my view, but also that of other people. I explored some reptile forums to find other popular comments on the topic. Here’s a selection of the most useful.

“I would never allow a lizard or bearded dragon to roam on my floor if there was a dog in the room. No matter how laid back you think your dog is, the beardie will get stressed out and think of the dog as a predator. I think all you would do is scare your lizard, not worth it.”

“Don’t let Yorkshire Terriers near beardies. My friend has a Yorkie and it’s a dog breed that used to be used to hunt rats. This dog will attack and kill the beardie, no doubt about.”

There are rare exceptions where bearded dragons are okay with dogs, but I stress, it’s rare. Animals getting along like this is simply the stuff of Disney movies. The bottom line is that instinct is the hardest behavior to change in any animal, and a dog can attack in a split second with no warning. Do not keep a bearded dragon and dog in the same room.”

“From a beardie’s perspective a dog will be a predator. All it takes is for your bearded dragon to run away scared to make the dog chase it. Dogs are hard-wired in the brain to chase small things when they run, so you’re setting yourself up to fail.”

But what about the other way around? Should you be worried about bearded dragons hurting dogs with a bite, or possibly poisoning them and killing them?

Are bearded dragons poisonous to dogs?

This is where things could be a little different. There are a couple of things you need to appreciate about bearded dragons and the risk of poisoning.

Firstly, if your dog did attack and eat your bearded dragon, there is a risk of contracting salmonella poisoning from the reptile. Some beardies even carry parasites which could be transferred to the dog orally.

Signs of salmonella poisoning in a dog include:

Secondly, research published in 2005 found that contrary to previous beliefs, bearded dragons do actually carry venom in their bites. However, the level of venom is extremely small, and certainly not enough to poison an average-sized dog.

The scientists said that:

“If you were a 5 or 10 gram mouse it would be different, but the venom from a monitor lizard is not going to kill a human being.”

My takeout from this is that even the smallest of dogs won’t get poisoned by a bearded dragon bite, but… there is the possibility of an allergic reaction due to the low levels of toxic venom.

However, I would say the risk of a bearded dragon poisoning your dog is low if you have a healthy dog. The risks are probably higher with young puppies and sick dogs with a low immune system.

Handy Hint: If you are thinking about getting a dog or reptile, you might also like my guide explaining the risks of skink lizards to dogs.

It’s actually very rare for one to bite unless provoked or in fear. And this is where things can get a little complex, as your dog might be curious and over-exuberant with a bearded dragon, receiving a bite in the process.

Whilst we’ve already established that the bite is unlikely to poison a dog, it could injure them with a hard and prolonged bite. There’s certainly every chance of blood being drawn, leading to swelling and bruising.

But is a bite from a bearded dragon enough to kill a dog?

I don’t believe so, unless it’s an extremely small dog and the bite possibly hit the throat area.

The chances of a bite happening is already slim enough, and then the strength of the bite being enough to kill is also low. This means that when you add the probability up, it’s very remote.

How to introduce a dog to a bearded dragon

I’ve included some short tips here on how to introduce a bearded dragon and dog. Before I go on though, something important: never leave them alone together. Animals are unpredictable, and whilst you might think your dog won’t eat your beardie, you never have any guarantees.

That’s not to say that dogs and bearded dragons can’t get along. They can, and there’s ample proof on YouTube of them co-existing together, you just need to be very careful.

Here are some tips on how to introduce them to each other.

1. Keep them apart at first

Your dog will be far more curious about the bearded dragon than the other way around. The initial intro should be you holding your dog up to the tank and repeating this a few times a day for a week.

By the end of the week, your dog might even be bored of the beardie, so what you can then do next is take the reptile out of the tank.

The second part of the intro will mean letting the bearded dragon walk on your floor but having your dog on a leash being held a few feet away, being unable to get to the reptile.

Continue to have your dog on a leash until he gets bored of the bearded dragon and his attention turns elsewhere.

2. Hold the beardie tight in your hands

Once you’re comfortable with this part of the process, I would then hold your bearded dragon firmly in your hands, and lot your dog come and sniff at him to see what the big deal is all about.

You know your dog better than anyone, so you should be looking out for any obvious signals that things could go wrong.

For example, raised hackles, a snarl, a narrowing of the eyes, and their ears going back. All these could be the body language that means there is a problem developing.

Whilst your bearded dragon and dog might appear to be the best of friends and get along just fine, don’t risk a thing.

Leaving them alone in a room together, or even you just turning your back for a second and losing concentration could be disastrous.

No matter how well trained or behaved your dog is, they all have the propensity to revert to their natural instincts of attacking prey or biting when feeling threatened.

You will always hear about bearded dragons getting along with dogs, but this really is the exception to the rule. There’s always a risk that your dog will eat the beardie; it’s nature after all.

Yes, I made it work when I was a kid, but I’d not be so blasé about something like this these days. Ultimately, dogs and lizards are not designed to co-exist together.

Here are some more posts about different animals and insects that could be dangerous to your dog: