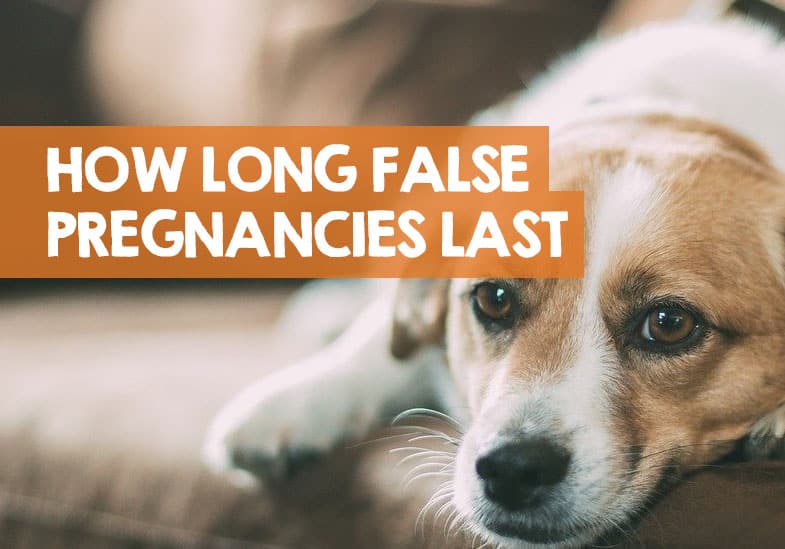 False pregnancy can be a very confusing time; not just for your dog, but also for owners. The whole concept of a phantom pregnancy (also known as pseudocyesis or pseudo-pregnancy) is a very odd one to grasp. But once you know why it happens, and how long your dog’s false pregnancy will last, it’s a lot easier to get your head around.

If you’re new to this phenomenon, here’s a very quick primer on what to expect with your dog’s phantom pregnancy, and how it will last for.

How long does a false pregnancy in dogs last?

Most phantom or false pregnancies in dogs can last from 7 to 21 days. If your dog’s false pregnancy lasts longer than 3 weeks to a month, you should get advice from you vet, as anything over time period is deemed to be unusual.

If you dog does have a phantom pregnancy, you can expect to see behavioral and physical changes happening. A false pregnancy will typically start 6 to 12 weeks after your dog’s last heat cycle.

However, false pregnancies can even occur with dogs who have been spayed. Whilst extremely rare, this can be the case if the spay procedure was performed whilst the phantom pregnancy happening, the pseudo-pregnancy possibly continuing for several weeks after.

But the bottom line is this; phantom pregnancy in most dogs will last from 1 to 3 weeks, possibly a month at the most. Anything more than this is rare and should be the point you ask for veterinary advice.

How long will false pregnancy milk last in dogs?

Milk production is one of the oddest aspects of a false pregnancy, but at the same, one of the most obvious signs. Your dog’s body is mimicking a real pregnancy, and this will manifest itself with lactation.

However, it might take a week for the false pregnancy milk to dry up completely after all the other phantom pregnancy signs have disappeared. Just like a real pregnancy, milk should stop being produced once the dog’s body says it’s no longer needed.

How do I dry up my dog’s milk from a false pregnancy?

Your dog’s false pregnancy milk should dry up naturally within 7 days of her phantom pregnancy ending. Dog milk is very much produced on a supply and demand basis, so if your dog’s body doesn’t think it’s needed anymore, it should no longer occur.

If she is still producing milk after 4 to 5 weeks of the false pregnancy symptoms starting, you should seek further support from your vet.

Letting things come to a natural end appears to the best course of action, but I did find alternative advice online I can share with you:

For example, the Blue Cross say you should not stroke or bathe your dog’s teats. Doing so can mimic puppies nursing, meaning more milk is produced. Avoid this completely and your dog’s false pregnancy milk should dry up quicker.

There are also pills that vets can prescribe for pseudopregnancy which will stop your dog producing milk. One such drug is cabergoline (see study) which is used to dry up milk in canine mammary glands. Another option vets use are diuretics to stop milk production.

I also found advice on the Dorwest website which recommended the following:

Obviously, this advice has to come with a pinch of salt, as they are trying to sell this remedy to dog owners.

Personally, I have never used homeopathic remedies with my own dogs so please do ask your vet before administering any form of medicinal product, even if it is herb based.

What is a dog false pregnancy?

Phantom pregnancies happen when your dog’s body believes it is pregnant. It occurs to due to a hormone imbalance, usually 1 or 2 months after your dog’s last heat period.

What are the symptoms of a phantom pregnancy in dogs?

Your dog’s false pregnancy can last from 1 week to possibly as long as a month, and during this time she will exhibit all the usual signs of pregnancy including:

Is false pregnancy in dogs dangerous?

A false pregnancy in a dog is not dangerous. In fact, it’s statistically safer than a real pregnancy. There are no puppies in the womb or the potential of a birth with complications.

Whilst a phantom pregnancy itself is not dangerous to your dog, it can be uncomfortable and distressing to her.

If your dog continues to have false pregnancies, this can lead to longer term health issues such as:

How can I help my dog through a false pregnancy?

Whilst most dogs with a pseudocyesis will get over it quickly, with no adverse effects, it can last longer with some dogs, and be uncomfortable. As an owner you can help your dog a little with the following tips:

How common is false pregnancy in dogs?

According to research, false pregnancy in dogs is very common. Scientists found that 50% of un-spayed dogs will develop a phantom pseudopregnancy at some point in their life (see source). There are certain breeds where this estimate increases to 75%.

Dogs who have had a false pregnancy once are also more likely to get one again. Some dogs will even experience false pregnancies every season.

Some vets believe that false pregnancy in dog is so common that it happens after every heat cycle to a small degree but will pass un-noticed.

The majority of dog false pregnancies will only last a few weeks. Anything longer than that can require professional treatment. Vets will often recommend that you reduce the food and liquid in order to stop the production of milk. There are also drugs they can prescribe.

However, the majority of false pregnancies are very mild, and will soon pass.

Here are some more articles about canine pregnancy.