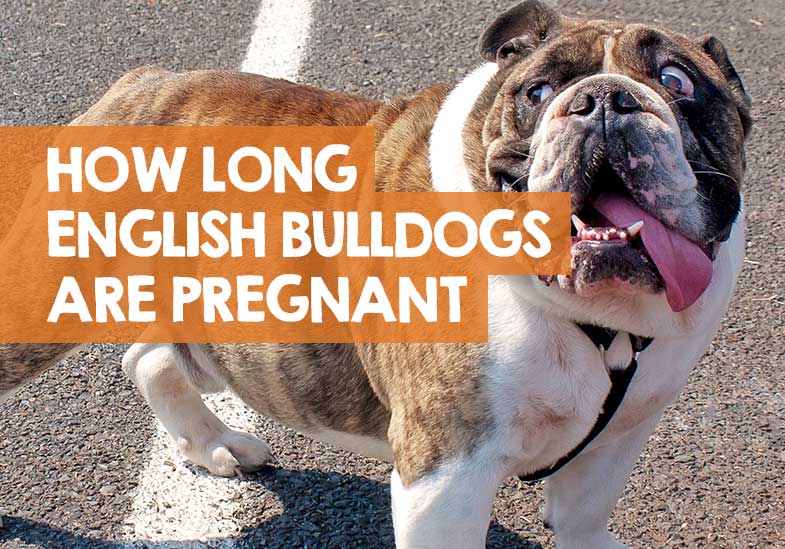 Whether you are purposely breeding your English Bulldog, or yours has become pregnant by accident (in what would be rare circumstances), you will need to be prepared. But how long do you have to prepare? How many days are English Bulldogs pregnant for and when can you expect the puppies to arrive?

How long is an English Bulldog pregnant for? English Bulldogs are pregnant for 63 days or 9 weeks on average, although this may vary by a few days depending on several factors. A veterinarian will be able to run tests to more accurately determine how far along the pregnancy is and when a dog will give birth.

How many days are English Bulldogs pregnant for?

Across all breeds, dogs have a pregnancy gestation period of around 2 months (around 63 days), and this is the same for English Bulldogs; with the length of the pregnancy measured from when the fertilized egg embeds itself into the lining of the uterine horn.

But what are the different stages of the pregnancy, what are the symptoms and how do you properly care for a pregnant bulldog before, during and after labour?

Dogs have three trimesters, all of which will last around 3 weeks.

Once the eggs have been fertilized over the period of a week after breeding has occurred, between the 2ndand 3rd week they will embed themselves into the wall of the uterus. This is when the first signs of an English Bulldog pregnancy can start to occur, with your dog becoming more affectionate or irritable.

Implantation and the early development of the embryo begins at around week 3, with their mood changes becoming more pronounced, as well as changes in appetite and development of breast tissue.

The developing foetuses can be physically felt in the uterus at around week 4, which is when their spinal cord and facial features begin to develop (the mother’s uterus will also begin to fill with liquid in order to protect the foetuses, which will mean that you cannot feel them. Don’t worry, they are still in there).

Their heartbeat will begin to be heard after the first month of the pregnancy.

The foetuses will begin to actually look like English Bulldog puppies at around week 5, with their legs and toes developing. Your dog’s belly will begin to have a noticeable pregnancy-bump, and their appetite will decrease. They will begin to develop their pigmentation and eyelids on week 6.

The puppies will reach their birth-size at around week 7, when they will be physically feelable inside the abdomen of your dog. This is a sign that the pregnancy is coming to an end, and that you will need to start preparing to welcome the litter.

Handy Hint: If you are planning on breeding your Bully you will need to know about the English Bulldog heat cycle. Read that guide to see how to prepare for it, how long it takes, and what signs you need to look out for.

Week 8 will see your dog preparing for the birth, showing nesting behaviour and with the puppies moving around within the uterus as they prepare to leave.

At week 9 the puppies will be ready to be born and labour will begin. Keep checking their temperature with a rectal thermometer. While their normal temperature being around 100°F, once it drops to 97°F for two consecutive readings that is the sign that labour will commence with the next 24 hours.

Be with your dog to help with the birth, which can take between 3 and 12 hours for the full litter, helping to clean the puppies and unite them with their mother.

However, most English Bulldogs will deliver via c-section. It is very dangerous for them to have a natural birth.

If you would rather have them birthed in a more professional setting, ask your vet about what veterinary hospitals could assist in the labour. I do recommend c-section. This is how most English Bulldogs give birth.

How many puppies do English bulldogs have?

While an average dog litter is around five to six puppies, this can vary depending on the breed of dog. English Bulldogs typically have a litter of around three to four puppies, with your vet being able to identify the amount as they begin to more noticeably develop, with X-rays taking place at around the eighth week. You can read more about the English Bulldog litter size in this guide.

However, sometimes ultrasounds and X-rays are not 100% accurate, meaning that there is a chance that the litter may be bigger or smaller than originally suspected.

Handy Hint: Don’t buy an English Bulldog without doing your homework first. Here’s what you need to know before you buy, plus some questions you should always ask the breeder.

You will often be able to tell once the labor has finished, with the mother becoming more relaxed and is no longer straining. However, if you believe there are still puppies inside her, if she does not give birth to another within the next four hours, call your vet for assistance.

Once the birth has occurred, take the puppies and put them in a warmed box, only putting them on their mother for nursing. Make sure the dog can see the puppies but keeping them separated is safe because English Bulldogs are often not instinctive mothers at first, with it being very common for them to sit on and squish their puppies.

They can be reunited properly once the puppy’s eyes begin to open, with your Bulldog often being very happy to fully take over their care and feeding.

How can you tell if an English bulldog is pregnant?

All that being said, how do you tell whether or not your English Bulldog is pregnant? If you specifically want your dog to have puppies, or if it is more unexpected, there are several signs and symptoms to watch out for as early as the first and second week of the pregnancy.

Can an English bulldog give birth naturally?

Because of their history of breeding, certain Bulldogs struggle to give birth naturally, with French Bulldogs often needing caesarean sections because of their narrow hips.

English Bulldogs are much the same, with 95% of bulldogs needing C-sections in order to give birth safely. This is because the birth canal of the dog is often not big enough to properly, safely allow the puppies to pass through and can prove fatal for both the puppies and the mother.

However, some English Bulldogs can give birth naturally, although repeated litters by breeders are usually done through C-sections as a safety precaution. I

f you are concerned about whether or not your dog will need to have a C-section once labor commences, speak to your vet who will be able to recommend whether an unassisted birth or a medical procedure is needed for your particular dog.

If your dog is currently in the middle of labor and you are worried they are struggling, please phone your vet immediately for medical aid.

At around week 8 of the pregnancy, your dog will begin to show signs of preparing for labor, often called ‘nesting behaviour’. This is often shown through restlessness, making and remaking their bed and losing their appetite.

Once labor properly begins, your dog will begin to start to pant, as well as begin to pace and move around. Keep an eye on her and regularly check her temperature with a rectal thermometer.

Once the temperature drops from 100°F to around 98°F, this is a sign that the delivery is due within the next 12 to 24 hours. If you are going to the vet for delivery, this is when you should set off.

Once your dog has begun her labor, she may become increasingly agitated and digging her bed, as well as vomiting. This is when you need to be by your dog, monitoring her progress.

Labor can last between 4 and 24 hours. If you are noticing her is straining too much or passing greenish discharge, call your vet immediately.

Once puppies start coming out, they will be covered in fluid which the dog will break and lick the puppy to stimulate them to start moving. However, if your dog is exhausted, they may not have the energy, meaning you will have to do this for them, using a hand towel to break the sack and wipe their nose.

If the puppy is not breathing, wipe them more vigorously to help stimulate their breathing response (don’t worry about them being fragile, the rubbing needs to be forceful.)

In emergencies, you may need to perform CPR (see how) or rescue breaths. If it has a heartbeat, place your lips over the puppy’s mouth and blow gently. If there is no heartbeat, place the puppy on a solid surface, wrap your hand just below their front legs and press your thumb down on the front of their chest several times in a row.

Also, call your vet for help as they will be able to provide you with instructions on performing CPR as well as helping with other areas of the labor.

However, this is the most important symptom in a labor as it indicates that your dog will begin to give birth within the next 12 to 24 hours.

Once this has happened, you need to start preparing for imminent birth, preparing a whelping box and taking your dog to the vet if you are having an assisted birth at the animal hospital.

If you are a new breeder or suspect that your dog has become expectedly or unexpectedly pregnant, then that is great news! English Bulldog puppies are adorable and are no more difficult to care for than other breed’s puppies.

However, it’s not something I recommend if you aren’t a breeder as looking after a pregnant bully can be hard. It’s not just about knowing how long they will be pregnant for, but caring for them during this period, and then dealing with the big day itself.