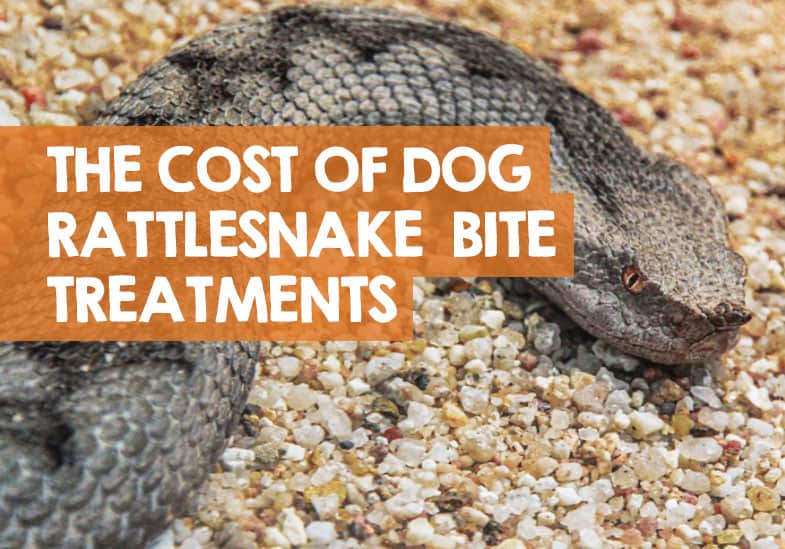 If you own a dog and live in a part of the country where rattlesnakes inhabit, you’ve probably heard of the dog rattlesnake vaccine by now. It was invented by Red Rock Biologics and licensed for use in 2003. Since then it’s been administered to thousands of dogs around the United States.

I won’t be exploring the pros, cons, and effectiveness of the vaccine treatment too much, but instead will focus giving you details on how much the rattlesnake vaccine for a dog will cost.

There has been some debate on how effective the vaccine is, and you can read a scientific study conducted in 2014 if you want to make your own mind up.

But back to how much the rattlesnake vaccine for dogs will cost. Here are some guidelines to pricing, followed by how much it costs to treat a dog’s rattlesnake bite injury.

How much does the rattlesnake vaccine for dogs cost?

The rattlesnake vaccination is said to offer protection for up to 6 months, so you should ask your vet to put the boosters into your dog’s annual vaccination schedule.

Please don’t think that the vaccination is a replacement for immediate medical treatment should your dog get bitten by a rattlesnake. If your dog is bitten you should get him to a vet as soon as you can for professional assistance.

The manufacturer of the vaccine also recommends this, saying:

“Even after your dog is vaccinated against rattlesnake venom, she should be taken to a veterinarian for evaluation and care as soon as possible following snakebite. Veterinarians can determine whether your dog will require additional treatment. Even bites by non-venomous snakes can lead to serious infections and antibiotic treatment may be needed. A veterinarian is the best person to consult regarding medical decisions for your dog.”

When you are weighing up the cost of the dog rattlesnake vaccination, compare that to the cost of what prolonged and in-depth treatment would be.

If there’s a chance that these vaccination injections could help your dog in the event of a bite and reduce vet costs, it’s worth it.

How much does it cost to treat a dog for rattlesnake bite?

It can cost thousands of dollars to treat a dog for a rattlesnake bite. As well as the antivenom which will cost a few hundred dollars, your dog might also need additional treatment such as pain killers, antibiotics, antihistamines, anti-inflammatories, oxygen, IV drips, and a vet hospital stay.

If the bite was not as serious as it could have been, then your dog might only have to have a short trip to the vets, and a shot of rattlesnake antivenom which won’t cost as much.

In the most serious of cases, dogs might need surgery after a rattlesnake bite to cure the tissue and organ damage. The cost of rattlesnake treatment in this case will be huge and depends on what’s needed.

The bottom line is, please make sure your dog is insured for snake bites. If not, you could be in line for a vet’s bill of $5,157 like this dog owner was after a series of bites were treated for.

How much does rattlesnake antivenom cost for dogs?

Part of your dog’s treatment after a bite will rattlesnake antivenom. A vial of the antivenom could cost anywhere between $450 to $1,000 depending on where you live in the United States.

Depending on the seriousness of the bite and how your dog has reacted to treatment, it could require additional vials of rattlesnake antivenom, meaning the costs will start to multiply.

Is dog rattlesnake vaccine worth it and safe?

Before you use it on your own dog, please do your own due diligence and speak to a vet. There are multiple examples online of vets and dog owners saying that the vaccine works, but also some that cast doubt on the effectiveness.

I have compiled a few of those quotes below. For example, the study I referred to at the top of this article said:

“No statistically significant difference in morbidity or mortality between vaccinated and unvaccinated dogs was found. The findings of this study did not identify a significantly protective effect of previous vaccination in the cases of moderate to severe rattlesnake envenomation that require treatment with antivenin.”

I also read a report on the Science Based Medicine website who concluded the following in a 2018 editorial piece:

“Could it work? It’s somewhat plausible. I would not trust it to save my dog’s life. I don’t currently recommend it. The only way I would consider using this product would be if rattlesnake avoidance was completely not possible, and even then, I would make sure the owner knows that if their dog is bitten, they need to not expect the vaccine be helpful and get them a veterinarian with antivenom right away. To be fair, the manufacturer says as much in their brochure.”

There are then the consideration you would have over safety. Another editorial piece, this time on the Embrace Pet Insurance website said:

But as I said, there are also plenty of sources which counteract these statements so please read them all before making a decision on whether the cost of the rattlesnake vaccine for your dog is worth the price.

What might sway you is just how common the vaccine is now, with this final statement certainly putting things into a different light:

That’s a lot of vets putting their trust into it which has to hold a lot of weight.

Rattlesnake vaccination shots for a dog don’t cost a lot in the grand scheme of things. They certainly cost a lot a lot less than treatment does, so it could be something that saves you money if the worst was to happen.

I have produced a lot of helpful guides about dogs and snakes over the last month, and here are some highlights.