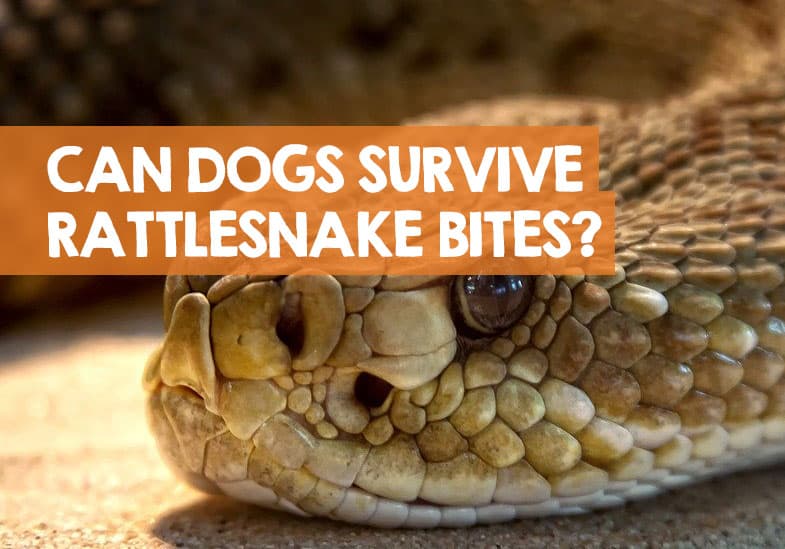 There are 25 types of venomous snakes in North America, but none have as fearsome a reputation as the rattlesnake. It’s estimated that up to 5 people a year will die from rattlesnake bites in the United States. Dogs are just as much at risk, and if not more so due to the way they will encounter this deadly reptile.

But what happens if your dog was to get bitten? You could be out in the wilderness with no access to immediate veterinarian help. If this was to be the case, can a dog survive a rattlesnake bite without treatment?

I decided to look into the statistics of rattlesnake bites and dog survival rates to see what the truth was, and how worried you should be if you don’t have access to quick treatment or an antivenom. Here’s what I discovered.

Dogs can survive rattlesnake bites but have higher survival rates depending on being given swift medical treatment. Vets will be able to administer an antivenom, which is said to be most effective when given to a dog within 4 hours of being bitten. For the best chance of survival your dog needs to be seen to within 30 minutes.

A rattlesnake bite is one of the biggest medical emergencies your dog could face. If given the right treatment and quick enough, dogs can live from a rattlesnake bite, with survival rates said to be between 80% and 90%.

Rattlesnake bites in dogs are life-threatening and painful, but the prognosis is good providing the dog is seen quick enough and treated with antivenom.

How long will a dog live after a rattlesnake bite?

Most dogs will live a full and healthy life after a rattlesnake bite if treated with antivenom. If not treated, and the bite was venomous enough, a dog’s bodily functions will start to shut down, leading to a painful death strung out over a period of a couple of days.

Handy Hint: I’ve also written a guide which includes the fatality statistics for dogs that have been bitten and killed by copperhead snakes.

How are dogs treated for rattlesnake bites?

To ensure your dog lives after a rattlesnake bite, the vet will administer an antivenom injection. Other medications can include anticonvulsants, antihistamines, pain relief, and anti-inflammatories.

With more serious bites, your dog might also receive oxygen support, corticosteroids and IV fluids and antibiotics to prevent infections, tissue damage and help with symptoms of shock.

Some dogs can survive rattlesnakes without treatment, but it’s rare and will depend on many different factors. Rattlesnakes, and the Eastern Diamondback in particular, are the most venomous snakes in the United States, so prognosis without treatment is usually very dire for a dog.

Most vets agree that a dog’s survival rate from a rattlesnake bite will depend on several factors including:

The bottom line is if you don’t seek immediate treatment, your dog is likely to suffer a lot after a rattlesnake bite and could even die. This is particularly true with smaller dogs who won’t be able to cope with the venom as well as a larger dog is able to.

Handy Hint: Treatment costs for a rattlesnake bite will vary wildly. Some owners opt for a preventative vaccine, here’s how much it costs.

As you would imagine, the survival rate chances of a dog after a rattlesnake bite is much improved if the animal receiving prompt medical treatment, and the nature of the bite.

Some dogs will take longer to recover, and this can often be related to the size of the dog, health, and age. The seriousness of the rattlesnake bite is the main factor, with recovery depending on how bad the tissue damage to internal organs was.

You can improve the chances of your dog not being bitten in the first place by appreciating a few facts about how rattlesnakes behave. For example:

Signs of a rattlesnake bite in your dog

You might not even have seen the rattlesnake strike your dog. If you do suspect your dog was bitten, here the most obvious signs:

If your dog does get bitten, here are some tips to help improve the rattlesnake bite dog survival rate of your own pet. It’s key to not try any lifesaving attempts yourself, but to get your dog into the capable hands of a vet as quickly as possible.

I found various studies and reports from vets who explain that the predictions around the recovery and survival rate of a dog after a rattlesnake bite is much more conservative than other snake bites.

You need to be very careful when in areas where rattlesnakes are common. If you do live in an area like this, speak to your vet about getting your dog vaccinated with a rattlesnake vaccine.

Vaccinated dogs will still need treatment, but it’s said to help reduce the chance of pain, long-term injury, and death in canines.

But the main take out to consider is that if you act quickly enough, your dog could survive a rattlesnake bite.

I frequently write down my opinions about dogs and snakes, with a few highlights featured below.