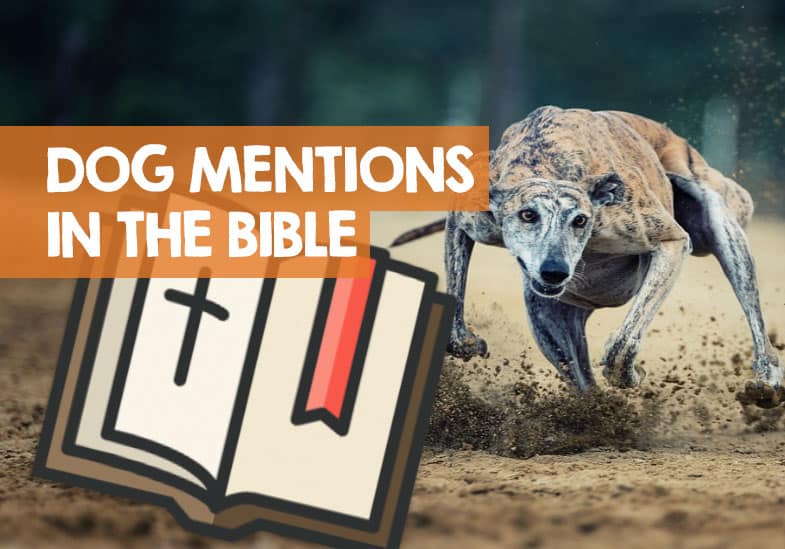 Long before man domesticated any other type of animal, we had dogs living with us. In fact, research suggests that dogs were domesticated around 15,000 years ago. I will explain a little more about that scientific research a little later, but what this does mean is that this date is possibly way before many Christians believe the world was created.

However, I’m not here to get into a theological discussion on belief or religion. My blog isn’t a place for that. What this is a place for though, is facts about dogs. I recently researched into what dogs are mentioned in the Bible, and how many times a dog is referenced.

It was an interesting study, as I don’t believe any other canine blog has ever taken the time to find out about dogs in the Bible. Here’s what I found…

What dogs are mentioned in the Bible?

Whilst dogs are mentioned multiple times in the Bible (more on that in a moment), there is only one breed that is specifically mentioned; and that’s the greyhound in Proverbs 30:29-31.

With the greyhound being the only dog breed that is specifically mentioned in the Bible, you are probably wondering what the context was, and what the passage says. Here’s the direct quote from the King James version.

“There be three things which do well, yea, which are comely in going; a lion, which is strongest among beasts and turneth not away from any; A greyhound; A he-goat also.”

The word “greyhound” is translated from the Hebrew phrase for “girt in the loins”. Does that mean is was an actual greyhound in the Bible (if the literal meaning is to be believed)?

Well, perhaps not… it was probably the closest the translators of the original Hebrew could get to.

Interestingly, there are other versions of the Bible where the greyhound character is instead described as a “strutting rooster” – it stands to reason that the translators for King James probably didn’t want to call him that!

It’s also worth mentioning that the greyhound breed of dog was very popular in the court of King James when this version of the Bible was published. This dog breed was probably high on the list of breed the translators were familiar with.

And was it even a greyhound in King James day anyway?

I read a post on a web forum from a person debating where it mentions greyhounds in the Bible, and he said this:

Where does it mention greyhounds in the Bible?

To confirm and conclude, a greyhound is the only dog mentioned in the Bible by breed (if it’s the King James version you’re reading).

The exact place it mentions greyhounds in the Bible is in Proverbs 30:29-31.

How many times does the Bible mention dogs?

But that doesn’t mean there aren’t other mentions of a dog in the Bible. In fact, there are plenty of doggy references, they just aren’t breed specific.

And how many times does the Bible mention dogs exactly?

Well, according to my own research, the Bible mentions dogs 41 times if you combine the Old and New Testaments together. To be more precise, mentions of a dog in the Bible are as follows:

And below you can see an infographic I created which quotes every phrase in the Bible which mentions the word “dog”. Feel free to use it on your own website, but if you do please do credit DoggySaurus.com with a link!

What was the role of dogs in the Bible?

If we read through the mentions I referenced in infographic above, there are some recurring themes when dogs are mentioned in the Bible.

It’s not clear if dogs were kept as pets during Biblical times, or at least not in the way we would consider pets to be kept. Dogs are often mentioned as working animals, and there is also a suggestion that there were perceived negatively due to running wild in packs.

Handy Hint: Did you know that 29% of dog owners believe their dog can sense evil and see ghosts?

What science says about dogs and domestication

There’s a fantastic article on the New York Times about research into where dogs came from and the history of canine domestication.

“Scientists generally agree that there is good evidence that dogs were domesticated around 15,000 years ago. By 14,000 years ago, people were burying dogs, sometimes along with humans. But some biologists argue, based on DNA evidence and the shape of ancient skulls, that dog domestication occurred well over 30,000 years ago. And as to where the process occurred, researchers studying dog and wolf DNA — most of it modern but some from ancient sources — have argued in recent years that dogs originated in East Asia, Mongolia, Siberia, Europe and Africa.”

Depending on your view on Biblical history, it could be that dogs were domesticated in Biblical times, or maybe they weren’t.

I will leave that one up to you.

What other animals are mentioned in the Bible?

Whilst there are plenty of dogs in the Bible, including the now famous mention of a greyhound, there are no cats. However, there are mentions of random animals that you might not have expected including:

To name but a few… you can see a full list of animals mentioned in the Bible in this Wikipedia list.

After reading about the greyhound in the Bible and 41 mentions of dogs, I decided to find which mention most resonated with me. I think it’s the two below.

Mark 7:27: And he said to her, “Let the children be fed first, for it is not right to take the children’s bread and throw it to the dogs.”

Mark 7:28: But she answered him, “Yes, Lord; yet even the dogs under the table eat the children’s crumbs.”

Our dog Claude sits patiently by my son’s chair when we eat, as he knows that this is where all the crumbs and mess will fall to quickly gobble up!

It seems like even a dog in the Bible behaved this way and not much has changed since!

If the greyhound being the only dog breed specifically mentioned in the Bible has whetted your appetite for learning more, you might like this history of the breed on the UK Greyhound Club website.