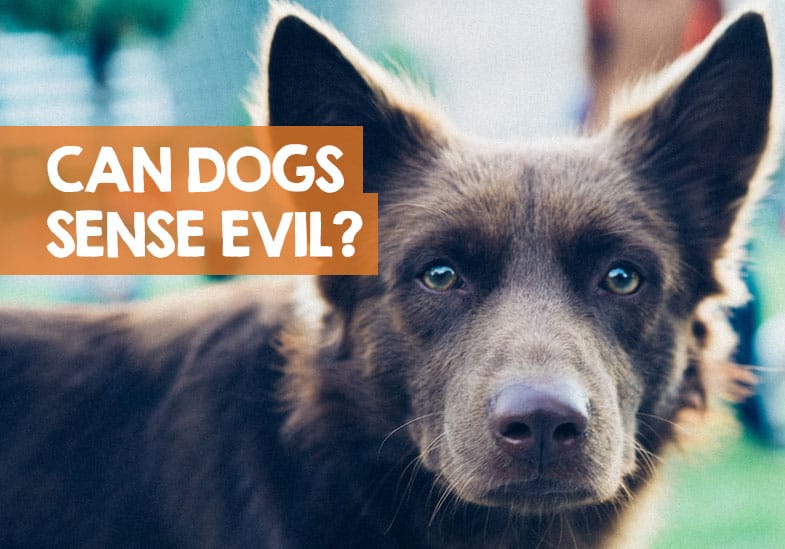 If you’ve ever noticed your dog reacting negatively to a person, you could assume that the person is not to be trusted. After all, our dogs have senses far more powerful than us. But does that include the ability for dogs to be able to sense evil presences?

Of course, this all depends on your personal beliefs of what evil means, and whether it’s possible for dogs to sense evil in a person. Here’s what I think.

I believe that dogs can sense evil, not just in a person, but also the presence of evil depending on how you define that. Dogs have heightened senses including hearing and smell letting them feel and sense subtle clues in body language and bad behavior that we can’t.

Not everyone will agree with me on this, but if you read on, I will explain in more detail why I think dogs do sense evil and sense bad intentions. I will also tell you about a survey that explained why many pet owners believe dogs can ward off evil spirits.

Can dogs sense evil in a person?

If you pay as much attention to your dogs as they do to you, you will soon realise that beyond their amazing sense of sight, smell, and hearing, they have a sixth sense that can warn us against danger in many forms.

In the wild, dogs and their ancestors, the wolves, live by their wits. Although most domestic pets live in relatively stress-free surroundings, they appear not to have lost the ability to ‘trust their gut’ instinct, the way many of us humans in the comfort zone have.

But can dogs truly sense evil in a person, or sense evil eye? It all depends on what your definition of evil is.

Evil people usually act with harmful intent towards fellow human beings, animals, and the world in general. Physical malevolence is exhibited by aggression, intimidation, and violence.

But can dogs sense evil in a person, whether an intent or presence?

Yes, they possibly can, because people might emit spiritual vibes and come across as creepy or menacing. This maliciousness manifests itself in life and persists after death.Dogs can potentially sense this as they are adept at detecting negative energy. More on that in a moment though…

Not all that is detrimental is confined to human behaviour, however. Disease and disaster are also life-threatening. Dogs can detect all the above, in varying degrees, and these skills can be honed through training.

For example, it’s possible for dogs to sense earthquakes before they happen. An earthquake can have devastating consequences, some would say, possibly evil depending on your point of view.

How dogs can sense

Dogs do not understand evil in the moral sense but are hypersensitive to threats and danger. They operate by instinct and are often able to discern malintent long before humans can.

Most humans rely on their emotions and intellect to judge people and can be easily manipulated.

The canine sense of smell is exponentially more powerful than the average human sense of smell. They can track a scent for miles, long after it was laid. This phenomenal skill has been harnessed by search and rescue and law enforcement organisations.

Dogs can be trained to sniff out bombs, drugs, and various other forms of contraband. They can also be trained to discern between the living and the dead and even sense when their owner is in pain.

Dogs are used in collapsed buildings and avalanches to detect the body heat of people trapped under snow or rubble, way below the surface. They can even smell underwater.

The medical profession has also realised the value of the powerful canine sense of smell. Service dogs have been responsible for saving countless lives by sniffing out cancer and warning diabetic patients, in their care, of impending sugar lows. They are also able to recognise the changes in pupil sizes that precede epileptic fits.

Dogs are also very sensitive to vibrations and can hear a far greater range of sound than humans can. Many of us have been alerted to an impending thunderstorm, by a nervous dog, long before it arrives. There is ample anecdotal evidence that dogs and many other animals acted strangely before major disasters such as the 2004 earthquake and subsequent tsunami that was felt on three continents.

There are claims that none of the animals that were free to leave were caught up in the floods, even those that were hundreds of miles from the epicentre of the earthquake. Even snakes leave their holes when danger is imminent and there is truth in the statement that ‘rats desert a sinking ship’.

Have you ever behaved in a certain way and looked into your dog’s eyes thinking that they knew you were going to do that? Our dogs become attuned to our moods and emotions and seem to have a sixth sense that can predict them. Even before we know we are sad, they comfort us.

When our happy hormones, such as dopamine, serotonin and oxytocin levels are up, they can sense these and rejoice with us. When I begin to raise my voice in anger or cry, one look at my dogs’ bewildered faces is enough to make me change my tone.

Someone who has evil intent will have heightened levels of adrenalin coursing through their veins which dogs can also detect. Dogs will become alert to their unpredictable movements or erratic behavior, and react to any hint of aggression, stress, or fear.

How do dogs react to evil people?

There are several accounts of dogs that are normally gentle, quiet, and friendly, suddenly launching into full, unprovoked attack mode when a specific person comes near them. Often the harder the stranger tries to appease the dog, the more frenzied the attack becomes.

Dogs can see through any pretence. Dogs can sense evil presence… and invariably, evidence later comes to light that the person involved has a record of committing heinous crimes.

Dogs will bristle, snarl, growl and even attempt to bite. Owners have been baffled and sometimes embarrassed by a normally compliant pet, refusing to calm down or obey.

Depending on the nature and the nurturing of the dog, a more timid dog may freeze or cower, and put its tail between its legs. Sadly, there are far too many reports of dogs seemingly staying loyal to abusive owners.

Most dogs that are free to express themselves can determine whether someone is creating negative or positive energy. They are sensitive to voice tone and are adept at reading human facial expressions and body language.

Dogs are man’s best friend, and it is natural for people to be drawn to them. If someone ignores a dog, is dismissive of them or speaks harshly, this should raise alarm bells.

One of the predictors of psychopathic behaviour is childhood cruelty to animals. Dogs can sense this evil malevolence and will not trust such a person. They also respond to the individual’s lack of empathy and the inability to fake it and will avoid them.

Studies into dogs being able to sense evil

A Japanese study set out to determine whether a dog would trust someone who had been dishonest or lied to them. They had dogs do tricks for treats.

Similarly, the study tested whether dogs would take treats from someone who had exhibited aggressive behaviour towards their owners – what you might call an “evil” person. Once again, the dogs accepted treats from benign participants but not from those who were belligerent.

This protective instinct extends to the whole pack. Dogs will protect any member of their family as well as other pets in the household. Through the centuries many working breeds have gained stellar reputations as excellent guardians of livestock.

Did You Know? Some dogs appear to be able to sense when their female owner is menstruating.

Dogs and the paranormal

There is documented evidence of dogs being very sensitive to the spirit of their owners. Relatives have reported that dogs have died immediately prior to their owner’s passing or within hours afterwards, as if they wish to continue their journey together into the afterlife.

Dogs have also been known to react to unknown entities in the spiritual realm. People have recorded their dogs’ adverse reactions to restless spirits, and occultic paraphernalia and practices.

On the flip side, there are encouraging signs that dogs can rehabilitate the most hardened of criminals. Several prisons conduct dog training programs where dogs, sometimes themselves rescued from death in kill shelters, are paired up with long term inmates.

The dogs live with the prisoners who are responsible for feeding and grooming them and training them to be eligible for adoption. Authorities have found that the prisoners become less frustrated and aggressive, and that the rates of recidivism among inmates on the program are greatly reduced.

Participants in the program have come to experience the unconditional love that a dog gives. They learn to trust again, gain some purpose in their lives, and acquire a new skill that they can put to good use once they are released.

Can dogs ward off evil spirits?

I am an open-mind person, as you can probably tell from this article. I don’t know for certain whether evil spirits exist or not, but I can tell you what is said about dogs being able to ward off evil spirits.

In 2015, the Blue Cross animal charity conducted a survey of 2,000 pet owners. You might (or might not) be surprised to hear that 30% of those canvassed believed their pet was able to protect them against evil spirits and ghostly goings-on.

The survey results explained how some dog owners said their pet would alert them in the presence of an evil spirit or ghost. This would manifest itself by the dog staring at a space reacting to what appeared to be nothing there.

This could include barking for no apparent reason, hackles rising (hair stands up), or backing away from a space. The owners assumed this was the dog sensing and then warding off an evil spirit.

Well, it’s said that dogs are very good judges of character and know instinctively whom they can trust, even before the person says a word or acts in any way.

Whether you believe that dogs can sense evil or not, you can’t deny that they certainly have instinctive senses that owners should pay attention to.