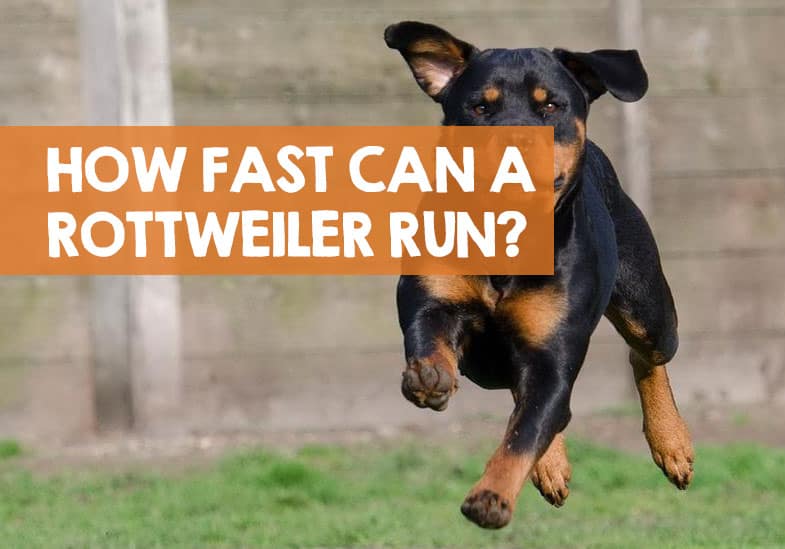 You’ve probably seen how fast your Rottweiler puppy runs with his newly found friends at the dog park. Or perhaps you’ve seen your fully grown Rottweiler bolt after a squirrel at what appears to be almost cheetah-like top speed.

But just how fast are Rottweilers, and what is their average running speeds, as well as their top speeds you can expect to see. Well, it’s not that clear-cut, so here’s my guide to Rottweiler speeds, starting off with the short answer to how a Rottweiler dog can run.

Rottweilers are not fast dogs when you compare them to some other breeds. But you can train a Rottweiler to run faster with endurance training. It’s also worth noting that Rottweilers only run short distances.

Below I also explain why Rottweilers aren’t great long-distance runners. I’ll also discuss the dangers of taking your Rottweiler for long runs and a few things to consider before making them your jogging partner.

If you’re interested, I’ve also included a league table of dog breed top speeds so you can compare how fast a Rottweiler can run against some of the top canine sprinters in the world.

Rottweilers give off Usain Bolt vibes going by their athletic appearance. They seem to have the “running champ starter-pack” due to their strong muscles, an energetic attitude, and a high level of enthusiasm to run.

Based purely on how they look, you might assume that the Rottweiler max speed is up there with some of the quickest dog breeds on the planet. It’s not the case though. Rottweilers are slow compared to dogs like Dalmatians, German Shepherds, Great Danes, and Greyhounds.

The reason why Rottweilers do not run fast and have top speeds comparable to other breeds is due to their lineage. Rottweilers trace their origin back to Rome, where ancient Roman soldiers relied on them to pull army carts.

This fact may give the illusion that Rottweilers have the endurance to run extremely high speeds. But do they? Especially as a mere household pet?

At its peak, a healthy Rottweiler top speed when max running could be between 18 and 25 mph. And in truth, this isn’t that slow, considering the running speed of an average dog is approximately 15 to 20 mph… but it is slower than I think most people would expect.

On the contrary, Rottweilers are far from being crowned running champions if the speed of Sighthound breeds like the greyhound is anything to go by. Sighthounds can run for a whopping 45 mph! And for long distances too.

In human terms, Rottweilers are more of speedy sprinters, not long-distance marathon runners.

What this means is, the Rottweiler running speed is quicker over a very short distance. But they can’t do long distances at full speed without getting tired quickly or risking injury.

Light jogs are the safest and most enjoyable for Rottweilers.

A Rottweiler’s physical make-up limits their ability to run faster and for long distances. Let’s take a close look at these inconveniencing physical traits.

Why Rottweilers cannot go on long runs like other dogs

If you were to ask most owners how long can a Rottweiler jog, you will probably get answers of around 2 miles. Any long run will be hard for them, and here’s why.

Normally, faster-running dogs like Dobermans and German Shepherds have long, lean legs that can bear their body weight when covering long distances.

Plus, their long leg bones have more cartilage, This is a tissue that prevents the joints in the dog’s legs from rubbing against each other.

Now, Rottweilers have thick, short-sized legs (in comparison to the faster-running dogs). This undermines their running ability in two ways.

One, their bulky size will strain these short legs if they run for long distances. And two, their legs don’t have much cartilage to deal with long runs.

The harder a Rottweiler runs, the more their joints press against each other, causing pain. Plus, frequent long runs will, over time, degrade these cartilages.

Your canine pal’s joints risk swelling and getting severely injured. And when this happens, they might be forced to say goodbye to any type of running — including short sprints.

So, sticks and stones can’t break a Rottweiler’s bones, but long runs can,

This is why Rottweilers don’t make good running partners for joggers.

If there’s one thing that makes Rottweilers stand out, it’s their muscular body. This gives them incredible strength. But it’s also why people think the top speed of a Rottweiler will be up there with the best runners – it’s deceiving.

Rottweilers have lots of muscle that go from the top of their big heads all the way to the tip of their tails.

But this muscular look can only give them victory at a canine weight-lifting contest, not in a long-distance running competition.

According to the American Kennel Club, an adult (male) Rottweiler can weigh as much as 135 pounds! This heavy size will only tire them out quickly and means Rottweilers cannot run fast.

When you decide to take your Rottweiler for a long run, just know you’re over-exercising them. This will eventually lead to joint problems.

So, besides light jogging, a Rottweiler is better off doing other fun exercises for the sake of their joint health. For instance, agility exercises, swimming, walking, and tug of war.

Excellent runners in the dog world have longer noses. This allows them to take in enough air while running long distances.

Remember, running is an intense form of dog exercise. Your four-legged companion’s body uses up oxygen while running, so they need to replace the lost oxygen.

Because of their mesocephalic head shape (which gives them the somewhat squished face), Rottweilers aren’t fortunate to have long snouts. Their noses are quite short compared to the long-distance dog runners.

If a Rottweiler runs for too long, they’ll be short of breath soon enough. Their not-so-elongated noses will cause airway issues.

They’re likely to pass out if there isn’t enough air passing through their nose and circulating in the body as they run.

Long runs with a Rottweiler can cause overheating issues

When Rottweilers run fast more than they should during a hot day, they risk overheating. Their thick, black double coat will absorb and retain a lot of heat as they run.

For this reason, they may suffer a life-threatening heat stroke when covering long distances.

Sometimes, your Rottweiler may not be down for a run. But they’ll give in because they want to please you.

What might seem like a short, simple run to you may be tough on your canine friend. To know whether the running session is (or was) strenuous for your Rottweiler, you need to be on the look-out for some signs of discomfort, including:

Consider halting the running sessions or stick to light jogging when you notice these signs. You should also see the vet if signs like limping persist.

It’s also not advisable to take your Rottweiler for fast runs if they are still a puppy. Their bones are still developing and running can interfere with their joint health.

Jogging with your Rottweiler

At this point, you now know why long-distance running for Rottweilers is a no-no.

When you make your lovely Rottweiler your jogging partner, you should keep a few things in mind if you’d want to have more amazing jogging sessions together:

Allowing your canine pal to jog on the pavement with you is a bad idea.

Your jogging shoes protect you from the hard surface, but your Rottweiler’s paws will face the wrath of the unforgiving hard ground. The best thing you can do is make sure your furry friend jogs on soft ground — for example, grass, the beach, or a dirt trail.

Otherwise, they’ll develop paw abrasions if they regularly jog on pavements. Plus, their joint health will worsen over time. Let them walk on pavement, but not run.

2. Consider bone supplements for your Rottweiler

Joint supplements will strengthen your Rottweilers joints, lowering their risk of joint-related problems due to constant running. However, only give your fury friend supplements prescribed by your vet. Avoid getting over-the-counter ones if you haven’t talked to a professional first.

Give your Rottweiler a small break during jogging — a few minutes to sniff around, catch their breath, and drink water before proceeding.

Yes, you need to keep your jogging buddy hydrated. So be sure to carry bottled water when you both step out for a jogging session.

I also wanted to compare how fast Rottweilers are to the dog breeds that are said to be the quickest runners on the canine planet. Here’s the top fastest dog breeds, compared to a Rottweiler’s top speed which I am setting at 25 mph.

Rottweilers are not slow compared to most dogs, but they are not in the top bracket of quickest dogs either. They are surprisingly slow though, compared to similar sized dogs.

How strong is Rottweiler?

Research shows a Rottweiler is strong enough to pull nearly 1000 pounds of weight.

How long can a Rottweiler jog?

A Rottweiler can jog for around 15 minutes before feeling fatigued.

Now you know how Rottweilers can run, I’d recommend checking out some more Rottie guides on the links below.