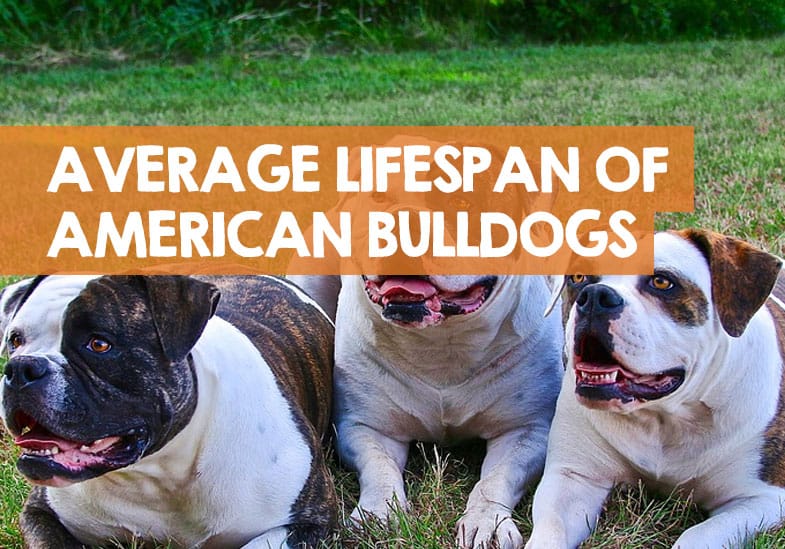 Whether you already own one, or are thinking about getting one, an important question is how many years American Bulldogs live. Now, whilst it can never be accurately predicted, knowing their average lifespan can help you plan and predict what your life might be like in the future once you own a dog.

In this guide I will explain what the life expectancy of an American Bulldog is, what factors dictate the living to old age, and how you can help them life a longer and healthier life. But first, here’s how long American Bulldogs live on average.

American Bulldog life expectancy on average means they could live between 10 and 16 years of age. This means the average lifespan of an American Bulldog is 13 years old. However, as with any dog breed, heath issues, luck, and genetics can reduce or extend their lifespan.

In terms of good news, of all the bulldog breeds, the American Bulldog is considered healthiest, with the longest life span in comparison. Below I will explain the American Bulldog’s lifespan in more detail with tips on how you can extend it… plus the potential life expectancy differences between a male and female in this breed.

American Bulldogs’ life expectancy (and how to prolong it)

Anyone who owns an American Bulldog appreciates how well this gentle-spirited breed fits into the family setting. They take the guard role seriously and show love to their human family without holding back.

When an American Bulldog finally becomes part of your family, their life expectancy might be the last thing on your mind. You’d want to live in the moment and not think that someday you’ll say goodbye to your cherished canine friend.

That’s understandable. We all wish our four-legged could keep us company for several years. But knowing how long your American Bulldog lives and you will have together is a good thing, even though it doesn’t sound like it.

It will make you want to do everything you can to ensure they experience the best years of their life and even increase their chances of living past the estimated lifespan of an American Bulldog.

According to various online sources, the American Bulldog’s expectancy ranges from 10 to 16 years. What’s also interesting is that American Bulldogs are the longest-living and healthiest bulldog breeds.

So, it’s possible for an American Bulldog to live beyond 16 years.

One main factor that gives the American Bulldog such a long life span is how physically active this breed is. And their athletic appearance says it all.

American Bulldogs are known to be highly energetic and are always ready to participate in high-energy exercises. As they maintain a healthy body weight through regular physical activity, their risk of premature death lowers.

Another key factor in the life expectancy of American Bulldogs are predisposed to only a few genetic health issues. Compare this to French Bulldogs who are prone to lots of health issues and will live a shorter life.

This explains why they are generally considered a healthy breed. While they suffer from various health problems, most of these conditions are avoidable and manageable and help American Bulldogs live longer.

Similar to other dog breeds, illness can decrease an American Bulldog’s lifespan. This breed is prone to the following medical conditions during its lifetime:

Without timely diagnosis and eye surgery, these eye diseases can significantly lower an American Bulldog’s quality of life (check if your dog is going blind).

Like every American Bulldog parent, you’d want the best for your four-legged best friend. And with your help, they can live a longer, happier life free from agonizing health problems.

Here are a few ways to make a positive difference in your American Bulldog’s life expectancy:

While American Bulldogs get afflicted by different health problems, modern medicine can effectively prevent and manage most of these conditions.

When you make it the norm to take your America Bulldog to the vet regularly, you’ll save them from avoidable medical problems.

Your vet will be able to identify any potentially deadly health issue when it’s still at the treatable stage and get your dog started on early treatment.

That’s why you shouldn’t hesitate to bring up any concerns you might have about your canine pal’s health – no matter how minor the symptom may seem to you.

Plus, seeing the vet often is a good step to take if you wouldn’t want your dog to miss any vital vaccinations that keep infections at bay. Frequent checkups will greatly improve your American Bulldog’s well-being as years go by.

How long your American Bulldog lives can depend on how much excess body weight they carry. If you don’t keep this in check, obesity and other weight-related health issues will catch up with them sooner than you think.

A healthy body weight will also increase your dog’s chances of remaining physically active for a long while.

That said, you must carefully manage their calorie intake by limiting how much human food scraps you feed them. Even better, do away with the food scraps and don’t let them scrounge from the counter tops.

Another thing. Be mindful of their feeding method and the type of treats you reward them. Calorie-packed treats and free-feeding will only lead your dog down the obesity path.

Ensure your American Bulldog gets the right amount of nutrients from their usual diet. Quality dog food equals quality dog life. Your canine friend is what they eat.

A nutritious, well-balanced daily diet is what they need to strengthen their immunity, fight off infections and stay healthy for a long time. You can always speak to your vet for the best dietary guidance.

Handy Hint: Whilst it might be tempting to share a bit of your McDonalds with a dog, the calories and potential health impact is frightening.

4. The power of exercising (as obvious as it might sound)

When it comes to dog life expectancy, physical activity is as important as proper food. American Bulldogs are naturally high-energy dogs. You should ensure that you meet your canine friend’s exercise needs to help them stay in shape.

Regular (but moderate) physical activity is important in strengthening your American Bulldog’s joints and body muscles. It also boosts their heart health and protects them from obesity.

Not to mention, exercise sessions allow your American Bulldog to bond more with you. That’s good for their psychological well-being.

Keeping your American Bulldog’s oral health in check can do wonders to their lifespan.

Get your furry friend plenty of rubber toys to chew on as part of their daily routine. This will strengthen their jaw muscles and improve their gum health over time.

Also, ask your vet about the ideal way to brush their teeth and the appropriate dog-friendly toothpaste to use.

Always inspect your furry friend’s mouth at least once a week to spot any discoloration or bleeding around their gum lining, and extremely unpleasant mouth odor. You may also notice chipped or loose teeth before things get worse.

You should also schedule regular dental appointments so your American Bulldog can undergo a thorough dental check-up and professional teeth cleaning. And finally, avoid sugary treats for your canine pal.

What is the lifespan of a male American Bulldog?

The American Bulldog lifespan of a male is 10 to 16 years of age. This means you can expect their average age to reach 13 years old.

Female American Bulldogs have the same life expectancy as males, so you can expect a female to live between 10 and 16 years.

However, research has found that whilst there is no difference in life expectancy when it comes to gender, whether the dog is spayed or neutered can.

In a 2019 study published by Steven Austad and his associate Jessica Hoffman, “Do Female Dogs Age Differently Than Male Dogs?” they found that spayed and neutered dogs live longer than pets who had not had the procedures.

How long do American Bulldogs live in human years?

However, before you go and congratulate your American Bulldog on living such a long life, consider this…

Dogs age much faster than humans. They have a different ‘epigenetic clock’ that causes their cells to age at a different rate. Genome researchers have devised several tables and charts to help dog owners to keep track of dog years, relative to human years.

It is often said that there is a standard ratio of seven dog years to one human year, but it has emerged that it is more complicated than that. The rate at which dogs age depends on their size and, oddly, their age.

They tend to ‘age’ rapidly, progressing from juvenile to adolescent, and on to maturity within two of our years. Thereafter their ageing curve flattens, and they ease on graciously into old age at the rate of four years per human year.

There can be some subtle differences, for example, a pocket American Bulldog might live to 10 to 13 years of age. Here’s a quick comparison list.

Is 10 old for an American Bulldog?

I would not say that 10 is old for an American Bulldog, as it’s not towards the oldest range of their average lifespan. Some can live for up to 5 years longer than this if they are lucky, fit, and healthy.

Is 11 old for an American Bulldog?

11 is considered to be on the lower side of old for an American Bulldog, and some might say this is 77 in human years, which according our context of time and aging would be considered old.

Do American Bulldogs have a lot of health problems?

They can do, but not as many as other bulldog breeds, such as English Bulldogs. As mentioned earlier, American Bulldogs are at risk of health problems such as dental issues, kidney stones, hypothyroidism, eye abnormalities, and hip dysplasia.

But most of these diseases are treatable.

Renowned for its protective instincts and strikingly confident look, the American bulldog is among the sweetest dogs out there.

How long you get to spend with this adorable breed will depend on many factors. Things that influence an American Bulldog’s lifespan include health, diet, and genetics.

But perhaps, with a little luck and care, yours will live a long life to 15 years old… or possibly even more!