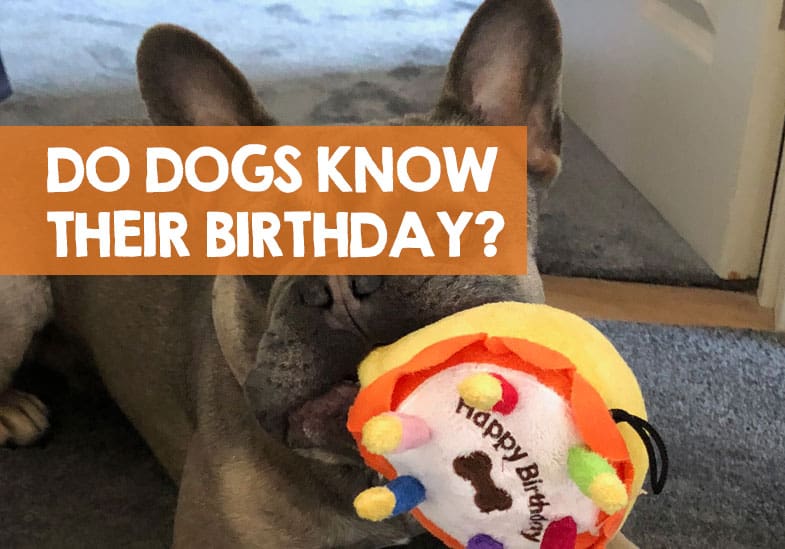 There is a growing trend, especially among those who are influenced by social media, to celebrate and generate photo opportunities. Milestones of the modern era that are most often celebrated, include their dog’s birthdays.

Any why not? After all, your pet is a member of your family, so it’s perfectly okay to celebrate your dog’s birthday and make a big deal out of it. However, can dogs tell when it’s their birthday?

Dogs do not know when it’s their birthday as they have no concept of what is a human tradition. However, dogs will understand that something special is happening when you make a fuss of them on their birthday and will enjoy all the trappings that come with a birthday celebration.

Think of it this way; whereas time is a real concept; days, weeks, and annual events, such as birthdays, are human constructs. There’s no way that dogs know their own birthday or understand what we celebrate for them annually.

Dogs live in the moment, focused on whatever ensures their survival and comfort… and fun. So, whilst it will appear that your dog will love you celebrating their birthday, they will have no idea of why you are treating them this way.

Dogs are social animals who will respond with excitement to whatever the pack is doing. They will go along with a great dog birthday party include pup cakes and pupaccinos because they enjoy them. It will also please them to see their owners having fun and being pleased.

To understand how dogs don’t know it’s their birthday, we need to look closer at how dogs view and understand time.

Dogs are creatures of habit and daily routine. For example, they seem to know when it is getting close to dinner time or when their owner is due home.

They may get used to a weekly routine, such as their owner going to work on weekdays, shopping on Saturday and church on Sunday, but that is the extent of their scheduling skills.

Dogs have semantic memory and limited episodic memory. Semantic memory is the general knowledge and habitual behaviour that we accumulate throughout our lives.

Dogs are largely predictable and learn by repetition. Most are trainable. For instance, they will know where their food is normally served, when their bedtime routine starts and how to react when their lead is taken off the hook.

Studies have shown that dogs may have specific memories of events or experiences, that have cause them emotional or physiological responses, such as a visit to the vet.

Their short term memory tends to fade faster than that of most humans, so they are unlikely to reminisce, or remember with fondness, their birthday celebrations from last year. There are no signs that they anticipate similar events in the future.

How often does a dog have a birthday?

Now we know dogs don’t know when it’s their birthday, the question next comes to how often we should celebrate them on their behald. After all, dogs are said to have 7 years to one human year.

Don’t worry, I don’t expect anyone should be celebrating their dog’s birthday 7 times a year. Once is enough. It’s an interesting concept though…

The concept of dog years

But this also leads on to the concept of dog years in relation to birthday.

Dogs age much faster than humans. They have a different ‘epigenetic clock’ that causes their cells to age at a different rate. Genome researchers have devised several tables and charts to help dog owners to keep track of dog years, relative to human years.

It was commonly thought that there was a standard ratio of seven dog years to one human year, but it has emerged that it is more complicated than that. The rate at which dogs age depends on their size and, oddly, their age.

They tend to ‘age’ rapidly, progressing from juvenile to adolescent, and on to maturity within two of our years. Thereafter their ageing curve flattens, and they ease on graciously into old age at the rate of four years per human year.

If you were to celebrate your dog’s birthday in tune with its physical age, you would need to throw two parties a month for the first two years of their lives.

Handy Hint: If you own a rescue dog there are some ways in which you can estimate how old they are as puppies.

Understanding human birthdays and how that relates to your dog

Some nationalities, cultures and religions do not celebrate birthdays at all. However, in those societies that do embrace birthdays, the practice often starts when the person is very young.

In our small town, one enthusiastic set of parents hired the local football field, a popcorn machine, hot dog stand and several party activities for their first child’s first birthday.

Psychologists have studied children to determine from what age they understand the concept of birthday parties. They concluded that the average age is between three and four. By the age of five the child becomes involved in the planning and the build-up often yields more satisfaction than the actual event.

How does this relate to dogs knowing their own birthdays? Stick with me.

The first birthday party usually celebrates the anniversary of one year of parenting, otherwise known as survival. It has less to do with the child in question, who is often oblivious to or annoyed at proceedings.

Two-year-old birthday parties are risky, as this is the beginning of the child’s quest for independence. The event is likely to end in a tantrum, thrown by the birthday toddler, one of the guests, or both.

It is advised that any gifts received be opened after the party. Pint-sized guests will not yet have grasped the concept of transfer on ownership and may be put out by having to part with the gift that they brought to the party.

At maturity, dogs attain a mental age of approximately two and a half human years so will never really grasp the notion of birthdays. At most, they will mirror the excitement and general mood of their owners.

How do birthdays work for dogs?

Forthglade Foods studied the developing trend of celebrating dog birthdays in the United Kingdom, and made the following findings on how typical birthdays work for dogs.

How do you let your dog know it’s their birthday?

Whilst your dog will not know it’s their birthday, you can try and let them know at least with plenty of excitement, pampering, and treats.

You can buy cakes, cards, and all sorts now for dog birthdays.

Some people will celebrate any event, from the rising of the full moon to the success of a new recipe. They are egged on by commercial party planners who are promoting and peddling party merchandise.

I also found that certain breed owners are much more likely to celebrate their dogs’ birthdays than others.

For many people, birthdays are like other milestones in life. They might as readily celebrate when their dog has successfully been potty trained or graduated from obedience classes.

Yet others, who are perhaps not keen to acknowledge the passing of their own years, still feel the urge for festivities. They will therefore focus their attention on their dogs and grandchildren, treating them with equal status as family members.

Some people develop traditions. An extremely organised, elderly friend of the family celebrated all her dogs’ birthdays on one neutral day, each year. She also gathered all her grandchildren together at Easter and issued them all with new pyjamas.

If you are inviting other canine friends over, choose a neutral venue. This is a precaution against any territorial disputes.

Also, invite only dogs that have been socialised. It goes without saying, that the same rule applies to their owners.

Ensure that all eats and treats are healthy. You do not want your dog or their canine guests to be ill or ‘hung over’ for days after the event.

Do not leave any props at pup level. Some dogs may be tempted to run off with them, while others may lift their leg and anoint them.

Have someone on poop patrol to clean up afterwards if the venue is in a public place.

Have fun by choosing theme for your party. Chihuahuas, being of Mexican lineage, traditionally dress up in sombreros and ponchos. You might want to hire a snow machine for your huskies or malamutes.

Capture the moment with a photo shoot and have a guest book available for the guests’ paw prints. Display said items on Instagram afterwards.

Organise party favours or doggy bags for guests to take away from the gathering. These could be personalised dog bowls filled with treats, a new tennis ball, or whatever your budget allows.

I would be cautious of balloons though. Some dogs are scared of balloons, but most dogs will attack and burst them. They can be dangerous when swallowed.

If your dog is still in training, try not to break too many rules, as they may cause a setback in your program.

Do not forget to feed the human companions.

Dogs don’t know it’s their birthday, but don’t let that make you stop a celebration. Your dogs will love celebrating their birthday with you, they just won’t have a clue why it’s happening – and that’s ok.