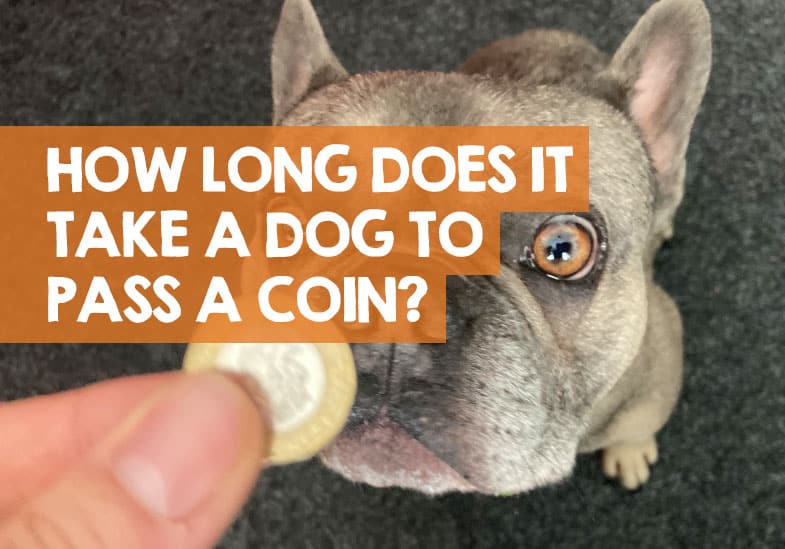 I’ve mentioned before about how my own dog nearly managed to swallow a coin. At the time I was in pure panic mode but was just able to hook it out of his mouth before he swallowed it down. After this scary event, I mentioned the episode to a vet friend, who explained how dangerous this could have been, but also how the coin could have passed through my dog in his poop.

And here’s the thing; whether the coin will pass through your dog’s system will depend on the size of the coin, your dog, and individual circumstances. So, please do call your vet for immediate advice as if your dog has swallowed one. Not only can it lead to a blockage, but your dog could also get zinc poisoning from the coin depending on the metallic components.

However, if it is smaller coin, it might possibly pass through your dog. And if it does, how quickly will this happen?

But your dog might not be able to poop out the coin. Even if they do poop it out, there’s a chance of zinc toxicity too,  so I can’t stress this enough; call your vet to get a professional opinion and diagnosis.

Can a dog poop out a coin?

Before I get into more detail about the mechanics of how long it takes for a dog to pass a coin, the first question to answer in more depth, is whether it’s even possible for it to be pooped out.

Some coins are bigger than others, they come in different shapes and metallic materials, and some dogs are small. Thankfully most coins are smooth, which can help them to pass through a dog’s digestive system… some might get stuck though.

There is also have another risk which is zinc poisoning. That can make the situation more complicated.

So, your dog can poop out a coin in theory, but whether it does will depend on a number of factors including:

With many dogs the stars will align and you should find that your dog poops out the coin due to the way it is positioned internally.

You might not know if the position is good unless your dog has X-ray or ultrasound at the vets to check the coin hasn’t become stuck.

How can a coin get stuck?

Your dog has a digestive tract which starts at the mouth, goes down the oesophagus, through the belly and small intestine, into the colon, and eventually the rectum. This is the point a small coin could get pooped out… if it gets that far.

Whilst the majority of very small foreign objects will pass through a dog by the 24-hour point, some large or odd-shaped objects can get stuck inside your dog for longer.

For example, if the coin can’t pass into your dog’s intestine, it can possibly stay in the stomach for months. When in the stomach, a lodged foreign object can result in intermittent chronic vomiting.

But many times, a coin will pass through a dog and get pooped out. If the coin can reach the colon, it should pass through completely. If it’s too big, it will often get trapped in the stomach or small intestine.

Should you be worried about zinc poisoning?

Back in 1982, the United States government began minting coins using zinc with a slim copper coating, because it was far cheaper than copper to produce. Unfortunately for dogs, this puts their health at risk. When swallowed, your dog’s stomach acid can dissolve this thin layer of copper, meaning they are then exposed to zinc.

“While some coins can be safely ingested and passed out in the stool a few days later, some types of coins contain large amounts of zinc, resulting in zinc poisoning. When the zinc-containing coin enters the acid environment of the stomach, the zinc breaks down, causing stomach upset and zinc absorption into the blood stream.”

Coins that contain zinc include the penny (or cent) in the United States. In the UK, one penny, two penny, one pound, and two pound coins contain the zinc element.

Dogs with zinc poisoning from a coin that has not passed and been pooped will exhibit some very serious symptoms (and possible death) including:

Just as the coin might pass through your dog, there’s also a chance that it won’t be pooped out; you should always talk with a vet first.

A vet will be able to perform an x-ray on your dog to locate the position and size of the coin. If you can tell the vet what type of coin it was too, that will help as it can indicate whether zinc toxicosis is a possibility.

For example, most pennies contain zinc so might need to be surgically removed before they reach your dog’s gastrointestinal tract.

There are some stark warning signs that things aren’t right, which indicate the coin won’t be passing through such as:

If your dog has swallowed a coin, please call a vet immediately. You should never take any chances with things like this as there’s no guarantee it will be pooped out.

Whilst many dogs will poop the coin out and it will be passed inside of one day, not all of them will be that lucky.