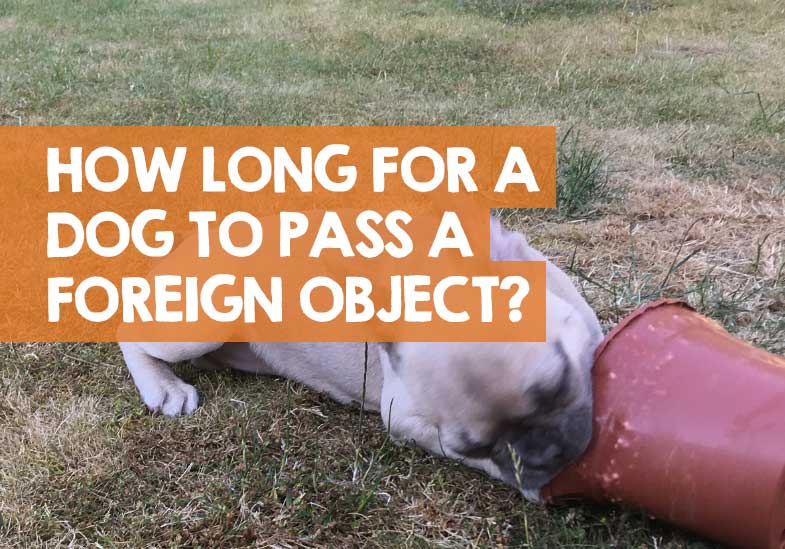 I’ve written before about how my own dog managed to eat various items such as bits of Lego, plastic squeakers and such like. Every time it has happened, it’s induced a lot of panic in our household, because we’re quite rightly worried about him swallowing a foreign object and it getting stuck and hurting him. We’ve been lucky though, as each time the foreign object has passed and we’ve found it in his poop.

But it won’t always be this way and can depend on the size and shape of the foreign object and individual circumstances. So, please do call your vet for immediate advice as I outline in this post if your dog has swallowed one.

However, if it is small foreign object, it could possibly pass through your dog in quick time, but just how fast will this happen?

But your dog might not be able to poop out the foreign object, particularly if you have a small dog, or the foreign object was big or an odd shape. I can’t stress this enough; call your vet to get a professional opinion and diagnosis.

Can a dog poop out a foreign object?

Before I get into more detail about the mechanics of how long it takes for a dog to pass a foreign object, the first question to answer in more depth, is whether it’s even possible for it to be pooped out.

Some foreign objects are bigger than others, and some dogs are small. When you look at the shape and design of the foreign object, you need to consider whether it has sharp sides that can snag and tear your dog internally or whether it will be too large to pass through the colon. Whilst it might be swallowed easily, getting through your dog completely is another story.

Very small and smooth foreign objects can pass through a dog’s digestive system easily in many cases.

This is good news of course, but there will be other foreign objects which have design features that can make the situation more complicated.

So, your dog can poop out a foreign object in theory, but whether it does will depend on a number of factors including:

With my own dog, the stars aligned, and my vet was quite happy that my dog was able to poop out the foreign object due to the way it was positioned internally.

You might not know if the position is good unless your dog has X-ray or ultrasound at the vets to check the foreign object hasn’t become stuck.

The bottom line is this:

How can I get my dog to pass a foreign object?

When vomiting isn’t an option and the vet does not think the foreign object will pass in your dog’s poop, surgery is performed if the item reaches the intestines.

How can a foreign object get stuck?

Your dog has a digestive tract which starts at the mouth, goes down the oesophagus, through the belly and small intestine, into the colon, and eventually the rectum. This is the point a foreign object could get pooped out… if it gets that far.

Just as the foreign object might pass through your dog, there’s also a chance that it won’t be pooped out; you should always talk with a vet first.

There are some stark warning signs that things aren’t right, which indicate the foreign object won’t be passing through such as:

If your dog has swallowed a foreign object, please call a vet. Chances are your dog will be fine but should never take any chances. There’s no guarantee it will be pooped out.

Whilst my dog pooped the foreign object out and is passed inside of one day, he might not have been that lucky.