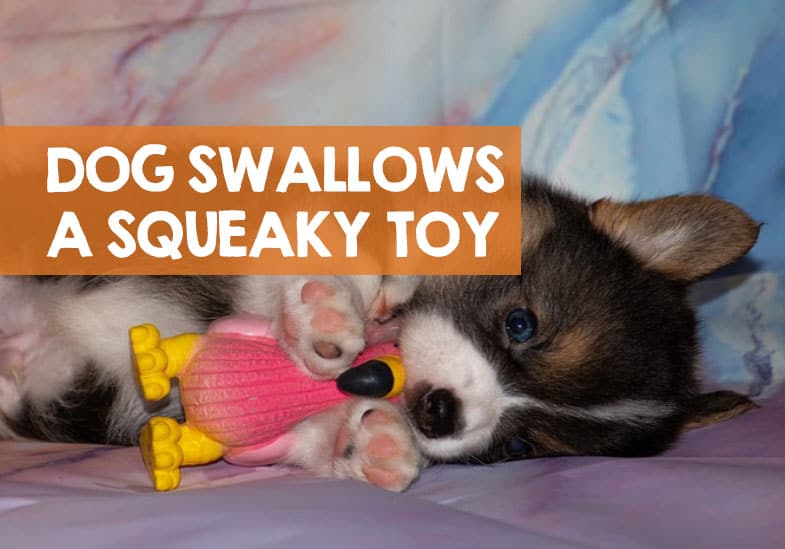 Despite what the manufacturers say, I am yet to find a squeaky toy that my dog can’t completely destroy. I don’t mind buying him a new toy each month, but what I am not so keen on is how easy the squeakers can be to swallow.

If your dog has eaten a squeaker from a dog toy and are not sure what to do, here’s the short answer followed by more detailed advice.

Do not reach into your dog’s throat as this might make the squeaker go further down. You vet might ask you to induce vomiting, but this is only an option if you are told to do so.

To confirm, call your vet immediately for advice.

What happened when my dog ate a squeaker?

I talk from first-hand experience because last year I found my dog chewing up his favorite toy. The stuffing fell to the floor, and he started to do this big chewing motion, when I heard the dreaded squeak in his mouth.

Your instinct is to make a grab for the toy squeaker when you see it in your dog’s mouth. That’s what I did, but unfortunately that produced the opposite reaction to what I wanted; he produced a reflex and swallowed it whole!

My dog was lucky.

My immediate action was to call the vet and then drive up there. The vet checked our dog over and made the call to let the squeaker pass as it was so small. Within 12 hours it had come out in his poop – I was thankful it was so small so there were no complications.

It might not have been that way though, as it’s not unheard of for toy squeaker to create internal blockages in dogs, leading to more serious problems.

Having gone through a scare like, I’ve decided to compile the steps you should take when your dog swallows a squeaky toy, as described by my vet.

What do when your dog swallows a squeaky toy

You should always act fast; here what you should do if you believe your dog swallowed the squeaky toy.

As soon as you see your dog eating a toy squeaker, you need to act. Vets say you have around 2 hours before the toy or foreign object gets to their intestines, so this time is critical.

Whilst you should remain calm, that doesn’t mean you should simply sit it out to wait if the squeaker passes through in your dog’s poop. Here’s how long it might take!

2. Can you see the squeaker?

If you can see the squeaker in your dog’s mouth and it’s not yet been fully swallowed, see if you can gently pull it out.

If it’s anywhere near in the throat, do not attempt to fish it out as you could push it down further.

3. Is your dog choking on the toy squeaker?

If choking starts and you were unable remove the squeaker from your dog’s mouth, you can attempt a Heimlich maneuver. There’s a video on YouTube which shows you how to do it as well as a further video on PetMD.com.

4. Do not induce vomiting unless your vet says

Whilst it might be tempting and makes sense to make your dog throw up, do not do it unless your vet tells you to. This is key, because if it’s a sharp object, it might cause more damage on the way back up… so describe the squeaker to your vet and wait for guidance.

If you do decide to induce vomiting, your vet “might” recommend you give the dog 2 teaspoons of hydrogen peroxide to make them sick (according to JustAnswer.com).

If you do end up at the vets, a number of things will happen. Depending on the diagnosis, your vet could induce vomiting at the clinic. It’s possible they would perform an X-ray or ultrasound first to see where the squeaker is before taking this decision.

When vomiting isn’t an option and the vet does not think the squeaker will pass in your dog’s poop, surgery is performed if the squeaker reaches the intestines.

How to tell if your dog swallowed a squeaky toy

Sometimes you might be unsure whether your dog actually ate the squeaker or not. Obviously not being able to find it is a big clue, but you still might be unsure.

It goes without saying but be safe rather than sorry and contact your vet. But there are certain symptoms and behaviors to check for if you suspect your dog swallowed a squeaky toy including:

How to stop your dog swallowing squeaky toys

The best way to stop your dog swallowing a squeaky toy in the first place is to prevent them having access to them. Unfortunately, it’s impossible to completely stop dogs from chewing things, so it’s a very real hazard that will always be there.

Unless of course, you completely ban all dog toys with squeakers from your home, which might not be a bad thing.

If you can’t do that, you need to treat your dog like you would a baby or toddler who is going through the hand to mouth teething phase.

That means constant supervision, keep things off the floor, change the toys they play with, and remove anything that’s too small for them to chew on from the house.

If your dog has eaten a squeaker from a dog toy, please call a vet. Chances are your dog will be fine but should never take any chances.