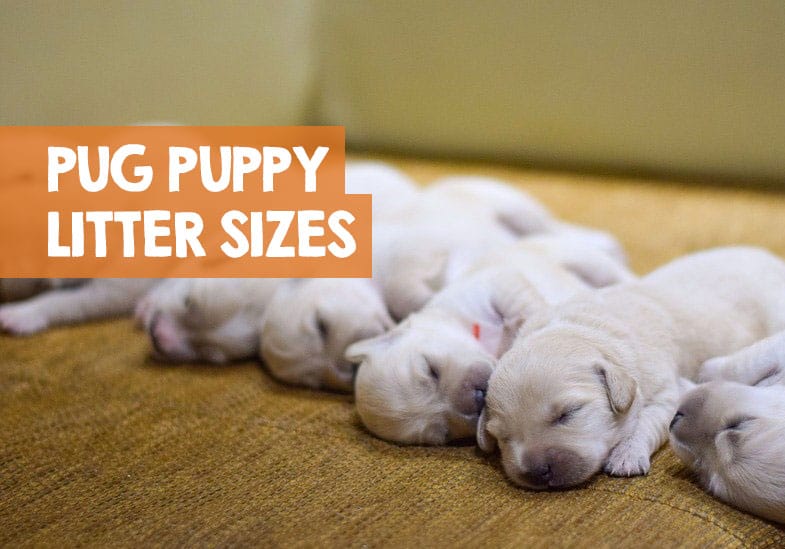 How many puppies do pugs have? On average Pugs have between 4 to 6 puppies in each litter. However, it could be as low as 1 or as high as 9 puppies. Your vet will be able to give a general estimate to how many puppies there are by doing an ultrasound or x-ray towards the end of the pregnancy.

Pugs are incredibly popular dogs, meaning that there can be money to be made in breeding them (see why they are so expensive). But the health of the mother and puppies is the most important aspect.

Whether it is a one-time pregnancy or if you are looking to start breeding your Pug, there are a lot of questions that you may need to know the answers to before the puppies arrive. Here’s some of what you will need to know…

How many puppies do Pugs have in a litter?

While the general estimation for a dog litter is around six, there isn’t one catch-all estimate for the number of puppies in a dog’s litter.

The number of puppies can changes depending on the breed and size of your dog, with smaller dogs such as Pugs having between three and four puppies on average. Compare that to medium and larger size dogs who can have around five to eight.

However, while Pugs are one of the smaller breeds of dog, their litter size can vary in number from as little as one or two to as big as nine or even ten.

The larger the litter the more strain is put on the mother, so if your vet estimates a larger litter or thinks that your Pug may find it difficult to give birth to her litter naturally then they may give you the option of caesarean section.

Below shows the average litter sizes for other breeds aside from Pugs:

How many puppies can a Pug have in their first litter?

There can be differences in the number of puppies if it’s your Pug’s first litter. For example, Pugs younger than 7 years old can have smaller litters, and in most cases, the first ever litter will tend to be on average smaller than most.

So, you could expect your pug to have between 3 to 5 puppies in their first litter, but it’s by no means guaranteed.

Can Pugs have their puppies naturally?

Because of their history as a breed, Pugs tend to suffer from a variety of health issues that could make bearing and delivering puppies naturally a bit of an issue.

One of these factors is their hips, which can be narrow and prone to dysplasia, making natural births painful, dangerous and even potentially fatal if complications were to occur.

Because of this, smaller dogs such as Pugs will often undergo caesarean sections, especially if they have had multiple litters. Breeders usually choose caesarean sections for their breeding dogs for the safety and wellbeing of both the mother and the litter, although this can prove costly.

If you are concerned about your dog giving birth naturally, speak to your vet who will be able to recommend the best course of action for your dog.

So, whilst pugs can have their puppies naturally, it’s far more common for the litter to be delivered by a C-section procedure.

But what about the lead up to the delivery? Well, here are some more details that you should also need to know when asking how many puppies Pugs can have.

Handy Hint: Before you think about buying a Pug, please read my guide on what to look for plus the questions you need to ask a breeder.

Signs that your Pug is pregnant

The signs of pregnancy in dogs, while not necessarily universal, are usually very similar from breed to breed. Unexpected labour can catch owners off guard, with no whelping box or supplies prepared for the new arrivals.

Knowing and recognising the signs that your Pug is expecting sooner rather than later is very important to the health and wellbeing of your dog, her puppies and also your general household. Here are some signs:

How long are Pugs pregnant for?

Like most dogs, Pugs are typically pregnant for between 53 to 63 days on average, although this can vary depending on the size of the Pug and her general health. Your vet may be able to provide a more specific, personalised estimate on the length of your dog’s pregnancy.

However, it is important that you keep an eye on your Pug once she starts heading into the final week of the pregnancy for signs of imminent labour, including nesting behaviour.

Puppies are usually fully formed at around day 58, meaning that labour can happen at any time.

How do you help your Pug give birth?

When you have noticed that labour has started, usually by checking for a sudden change in temperature in your dog from the normal temperature of around 101°F (38°C) to 99°F (37°C). Once this has occurred, labour will begin within the next 12 to 24 hours. It’s important that you have everything together and are with your Pug throughout the labour.

If you have decided for a caesarean section or a vet hospital birth, this is when you should take your Pug to the veterinary surgery.

However, if you have decided to help your dog give birth at home then you need to make sure that you have a whelping box prepared, as well as clean towels, heating pads, blankets and emergency medical supplies recommended by your vet (such as gloves, sterile scissors and antiseptic solutions).

Also, have your vet’s phone number close to hand in case of any emergencies or advice.

If your Pug is showing signs of labour, including a greyish sack dropping from the vuvla, but no puppy emerges within the next hour then it is recommended that you call your vet who will be able to advise you.

Also, if your Pug is showing contractions for more than two hours without any puppies being born, call your vet immediately.

When a puppy is born it will be covered in a thin layer of membrane that needs to be broken open and removed so that they can start breathing. Your dog will most likely do this herself through instinct, licking the puppy to stimulate its breathing.

However, if your dog is too tired to do this then you may need to do it yourself. Break open the membrane before rubbing the puppy vigorously with a towel to trigger its breathing. Again, if the puppy is not showing signs of breathing when doing this please get on the phone to your vet immediately.

The puppy will also be still attached to the umbilical cord. Normally your dog will chew through this herself, but if not then you will have to do so yourself with a pair of sterilised scissors. Cut (or rather crush to reduce bleeding) the cord around an inch above the belly of the puppy and tie off the end with dental floss and dip the end in an antiseptic solution.

After each Pug puppy emerges the placenta will also be discarded, around fifteen minutes after the birth. This can be immediately discarded, although your dog may try and eat it.

If she does this then that is totally fine as it is a natural instinct, although she shouldn’t be allowed to eat more than one or two just in case. Don’t worry if an afterbirth doesn’t come after the puppy as any remaining placentas will be discharged from the womb after the last puppy is born.

Once a Pug puppy is born and is breathing, place them in either the whelping box or in a lined laundry basket along with blankets and a heating pad.

Make sure that they are within view of the mother so that she doesn’t become distressed. Once all the puppies have been born and you are sure that the labour is over, take your dog outside to urinate (especially if the labour has taken several hours) before returning to the whelping box and allowing her to start nursing her pups.

Again, your vet will be able to offer advise over the phone if you are concerned about any of the puppies.

Pugs make for amazing pets, however due to their popularity increasing there as been a surge in unscrupulous breeders who use irresponsible practices. It can lead to a lot of health problems for the Pugs.

If you are thinking about buying a Pug and have seen the puppies in the litter with the mother, please also do additional research before you go ahead. I will be publishing a guide soon on what to ask the breeder…