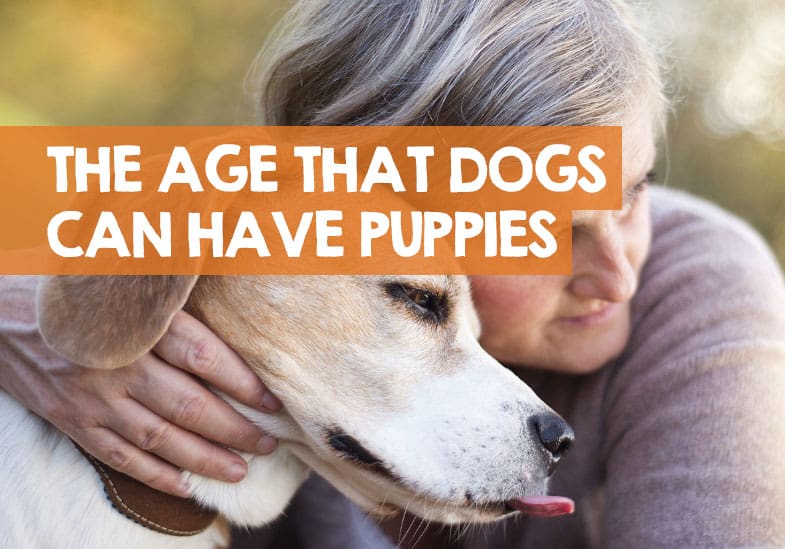 Despite older dogs not being as sprightly as their younger counterparts, there is still a chance that they could be fertile and even capable of breeding. As unlikely as it sounds, old dogs can have puppies, with females and males being able to breed into their later years.

But there’s a bit more to it than that, and some variables that come into play when considering what age you can breed a dog. Please read on in the best interests of your dog’s physical and mental health.

What is the oldest age a dog can have puppies?

The age a dog can have puppies will often come as a shock to those of us who own older dogs. Surely our old pooch is no longer capable of siring a new generation, especially when he is no longer as eager to go out for several walks a day as he was as a pup?

Well, the answer to that proves to be varied and complex. It can depend on a lot of different factors, many of which we will explore a little later on.

Let’s start off with the age a male dog can still have puppies.

What is the oldest age a male dog can have puppies?

When it comes to professional breeding, breeders will often retire their male dogs later than their females. For example, in theory, a male dog can still have puppies until they are around 10 to 12 years old. But it will often depend on their breed.

However, a variety of different factors can play a role into this.

For example, the age can a male dog have puppies will depend on their sperm quality and quantity. This can quickly decrease in older dogs.

Therefore, many breeders will check their dog’s sperm count regularly, sometimes even once a week, or at the very least, once a month.

Similarly, there are other tell-tale signs that breeders will look for to determine if their male dog is too old to have puppies. One of these factors is low conception rates. If a male dog tries to get a female dog pregnant during the best possible circumstances (healthy female, one mating per day) and fails to do this, then the breeder may decide this is a sign to retire the dog.

Additionally, they may also decide to retire them if their female partner regularly produce a smaller litter of puppies, or if they are experiencing bouts of illness or failing health.

Now what about how old can a dog have puppies when we’re discussing the female gender?

How old can a female dog have puppies?

Contrary to common belief, many older female dogs are still capable of getting pregnant. This should be a concern for female dog owners who regularly let their dogs off the leash.

However, with the right amount of responsibility, a bit of caution, and other preventative measures, the risk of your older dog getting into this situation can drastically be minimized.

In terms of biology, female dogs can remain fertile late into their life spans. Some female dogs are still able to have puppies at the grand old age of 10 years old. However, at this age, they will usually begin to have labor troubles, and complications during birth are common.

This can put the health of the older dog and her puppies at risk.

It’s also worth noting that how old a female dog can have puppies will also depend on the breed of the dog. As an example, some larger breeds commonly live relatively young lives, only to around 6 or 7 years old.

Therefore, they will begin to have trouble with breeding earlier on compared to smaller breeds of dogs who usually live longer – and can therefore be a much older dog when they have puppies.

In relation to this, it is worth noting that female dogs do not enter menopause (effectively meaning that they are capable of breeding throughout their whole lifespan).

However, as they get older and age, they will begin to lose their fertility.

Additionally, their heat cycles will slowly begin to get further and further apart, and due to this, it will become quite difficult for an older dog to get pregnant and have puppies.

Lastly, older females that do become pregnant and give birth may struggle to produce enough milk for their litter of puppies.

But what about specific ages of older dogs? Here’s a quick refresher for you.

Can a 12-year-old dog have puppies?

It is possible for a male 12-year-old dog to breed and have puppies. However, with female dogs, 12 years old is very rare, and will result in health issues for both the dog and puppies if the pregnancy was to go full term.

Can an 8-year-old dog have puppies?

It is possible for an 8-year-old dog to have puppies. However, it can be breed specific, as some larger dogs have shorter lifespans than smaller ones.

Can a 9-year-old dog have puppies?

It is possible for a 9-year-old dog to have puppies. However, it can be breed specific, as some larger dogs have shorter lifespans than smaller ones.

To wrap this particular section up, what the oldest age a dog can have puppies is really shouldn’t be the primary question. Instead, it should be how you can stop your older dog from having puppies and having potential health issues.

How to prevent an old dog having puppies

First and foremost, you should make sure your dog is spayed or neutered whilst they are younger, especially if you have no intentions of breeding them. However, if you do own a dog who is used for this purpose (even at an older age) or if you are unable to get them fixed, then there are several methods you can use to keep them safe.

Firstly, with unspayed female dogs, you should always make sure they are kept on their lead whilst on heat. Although all dogs will lose a bit of their vigor in their old age, there is always the chance that they might run off towards male dogs.

If you are not careful, they could easily be mounted, and you might be unable to stop the worst outcome from happening before it is too late. Even spayed dogs still have the ability to attract males, so don’t think it’s going to stop all problems you face when out walking.

Similarly, unneutered male dogs should always be kept on the lead around any unfamiliar female dogs at the park or whilst you are out on a walk. Even spayed females can still bleed and give off signals that could result in unwanted behavior.

Although you may be pretty confident in your older dog’s ability to listen to commands, there is always a risk that they may not listen to you on this specific day.

If you are the owner of both female and male dogs that are not fixed, you will also have to exercise some caution. Male dogs will struggle to control their urges when a female dog comes in heat, no matter how old they are.

Additionally, some male dogs may become aggressive if you try to separate them from a female when they are in this frenzied state.

Therefore, you should always make sure to keep your male dog far away when your female is in heat, either by containing them to one area of the house or by putting them in a kennel. Play and heavy activity should be kept to a minimum.

I’ve covered off what the oldest ages are that dogs can have puppies, but what about the youngsters?

At what age can a young dog have puppies?

Bringing a new puppy into the home can be one of the most exciting things for a dog lover to experience. However, it can also present its own unique set of challenges.

If you have ever owned a puppy yourself, you will know how difficult the first few months of ownership are, with accidents inside the home, destructive bursts of energy, and naughty behavior being pretty common for the average young canine.

Although they are very cute at this age, there is no doubt that they are a handful as well, especially for first-time owners.

Despite this, within very little time puppies begin to transition into adult dogs, losing some of their boundless energy and mischievousness in the process.

Although this can offer owners some respite and a chance to relax, it can bring about a new entirely different challenge – one that many owners are not often immediately aware of.

How long before dogs can have puppies?

However, it is worth noting that most puppies will reach sexual maturity when they are a little older, with 6 to 9 months being the most common age. This is the age at which they might be able to have puppies when young.

To make matters more complicated, unlike with male puppies, it is all too easy to be caught unawares if your female pup has never displayed any sexual behavior before.

This is particularly true for owners who have adopted an older puppy.

Additionally, certain breeds of pups will reach sexual maturity outside the normal period of time. However, depending on the pup’s breed, this can happen much earlier or much later than normal.

As our dogs get older, we inevitably begin to worry more about their health. Whether they are comfortable, if they are still able to enjoy life, and other things similarly related to aging.

However, what probably never enters our mind, is the real chance that they could still be capable of having a litter of puppies even into old age.

Whether you are a dog breeder interested in retiring your dogs or an owner eager to breed your dog for the first time, it is important to understand how old is too old for a dog to have puppies.

Additionally, you may find yourselves wondering how safe it is for your older dog to have puppies, especially if they have never had a litter before.

This is a sensible concern to have, as many owners may be interested to know whether they are running out of time to breed their beloved pooch.

This, in turn, can help you to keep your dog safe and avoid any potential disasters or dangerous complications that could arise from irresponsible attempts at breeding. Unfortunately, many owners still mistakenly try to breed their elderly dogs causing undue stress on the unfortunate canines.

Here are some recent guides you might want to read.