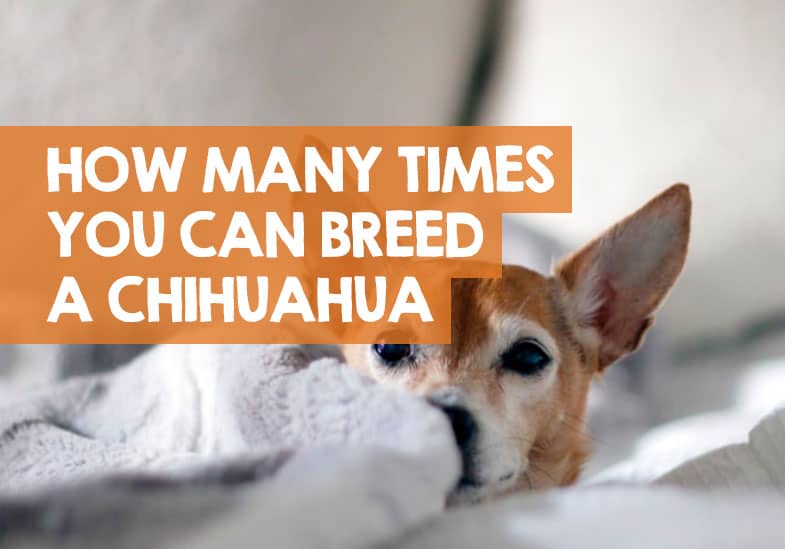 Whilst I do not breed dogs myself, I’m friends with a couple of breeders who I would place in the “responsible” category. Unfortunately, you can’t say the same for all of them; many will try to make as much money from their female Chihuahua as possible, breeding her multiple times.

But how many times can you breed a Chihuahua, and what qualifies as being a responsible number of pregnancies and litters?

To find out I got the opinion of the ethical breeders I know and got their professional opinions. Here are their personal points of view on what constitutes a healthy Chihuahua breeding cycle and regularity.

How many times can you breed a Chihuahua? Ethical breeders will only breed a Chihuahua between 2 and 3 times in their lifetime. The pregnancies should also be spaced out by at least 18 months at a minimum. Anything more than this and the dog’s health can suffer. Some breeders believe excessive breeding can also result in psychological implications.

There are many reasons why 2 to 3 is the minimum amount of times you can breed a Chihuahua, some of which I touched on above. But let’s get into the specifics a bit more, as it’s important for the well-being of the dog.

1. The risk of multiple C-sections

Many Chihuahua’s will have to undergo a Cesarean section. This is particularly common with younger Chihuahuas who have fewer puppies their litters – meaning bigger puppies, but more complicated births due to the sizes involved.

It’s not fair to put a Chihuahua through multiple operations of this type, as there are risks for dogs that have too many C-sections:

Pregnancy and birth followed by nursing of puppies is a hugely demanding time for the Chihuahua mother. It can take its toll both mentally and physically, so she will need time to recover between breeding.

If she has had a C-section there will be scars that need time to heal, with the internal ones being particular painful. She will also need to re-grow parts of the uterus and need the time and get muscle tone back to where it was pre-pregnancy.

The bottom line is that you should not breed your Chihuahua too many times as it can take a heavy toll on her body. Expert breeders suggest that once every year and a half, and no more than 2 or 3 times in her lifetime is best for her.

If you want the puppies to be officially recognized by an official association then you need to reduce the frequency and number of times you breed your Chihuahua.

For example, The Kennel Club in the UK will not officially register Chihuahua puppies that have been born within 12 months of a previous litter.

The Kennel Club is very clear about how many times you can breed a Chihuahua if you want the puppies to be on the national register:

“The Kennel Club will not accept an application to register a litter when the dam has already whelped 4 litters. The Kennel Club will no longer register any further litters from any bitch which our records show has already whelped 4 litters. Where the number previously recorded is 4 or more, the application will be rejected.” (source: thekennelclub.org.uk)

Their website also states the following not registering pedigree litters if:

How old does a female Chihuahua have to be to breed?

Whilst female Chihuahua’s can become sexually mature between the ages of 6 to 9 months, ethical breeders don’t recommend them mating until they are 2 and a half years old. The oldest a Chihuahua should breed will be 8 years old.

The reason the breeders I know suggest the earliest age to start breeding is because they say this will let the Chihuahua go through a few of heat cycles first.

Male Chihuahuas tend to become sexually mature by 15 months but can actually produce sperm as young as 6 months old.

Handy Hint: Find out how often and when your Chihuahua’s heat cycle will start.

How many times a year can you breed a Chihuahua?

The three different breeders I spoke to agreed that you should not breed a Chihuahua more than once a year, and even then, that’s probably too many times.

Healthy Chihuahuas should be able to get pregnant during each heat cycle, but just because they can, doesn’t mean that they should.

As previously discussed, Chihuahua females need a good amount of time to recover from the pregnancy, birth, and looking after her puppies. Her body probably won’t be able to deal with another pregnancy so soon after.

That means limited how many times you breed your Chihuahua to once every 18 months to 2 years, as more than this is considered negligent and cruel.

One of the Chihuahua breeders supplied the following breeding cycle guidelines.

I’ve published a lot of content on DoggySaurus about Chihuahua puppies and pregnancy. If you are thinking about breeding Chihuahuas, then you might the following pieces of content helpful in knowing what to expect:

Chihuahuas aren’t easy dogs to breed. They come with more health problems than larger dogs, so you need to be responsible and aware of all possibly issues.

Ultimately, the Chihuahua breeding cycle is complicated, comes with risks, and is not something to take lightly, or simply to make a quick buck. There are enough unwanted puppies in the world, so please take your time in making a decision.