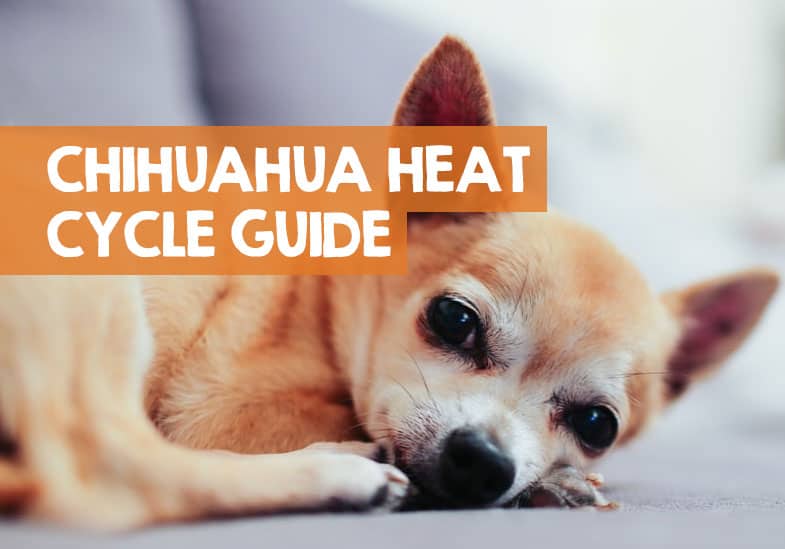 Whether or not you plan to breed your Chihuahua, it’s useful to know all the details of her heat cycle. A female Chihuahua who has not been spayed will typically face a variety of physical and behavioral changes throughout her lifetime.

I am going to start off this introduction to the Chihuahua heat cycle with some very quick pointers on how often it happens, how to tell, and how long the heat will last. I will then go into each aspect of the heat cycle in more detail.

How often do Chihuahuas go into heat?

Unless you have spayed your Chihuahua, she will enter her first heat (also known as a season) at around six to eight months of age.

How often do Chihuahuas go into heat? After her first heat at 6 to 8 months, your Chihuahua will then go into twice a year, typically every 6 months. Initially, her cycle may be sporadic, but after the first year or two, you should notice her reproductive cycle settling into a regular pattern.

The average Chihuahua will go into heat once every six months. Occasionally, she might show signs of going into heat between these regular cycles, but she will typically be infertile during these additional seasons.

Once an Chihuahua reaches six years of age, her fertility will start to slow down. Fertility will continue to drop off until roughly ten years of age when her ability to reproduce typically ceases altogether.

That said, unless spayed, a female Chihuahua will continue showing signs of going into heat for the rest of her life.

How do you know when your Chihuahua is in heat?

You will know your Chihuahua is in heat due to a range of signs including:

The reproductive cycle for dogs is made up of four distinct stages, each with its own physical and behavioral changes. Read about each stage below, including the Chihuahua heat cycle length and what to expect.

Typically, this is the stage that most people are referring to when they say that their Chihuahua is in heat. On average, this initial stage of the reproductive cycle lasts nine days for most dogs, but it can last anywhere up to twenty-seven days in total.

During this stage of the reproductive cycle, estrogen levels will begin to peak in your dog, and the follicles (eggs) will start to develop. Most owners may start to notice male dogs showing an interest, although the female Chihuahua will not reciprocate during this time.

Physical signs include a swollen vulva and a blood-tinged discharge. Although many dogs will keep this area clean, Chihuahuas tend to have a hard time reaching this area. To avoid any messes, many owners recommend using diapers.

Attention from male dogs will continue, but now the female Chihuahua will be receptive to these advances. One of the most common ways your dog may show her availability is by “flagging”, where she lifts her tail up or to one side.

It may also result in aggression from females, which can sometimes escalate into fights. If you have no intention of breeding your Chihuahua during this period, it will be necessary to keep her away from other dogs as much as possible during this time.

Aside from these behavioral changes, you may also notice several physical changes. Even though a loss of appetite is common during false pregnancies, the female Chihuahua may stay at the same weight, owing to fluid retention.

If you suspect that your Chihuahua is pregnant, it would be best to take her to see your vet as soon as possible. Pregnancies in Chihuahuas must be carefully monitored from the onset due to the health risks involved, both for the puppies and the mother.

Handy Hint: Here are some ways you can check to see if your Chihuahua really is pregnant or not.

When it comes to breeding, Chihuahuas are some of the most challenging, time-consuming, and expensive dogs to breed.

Your female Chihuahua could have around 3 puppies in a litter.

Handy Hint: There’s a limit on how many times you can breed a Chihuahua. Find out all you need to know here.

How to prepare for your Chihuahua being in heat

Now you know how long and how often your Chihuahua will be heat, it’s time to get prepared. By doing so, you can guard against your girl getting pregnant unexpectedly, leaving messy blood spots on the floor, and even possible changes to behavior including aggression.

On the day your Chihuahua starts her heat cycle, place a note on your calendar. I’d use your phone’s calendar as you can record day 1, and then put a reminder in that it could come again in 6 months’ time.

Some dogs will try to escape during their heat cycle and can show aggression. If this sounds like your Chihuahua, think about keeping her secured using door gates, or just being more vigilant than usual – perhaps an off-leash walk isn’t a good idea during this period!

My wife and I recently looked after a female Chihuahua who came over to play with our Frenchie, Claude. The female hasn’t been spayed yet, so it wouldn’t surprise me if she started to show signs of going into her first ever heat cycle very soon – she’s 7 months old.

When that happens, our friend will need to be prepared, as the Chihuahua heat cycle can be quite a shock if you’ve never owned a female dog before.

There’s a wealth of information on the DoggySaurus website about Chihuahua ownership: