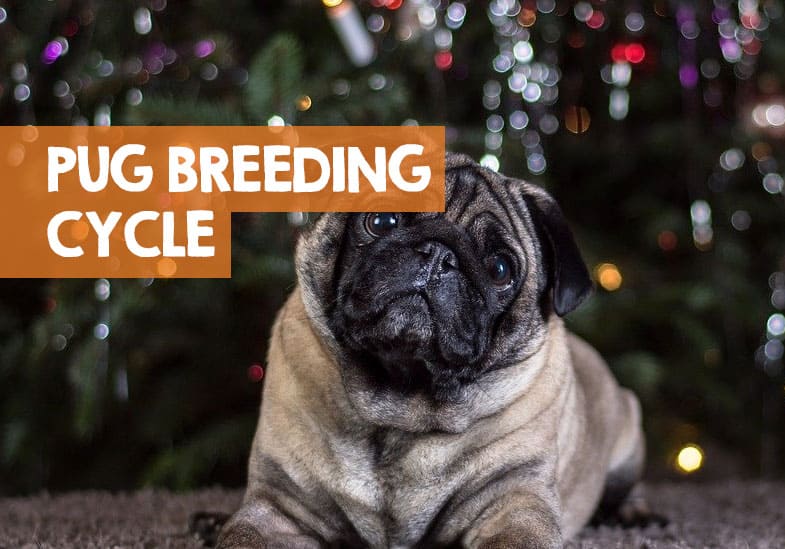 I don’t breed Pugs and have no intention of ever doing so. But as a dog owner, their welfare due to breeding practices is something I am very passionate about. Pugs are one of those breeds who have become more popular in recent years, and that has led to some irresponsible breeders looking to cash in.

This leads to some of the more unscrupulous ones breeding their Pug too many times. This causes health problems for the mother and sometimes the puppies.

Not all breeders do this though. If you were to as a responsible one how many times you can use a female Pug for breeding, they will probably say something along the lines of:

How many times can you breed a Pug? Responsible Pug breeders won’t breed their Pug more than 3 (possibly 4) times in a dog’s lifetime. The Pug mother should only be having litters every couple of years, with 18 months at least between puppies. More than that can lead to physical and mental health problems for her.

Reasons to not breed Pugs too often

The reasons why there’s a minimum amount of time you can breed a Pug are varied, but they all come back to one thing; ethics and care. If you care about animals and care about your Pug, you would not breed them frequently, and here’s why.

1. The damage of regular C-sections

Many Pugs require a Caesarean section to give birth. Their brachycephalic nature means the breed tends to have very narrow hips and birth canals and have puppies with large heads. This can make natural births very risky for both mother and puppies, hence the high percentage of C-sections.

However, the more C-sections a Pug has, the riskier things can become, for example:

Pregnancy and birth can take a huge toll on the mother Pug’s body. It’s not just physical affects, but mental ones too.

For example, she might have scarring from a C-section that needs to heal and her body will have changed and become tired through feeding. For example, when a dog gives birth and then nurses her litter, she will lose a lot of muscle tone that will need to be developed back up.

This is why nobody should ever breed their Pug more than once every two years. Many breeders will go every 18 months, but I think even this is too much – she needs to be given enough time to recover.

If you want your Pug puppies to fit the breed standard set out by the UK and American Kennel Club, then you should not breed them too often. I believe that both associations won’t recognise a Pug puppy if the mother gave birth in the previous year prior.

The UK Kennel Club are actually very clear on how many times you can breed a Pug, and why they won’t officially register the puppies if this rule is flouted:

“The dam has already whelped 4 litters (as of the 1st January 2012 the limit changed from 6 litters to 4 litters). As of this date the Kennel Club will no longer register any further litters from any bitch which our records show has already whelped 4 litters. Therefore, for any litter born on or after the 1st January 2012, the system will automatically check to see how many previous litters the Kennel Club has an account of. Where the number previously recorded is 4 or more, the application will be rejected.” (view source).

In addition to this, they also say that they will not register pedigree Pug litters if:

How old does a female Pug have to be to breed?

Female Pugs can breed from the age of 2 and a half years old, up to an age of 8 at the maximum. These are said to be the safest ages at which breeding should be allowed. It’s because they will have gone through enough heat cycles in this bracket.

Handy Hint: Read this guide so you know what to expect from your Pug’s heat cycle.

Male Pugs become sexually mature a little earlier, being able to breed from 15 months of age. Some Pugs will producing sperm younger than this, sometimes as early as 6 months but that’s still too early to have them sexually active and breeding.

How many times a year can you breed a Pug?

Most responsible breeders will agree that you should not breed a Pug more than once a year, preferably every two. Having said that, biologically a health female Pug can produce a litter of puppies at every heat cycle – but that doesn’t mean she necessarily should.

As I mentioned previously, your female Pug will need the time to recover after birth. Whilst coming into heat signals she is capable of giving birth, it doesn’t mean it’s the right thing to do for her body and overall well-being.

Handy Hint: If this is your first time breeding you might find this article useful; how to tell if your Pug is pregnant plus the various pregnancy stages.

Breeding your Pug more than once every 18 months to 2 years can be considered irresponsible and cruel. Give her a longer gap than that and she will be able to recover and enjoy the time without carrying puppies without any stress.

In simple terms, here are some good guideline to follow for how many times you can breed a Pug, and their breeding cycle frequency:

Now you have an overview on Pug breeding frequency you might also find these other guides helpful if you are considering yours having puppies.

Should you breed your Pug?

Well, just because your Pug is a fantastic dog with good temperament and character it doesn’t mean she will make good puppies. Do you really need to add more dogs to the world?

It’s entirely up to you of course but should not be taken lightly. The Pug breeding cycle is complex and comes with risks, so do as much research as you can, and don’t just do it to make a quick buck!