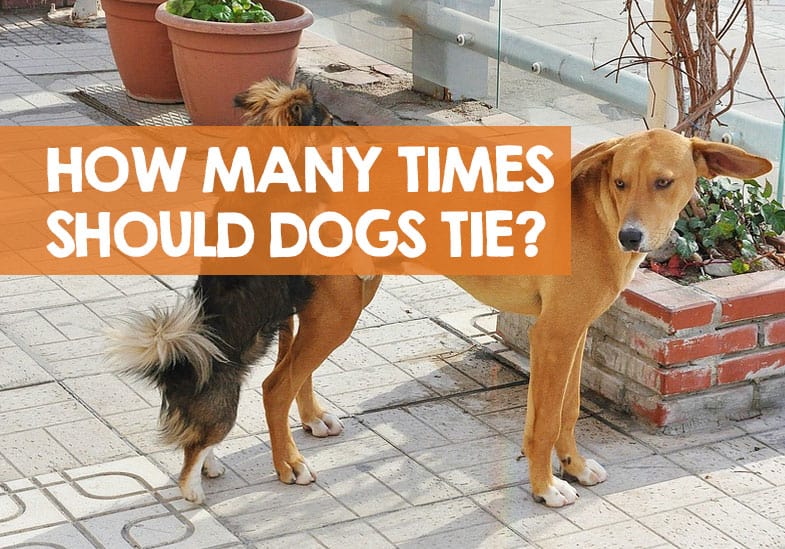 Breeding dogs is best left to the professionals. It’s not something I have ever done, so the content in this guide was written by a local dog breeder who explains how many times a breeding pair of dogs should tie to get pregnant.

How many times should dogs tie when breeding?

In many cases dogs only need to tie once when breeding for a successful impregnation to occur and for the female dog to become pregnant. If the dog breeder manages to get the timing of the mating correct, the chance of the female being impregnated will increase tenfold.

That being said, female canines will rarely voluntarily stop mating unless they are separated from the male stud, regardless of whether they are pregnant or not.

Many dog breeders also perform a variety of tests to determine when their female dogs are ovulating before they encourage mating to occur. By utilizing this information wisely, dog breeders can achieve their task by breeding the stud and ovulating females just once per day.

In general, male studs are in great demand and may be required to mate with several females within the same day. For this reason, they are encouraged to exit the copulatory tie quickly and move on to copulate with the next available female as soon as possible.

However, there are no set rules for the number of times a male dog can breed. If given the chance, they may attempt to breed upwards of ten times or more in one day before finally collapsing out of exhaustion. Likewise, it is not a rare occurrence for canine pairs to be stuck in a tie multiple times a day if not prevented from doing so by their owners.

How does the copulatory tie work?

For dogs to mate correctly and without problems, many different stages of copulation must take place. One of these stages, the copulatory tie, is famous for its peculiar trait of locking female and male dogs together by their genitals. But why does this happen, I hear you ask?

Well, during canine sexual intercourse, the male dog’s penis becomes heavily congested with blood and swells to a large size. In addition to this, their bulbourethral gland, found at the base of the penis, greatly enlarges, too – sometimes reaching up to 3 times its normal size.

In response to this, the female dog’s vulva will contract tightly around the male’s penis, locking both organs tightly together. From here, the male dog will commonly change his position, lifting his leg up and over the female’s rear. This adjustment results in the dogs facing away from each other, appearing to be stuck together by their butts.

To humans, this strange tie behavior may seem unnecessary and uncomfortable looking, however, the tie serves an important purpose for canine breeding. Essentially, the copulatory tie ensures that the semen is secured inside the female, increasing the chances of a successful pregnancy. For this reason, many dog breeders believe that this stage of copulation is the most important and vital one.

How long should dogs tie for?

In the majority of cases, dogs will only be stuck together in a copulatory tie for around 5 minutes or even less. However, despite this, it is not uncommon for the tie to last for longer periods, sometimes taking upwards of 20 mins or more before the canines can easily begin to separate from each other.

In general, the how long your dog should tie for will depend on several varying factors, such as the breed of your dog and its personality and temperament.

For example, nervous dogs can quickly become anxious if they are unable to escape and may panic and struggle whilst still stuck butt to butt with their breeding mate.

Unfortunately, this will often cause the copulatory tie to lock up further, trapping the dogs until they both manage to relax. For this reason, male studs (dogs specifically utilized for breeding) will almost always have a significantly easier time exiting the tie compared to dogs who are new or unfamiliar with breeding.

Is the copulatory tie painful?

Whether or not a dog feels pain during a tie primarily depends on its breeding experience. For example, male dogs breeding for the first time may have trouble locating the correct position and hurt themselves in the process of copulation.

Similarly, they may try to dismount the female or move when experiencing anxiety or fear, causing them significant pain.

Despite this, you must never attempt to try and separate your male dog whilst it is in this breeding position, regardless of whether they are experiencing pain or seem highly distressed.

With regards to female dogs, they will almost always experience a higher amount of pain than their male counterparts, this being particularly true if they are virgins or inexperienced.

Therefore, when attempting to breed your female dog for the first time, it is important that you comfort her and stay in the room or general area. Without reassurance, female dogs may try and escape when the male mounts her, badly injuring both canines in the process.

How do you care for dogs during a copulatory tie?

As previously mentioned, dog breeders must do their utmost to keep their female dogs calm and comfortable whilst the copulatory tie is still ongoing. If you find yourself in a situation wherein your female dog is becoming stressed, you can gently stroke her coat until she begins to calm down and relax.

Alongside this, you can also speak to her in a soothing voice and offer treats. However, if your pooch still continues to struggle, do not try and separate them. Instead, back away and leave them to separate by themselves. At times, well-meaning dog owners will only further stress their dogs by fussing around them.

How can you tell if the process goes wrong?

In very rare cases, some dogs may become stuck in the copulatory tie for over an hour or more. Unfortunately, this is often extremely painful for both dogs involved and can be upsetting for dog owners to observe.

Despite this, there is relatively little that dog owners can do to resolve this issue and given enough time it should resolve itself naturally without any intervention. If this happens to your dogs, ensure that you comfort them and give them plenty of time to rest once the tie is completed.

However, if the dogs show no sign of separating, contact a vet and ask them for their advice.

From time to time, the stud may withdraw his penis from the female before it has become swollen and stuck in her vagina. In dog breeding circles, this is known as slip mating and is a common occurrence when females are not up for breeding or are inexperienced or young.

Typically, this phenomenon is nothing serious and is usually caused by the female moving away just after the male has penetrated her.

Without the proper amount of knowledge and prior experience, breeding dogs for the first time can prove to be an extremely anxiety-inducing experience. For many first-time dog breeders, the ins and outs of canine copulation can seem overly complicated with so many processes that could potentially go badly wrong.

How many times you should let dogs tie when breeding being a classic example.

Unfortunately, this sentiment of complication is partly true. Without caution, dog breeding can quickly turn hazardous and should not be attempted without thorough research and advice.

However, when breeding outcomes are successful, pet parents have the opportunity to bring a beautiful litter of new puppies into the world. For this reason, many dog owners find themselves desperate to master the skills of breeding.

In general, the most anxiety-inducing part of the breeding process is called the tie. This strange sexual behavior is relatively unknown to most dog owners and can appear to happen only as a result of something that has gone wrong.

Although this behavior may look odd, it is a natural phenomenon and is in no way indicative of a problem occurring during the mating process.