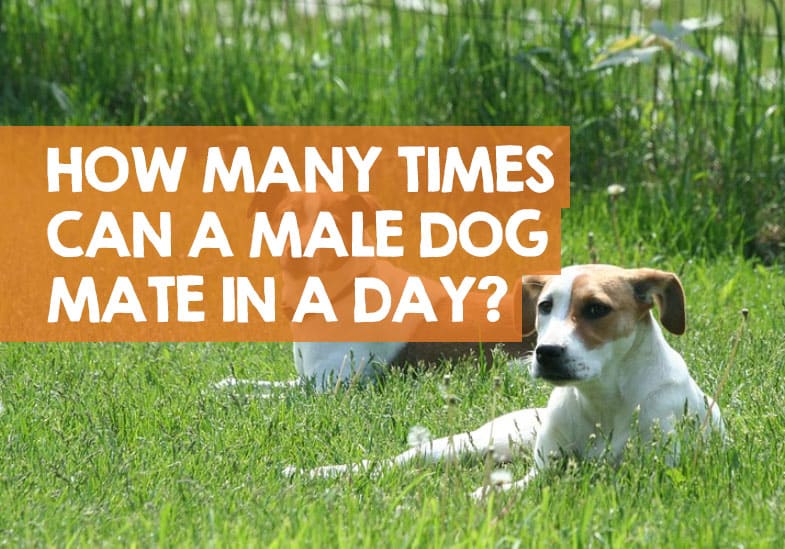 Many breeders of male dogs, or those looking to breed their female with a male will wonder how many times a male dog can mate in one day?

Even if you are not a breeder, it is important to understand how often your male dog can breed. It can make the difference between whether you are dealing with a litter of planned or unexpected puppies, and potentially save you from a lot of stress in the long run.

As with many things, the answer isn’t as clear cut as you might think. Here’s what I’ve learned as a dog owner.

How many times can a male dog mate in a day? Male dogs can mate multiple times a day, often without tiring. However, the sperm will deplete the more times in a day the dog mates, but it’s possible for females to get pregnant even if they are the third the male has mated with that day.

How many times can dogs mate in a day successfully?

Depending on a number of different factors, it is generally accepted that a male dog should only mate with a female twice in one day (here’s more on how often they should tie).

Regardless of this, if a male dog is given the opportunity to mate with multiple females throughout the day, he probably will. There are no rules when it comes to how many times a male dog will attempt mating. In fact, some dogs have been known to try and mate up to 10 times a day, or more!

Does a male dog lose interest after mating?

That being said, age is another factor to take into consideration. Older dogs will sometimes lose interest in mating due to a decrease in their libido, and as such – be less interested in females.

Likewise, the health of your dog also can come into play when a male dog loses interest after mating. Other factors such as its personality and temperament can also play a part.

Is it bad for male dogs to mate more than twice a day?

Studs are male dogs that are used to breed litters of puppies and are crucial to the livelihood of breeders. They are rigorously taken care of, fed specialized diets, and treated as if they are royalty.

Some dog breeders only mate them weekly, whilst other dog breeders mate them a few times a year. However, all of them agree that a stud should never be mated more than once a day.

In fact, most breeders will rarely allow their dogs to mate even once a day. This is due to the belief that the quality of the sperm of the stud will suffer if he is bred too often.

They believe that this affects how successful they are at impregnating females.

In many cases. the chance of a bitch getting pregnant is a lot less likely when a male dog has mated twice in one day. This is, of course, due to a lower concentration of sperm, as previously mentioned.

However, this is not always the case. There is a chance that a bitch will get pregnant even after the stud has mated twice before.

If you have two bitches at home and are only breeding one, you should be careful if both of them come into heat at the same time, as both will want to mate with the stud.

Remember to act responsibly and keep the non-breeding female and male separated to prevent an unwanted pregnancy.

How many times can a male dog mate in a month and year?

Male dogs are quite capable of mating successfully every day. That means, it’s entirely possible for a male dog to mate 30 times in a month, and all year around.

However, their sperm won’t be as strong if mating daily, the chances of impregnation could reduce… and the male could be very tired!

To explain more, unlike females, non-neutered male dogs can breed at any time of the month or year. Simply put, they do not have a heat cycle.

However, if they are successful or not depends on whether the female is in heat at the time. If a male mount a female whilst she is not on heat, then there is no chance of impregnation.

Handy Hint: Did you know it’s possible to bring a female dog into heat faster?

Female dogs (or bitches), come into heat around twice a year, with roughly 6 months in-between each cycle. However, the time of year that their season falls on varies between bitches and depends on the date that they were born.

This means that there are always bitches available that are on heat, regardless of the time of year.

This, of course, can be worrying for us owners with unneutered dogs, or dogs that we are waiting to breed, as well as for the owners of bitches in heat.

After all, the last thing any of us want is a surprise litter of puppies on our hands!

To minimize the risk of this happening, it is important that we keep our unneutered dogs on a leash at all times, especially in areas popular among dog walkers. Without taking this into consideration, we could end up in a situation where our dog mates with a bitch in heat.

Likewise, the same is true with owners of female dogs who could come across an unneutered dog.

At what age can my dog start mating?

The average male dog can begin to breed at around 6 to 12 months. However, this is not exactly a set rule. Not every dog reaches sexual maturity at the same time, and there is often some variation between breeds.

As your puppy gets older, you will notice he will begin to start acting strangely. He might start humping things around the house (such as your leg, or an unfortunate cushion), or start scenting things with his urine.

These will all be indicators that your dog is starting to come into sexual maturity.

Of course, these aren’t exactly the sort of things we want to be dealing with as owners, but it is important we are patient and realize that it is completely normal.

Nevertheless, a firm word and repeated instruction are often needed to deter our pups from continuing to hump or pee on things at home.

Will my dog stop trying to mate after it has been neutered?

If you are wondering if neutering will stop your dog’s habit of humping anything that moves, this will again depend on its personality traits and the level of libido it had prior to getting the snip.

However, there will almost certainly be changes in your dog’s behavior. Some dogs will act calmer than before, while others will become more submissive or less energetic. All of these things combined will have an effect on the sex drive of your dog.

How do I stop my dog from mating if it becomes a problem?

There are times when a male dog’s desire to breed can cause problems for us owners. For example, male dogs can sometimes enter into a frenzied state when in the presence of a female in heat, causing them to exhibit unpredictable behavior.

This is rarely ever aggressive, but some caution should be taken if you need to remove a male dog from the vicinity of a bitch in heart.

You may notice that your dog will begin to stop listening to commands and try to run off if there is a bitch in heat nearby.

Likewise, you will want to be extra careful that he doesn’t try to escape from your home, as he may well make an attempt to do this.

Do not underestimate your dog, as he could escape through numerous means. Some dogs have been known to jump over fences, whilst others have escaped by digging themselves out of the garden.

To reduce the chance of our dog escaping from our home we can escape-proof areas in our garden.

To do this, we should go into our garden and check for any areas where our dogs have been digging, such as close to the fence, filling in any holes we might find along the way.

Also, it is a good idea to make sure gates and other entry points are locked and secured, as is checking fences for weak points or gaps.