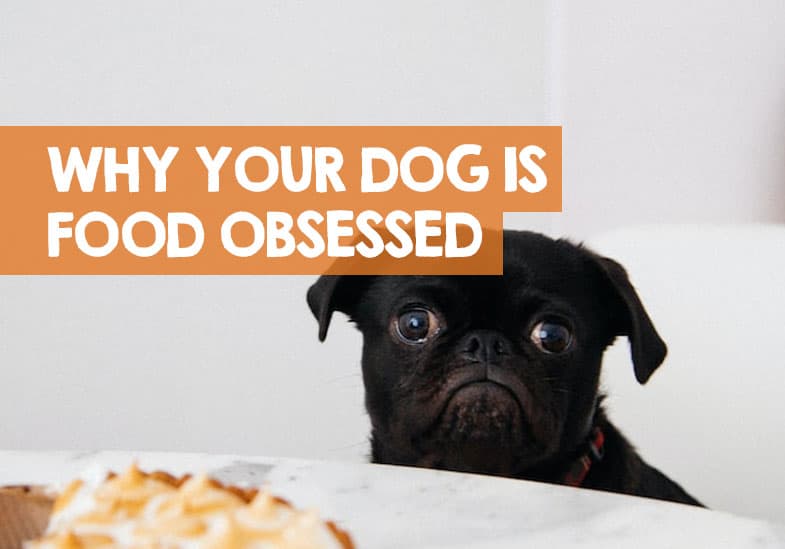 One of our dogs is far more food obsessed than the other. I only have to walk towards our fridge and he jolts out of his bed and runs over. You’d think we didn’t feed him as he acts like he’s constantly starving?

There are good reasons why my dog so obsessed with food, so I will share those with you now, so you can apply this to your own dog or puppy. Firstly, a short overview.

My dog is so obsessed with food due to habit (i.e., you being a source of food), a strong survival instinct, an underlying health issue, poor diet, psychological distress, and past experiences with scarce food, amongst other reasons.

Below I will explain in more detail, plus how you might be able to stop your dog being so obsessed with food, including human food.

Why your dog is obsessed with food

Every hungry dog gets excited during mealtime. But if your dog often goes bonkers every time they see or smell food, it’s natural to worry.

Maybe it’s how they bolt into the kitchen whenever they hear the fridge door open. Or the way they clutch onto your arms with all their strength as you pour food into their bowl. Or how they try to steal from your table when obsessed with human food.

Or worse, how they prey on your food and leftovers in the trash despite feeding them minutes ago. What could be causing your dog’s food obsession?

1. They have a strong survival instinct

Your dog’s food obsession could be an inherited instinct from their canine ancestors — wild dogs and wolves. While hunting in the wild, wolves and wild dogs viewed food as a prize that never comes easy.

And whenever they caught prey, they would eat up greedily since they didn’t know when they would be lucky enough to find food again.

Your dog likely inherited this “feast or famine” mentality. And a strong one, for that matter, as they often appear to not know when to stop eating.

They probably think that anytime you offer them food, they have to gobble it down and search for more because it might all disappear.

2. Your dog has an underlying medical condition

There are many health conditions that interfere with proper nutrient absorption in a dog’s body or increase metabolism.

When your dog’s body doesn’t absorb all the nutrients from food, they will develop nutritional deficiencies. These deficiencies often trigger insane food cravings.

Increased metabolism makes your dog’s body burn calories faster than usual. As a result, your dog will constantly have hunger pangs that will make them go crazy over food every time.

The medical condition behind your dog’s food obsession could be:

Intestinal worms are also notorious for making a dog want to eat more, even when you’ve already fed them enough.

In some dogs, the obsession might be because of a particular gene, the POMC gene — short for pro-opiomelanocortin gene.

The POMC gene normally controls your dog’s appetite. If a chunk of this gene is missing in their body, your dog may turn into an eating machine.

Research shows that dog breeds like Labrador retrievers, dachshunds, and Beagles are most likely to have this gene fault.

3. Food scarcity mentality from past experiences

This may be the case if you have a rescue dog obsessed with food. It’s not unusual for them to eat food that belongs to your other dog, or even stealing food from your cat.

If your dog had a rough past where getting a proper meal wasn’t guaranteed or had to fight with other dogs to get their share of food, the obsession might stem from their past experiences with scarce food.

Seeing food in abundance simply makes them want to do everything to get it because they think of it as something extremely rare.

Are you sure your dog’s regular food has the right balance of nutrients? Does it have enough fiber — which often keeps a dog full?

What about the portions you serve your dog?

There’s a good chance your dog often feels hungry most times because they don’t eat the right amount. Or because they’ve developed nutritional deficiencies (that lead to intense food urges) due to their low-quality diet.

Several studies show that just like humans, some dogs can also stress-eat.

If there’s been a major change in your dog’s life — maybe you’ve moved to a new place or brought in a new family member — they might resort to food to cope with the many strange emotions they’re feeling.

You may think your dog has developed food obsession “out of nowhere.” But in real sense, it’s the negative emotions making them act desperate for food, and try stealing from countertops.

6. It could be the medications

If your dog’s food obsession cropped up after they started taking a particular medication, there’s a possibility that the drugs have taken their appetite and food enthusiasm to a whole new level.

How do I stop my dog from being obsessed with food?

Food obsession puts your dog at risk of obesity They will constantly sneak into the kitchen to find leftovers to fill their belly.

Plus, their ritualistic cry for more food will trick you into offering them a little more every time to stop the unending begging. And before you know it, the extra pounds will come knocking.

Another problem with food-obsessed dogs is that they dig into their food so fast that they throw up, choke, or bloat. The last thing you’d want is to deal with an “emergency” during feeding time.

If you’ve noticed your dog’s relationship with food has changed for the worse, it’s best if you schedule a vet appointment. Your vet will run some tests to determine whether there’s a medical condition behind your dog’s food obsession.

It’s also important for you to chat with your vet about the food your dog eats and the portions you often serve them.

If there’s anything faulty with the diet or portions, your vet will recommend dietary changes that will curb your dog’s food obsession.

Here are other steps you can take to resolve the problem

FAQs on your dog’s food obsession

What causes a dog to be obsessed with food?

As discussed earlier, there are several potential reasons. The obsession could be caused by an underlying health issue, a survival instinct, psychological distress, past experiences with scarce food, and poor diet or incorrect portions.

The food obsession could also be triggered by the medication they’re taking.

Why is my dog so desperate for food?

They might have an underlying health issue, are psychologically distressed, or are genuinely hungry because their diet is poor, and portions aren’t enough.

It could also be due to a strong survival instinct, past traumatic experiences involving scarce food, or a particular medication making them extra hungry.

Why does my puppy act like he’s starving all the time?

As mentioned earlier, maybe your puppy has an underlying health issue, isn’t eating a quality diet or the right portions, is under stress, or has a strong survival instinct.

Image in header via https://unsplash.com/photos/D44HIk-qsvI