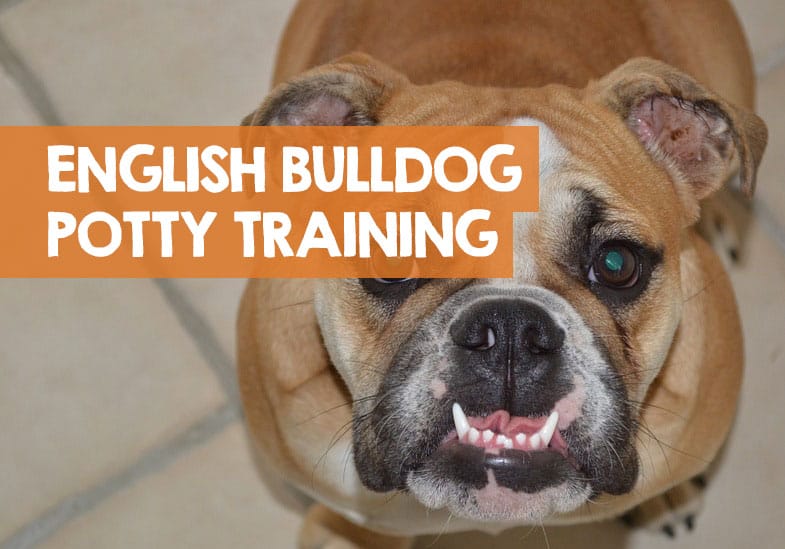 Bringing home your English Bulldog puppy for the first time will be an exciting experience, but it will come with a lot of challenges.

A huge part of adapting your puppy to domesticated life is toilet and potty training. You’ll need to teach them to distinguish when and where is and isn’t appropriate to go to the toilet but be aware that each and every puppy is different, and it could take more time than you expect.

You will need lot of patience, positivity and preparation, and there will definitely be bumps along the way, so it is important to not get disheartened at the first hurdle.  Just keep persevering with your new friend and soon, before you know it, they’ll be fully toilet trained and one step closer to feeling at home with you.

How to potty train an English Bulldog puppy

As dog owners ourselves, I remember saying to my wife that having a puppy was like having a baby all over again – it really is that challenging, and you need to adopt a strict potty-training routine – here’s how we did it.

What you will need:

When you first start house training your English Bulldog puppy, you should aim to build a routine around their toileting needs.

Luckily, their bladders and bowels are fairly predictable, as they are determined by not only their sleeping pattern, but also what they eat and drink.

We actually started up a diary of what our puppy had eaten and and how often and what times he tended to urinate and defecate. This really helped us to adapt our routine in accordance with our puppy’s habits.

As mentioned, food and drink are a huge indication as to when you should take your English Bulldog puppy out for potty breaks, with mealtimes integrating into a puppy’s toileting routine alongside the guidelines set out above.

All puppies have immature diet systems, which means that each meal tends to stimulate their digestive system faster than it would in adult dogs. Generally, puppies need to urinate within fifteen minutes of eating and defecate within half an hour of eating.

The nature of a puppy’s digestive system also means that they can handle less food at once, so it is best to give them three smaller meals three times a day rather than two bigger ones twice a day. Once your dog has finished eating, take away the food bowl until the next scheduled mealtime. This will prevent your puppy from overindulging.

Handy Hint: If you need more guidance on how much to feed your English Bully, please click here where I explain how many cups of food is enough for them, plus a feeding chart.

You should also ensure that the food you give your puppy is of the higher possible quality – this means avoiding dog food with artificial colours and preservatives and ensuring that real meat is the primary ingredient.

When your English Bulldog puppy is in the early stages of potty training, it is good to confine to a small area such as a room, a crate or via a lead until you are confident that they can roam the house freely without accidents.

Furthermore, consistency goes hand-in-hand with confinement, and it involves introducing your dogs to select areas to toilet in so that, over time, they will learn to associate going to the toilet with that area of the house or outside.

A good way to ease your dog into this component of toilet training is via puppy pad training or crate training.

Puppy-pad training is good to introduce the idea of your dog going to the toilet in a select area, but isn’t useful as a long-term solution, because ideally, you’ll want your English Bulldog puppy using the toilet indoors rather than outdoors.

Essentially, the purpose of the puppy pad is not only to reduce mess, but also to get your puppy used to the idea of doing their business in an approved, select area indoors (an area that is easy to clean up!).

Overtime, your puppy will learn to associate the pad itself with areas where it is okay to toilet, and at this stage it is good to move the mad outside to help them adapt.

You can buy puppy pads on Amazon. Here are the ones we used which also have very good Amazon reviews.

Crates are an effective and approved way of toilet training your English Bulldog puppy at the beginning. It helps to avoid mess, helps you keep a closer eye for signs he needs to go and, most crucially, teaches him to hold it until he is let outside to toilet.

You can find a suitably-sized crate on Amazon which work well with the English Bulldog breed.

6. Learn to pick up on the signs

To avoid accidents in the home, it is good to learn to recognise signs that your English Bulldog needs the toilet. Commons signs include:

If your puppy shows any of these signs, take them out to your chosen toileting spot immediately.

However, if accidents do happen, it is best to stay calm and not get angry at your puppy, as this will just make them fearful and cause them stress, which will actually result in more random accidents.

7. Use a phrase they will learn to understand

One of the most important aspects that goes a long with in potty training your English Bulldog puppy to use a phrase they learn to identify with.

With our own puppy, we would say “go pee pee” as soon as we had taken him outdoors or to his puppy pad. By doing so, he would learn to identify the phrase and location with the action.

After using this tactic long enough, whenever you say the magic words of “go pee pee,” your puppy will immediately know what they need to do.

8. Reward the puppy for a good job

When your English Bulldog puppy has finished his pee or poop in the right place, you should give them a reward or positive reinforcement with praise.

By rewarding good behavior you will start a pattern of success which can lead to far faster house breaking and training.

Accidents are going to happen a lot, and whilst this can be frustrating, never shout or scold the puppy.

I remember countless times where I would have just cleaned a pee up from the kitchen floor, only for our puppy to crouch and pee again just seconds later.

Hold your tongue, and don’t react negatively because this can lead to anxiety and fear which will only make them pee or poop more when they aren’t meant to.

When should I start potty training my English Bulldog puppy?

It is generally recommended to start house training your English Bulldog puppy once they are between 12 weeks and 16 weeks old.

This is a good age to start because whilst it means that your puppy is still young enough to learn life-long skills and have their behavior moulded, at this stage your puppy should have enough control over their bladder and bowels to hold it when necessary – making the potty training process easier for them, and cleaner for you!

How long does it take to potty train an English Bulldog puppy?

I won’t sugar coat this at all; it could between 4 and 6 months for your puppy to get fully house trained. There are other factors which come into play though, such as individual temperament and environmental factors.

However, it’s not unheard of for it taking up to a year until an English Bulldog puppy is properly potty trained.

For example, you bring your English Bulldog puppy home once it’s over twelve weeks old, it might be the case that it hasn’t been housetrained by their previous owners, and certain behaviours they’ve picked up need to be unlearned.

Be prepared for accidents, but above all, have some wipes and tissue paper on hand all the time as you will get through a lot of this stuff!

Now you know how we advise you housebreak and English Bulldog puppy, I would love to know how you got on. Get in touch via social media and leave a comment.

Similarly, if you have better ideas on how to potty train an English Bulldog puppy, please share those in the community too.

The bottom line is this; do not underestimate to the work that goes into taking care of a new puppy. They’ll need to learn everything – from where to eat, going for walks and how to interact with people – by scratch, so you need to be prepared to put the work in so as to ensure that this incredibly formative period in your puppy’s life is successful.

Toilet training your puppy might feel a bit difficult at times, but with the right attitude, attentiveness and patience, they will learn this life-long skill.

However, if you have any concerns about their ability to toilet train, always contact a vet or a professional trainer. As unlikely as this is, there are some English Bulldogs who will need expert help.

link to Puppy Growls When Picked Up (+ How to Stop)

Puppies are a bundle of joy, but some will have aggressive tendencies that can worry new owners. One of the more aggressive behaviors is when a puppy growls when picked up. It can happen when they...

While every dog is gorgeous in its own way, there’s just something about dogs with exceptionally soft fur and fluffy coats. If you have ever wondered what dog breeds the softest fur, then I’ve...