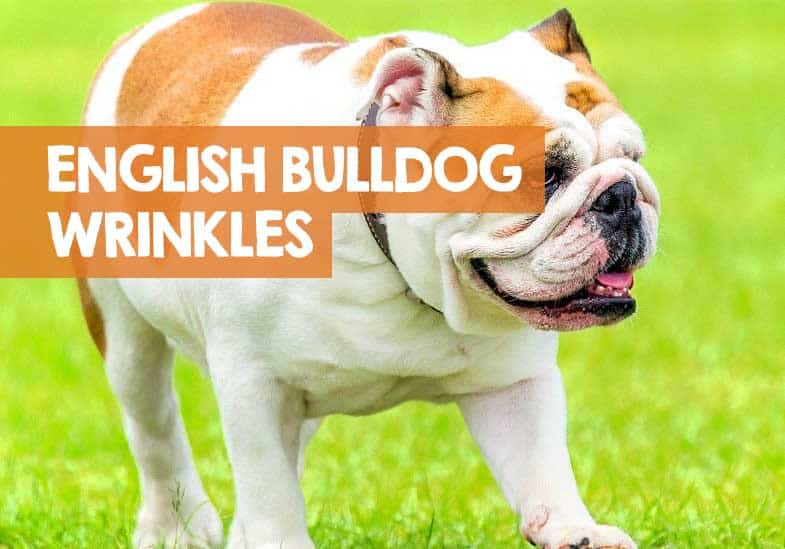 As a breed, Bulldogs are known for their wrinkles, English Bulldogs especially. They can have wrinkles all over their body, but most noticeably around their head and around their abdomen when sat down. But why do they have all these skin folds and wrinkles exactly? Read on for all you need to know…

The history of Bulldog wrinkles

As with many dogs, the reason for certain characteristics and physical features are usually because of what they were originally bred for. These aspects then go on to become more of fashion feature of the breed.

Bulldogs were originally bred as fighting dogs. Just like the similarly wrinkly Shar Pei and English Mastiff breeds, Bulldogs were used for bull baiting and fighting other dogs.

The wrinkles are actually just a lot of loose skin which let the dog to move around freely within the skin and continue to fight even if their opponent had a hold of them.

Bulldogs also have wrinkles on their face as they help to keep the blood out of their eyes. The blood will run down the wrinkles instead.

While bull baiting was banned in England and North America in 1835 under the Cruelty to Animals Act (see Wikipedia), the wrinkles and loose skin have become synonymous with the breed and are now a fashionable feature of the dog.

Because of this, their wrinkles have been bred to become more prominent and pronounced in modern times.

When do English Bulldogs get their wrinkles?

Wrinkles add to their adorable charm, but did you know there’s an actual developmental aspect to how and when the wrinkles appear on a Bulldog? Here’s what you can expect to happen…

When do English Bulldogs get their wrinkles? Bulldogs don’t have wrinkles when born but get wrinkles as they age. At 4 to 5 weeks old, a puppy will begin to put on enough fat under their skin to have some minor wrinkles. They will disappear at around 24 weeks, only becoming wrinkly again between 6 to 12 months.

That’s a very short answer and I imagine you’re probably thinking why the wrinkles appear, then go, then come back again. Take a look at the development timeline below as this will give you the detail about when English Bulldogs get their wrinkles and why this happens.

Like humans, English Bulldogs go through several different stages of development through childhood and teenage phases, where you will begin to see both their physical characteristics and their personality come through.

Here’s a developmental timeline, and I’ve bolded up the parts relating to their wrinkle development.

Do Bulldogs get more wrinkles as they age?

Most Bulldogs will keep the wrinkles they have from 12 months and older for the remainder of their lives. However, some owners have reported that their older Bulldogs have wrinkles that get deeper.

It depends in truth. Some Bulldogs do not get more wrinkles as they get older, some do become wrinklier.

Do Bulldogs grow into their wrinkles?

Yes, they do. You will often see English Bulldogs between 6 and 12 months who have grown their wrinkles, but their body hasn’t filled out completely. You might not see your Bulldog grow into their wrinkles fully until as late as 3 years old.

Bulldogs are naturally wrinkly, meaning that they won’t fill out and become smooth (although certain breeds of bulldog are less wrinkly than others). However, individual dogs do become wrinklier than others as they mature, while others will have far fewer.

One such wrinkle is known as a ‘nose rope’, a wrinkle of skin that sits across the top of the snout, like someone has tied a rope around its head, which is more pronounced on some dogs more than others.

While Bulldog puppies will begin to get their wrinkles at around 4 weeks old, they may lose a lot of them during their ‘gangly’ phase at around 16 weeks. As they continue to develop, however, they may regain some of these wrinkles as they grow bigger and mature, although they will most likely have less than they did as a puppy.

Why do some Bulldogs have more wrinkles than others?

The reason why some Bulldogs have more wrinkles on them than others will be down to a number of factors. This can include their genetics, lineage, what their parents were like, or can be as simple as varying from dog to dog.

Is there such thing as a non-wrinkly English Bulldog?

In short, there isn’t really such a thing as an English Bulldog without wrinkles. Wrinkles are a trait of the Bulldog breed itself, meaning that most Bulldogs have at least some wrinkles, especially around their face.

English bulldogs are especially known for their wrinkles, while other types of Bulldog, such as the French and American Bulldogs, have fewer of them.

The weight of your dog can also affect the number of wrinkles, with overweight dogs having more wrinkles because of the added fat. If you are worried about your dog’s weight, it is best to consult your vet who will be able to tell you what a healthy weight for your dog is and what to do to help them lose it.

If you are not keen on an overly wrinkly Bulldog, do you research to see whether a French or American Bulldog is a better choice for you.

Alternatively, adopt an adult Bulldog from a shelter, as you will be able to see how many wrinkles they have, unlike puppies where you will not be able to tell until they are a fully-grown adult dog.

Do Bulldog wrinkles get infected?

Bulldogs can be prone to wrinkle infections as they grow older, with the flaps of skin being difficult to clean thoroughly meaning that dirt, mites or injuries can lead to unpleasant smells, as well as discomfort and pain for your dog.

If you have noticed redness or unpleasant smells from particular areas around your dog’s wrinkles or have noticed that your dog is rubbing at its face more than normal, either with its paws or on your furniture, your dog may have an infection.

This can be distressing for your dog, becoming a very painful and sensitive area. If you think that your dog has an infection, the best thing to do is to call your vet, who will be able to give you advice and recommended treatments.

To prevent an infection from developing, make sure to spend some time cleaning out the wrinkles when washing your dog, using wipes to get into the folds and also drying them off to prevent moisture from becoming trapped and causing infections itself.

Wiping out your dog’s wrinkles about twice a week is recommended, especially if your dog has been rooting around in the dirt.

If your dog already has an infection, topical wipes can help, as well as dog-friendly topical creams to help soothe and de-inflame the area.

Your vet will be able to prescribe or recommend particular wipes and creams, with some dog owners even making them themselves with home-made recipes.

What do I put on my Bulldog’s wrinkles?

Keeping your English Bulldog’s wrinkles clean can be as easy as giving them a quick wipe with some warm water every few days, as well as remembering to get shampoo into the folds during bath time.

If you have noticed some dirt build up around your dog’s wrinkles, a half water-half shampoo solution and baby wipes will do the trick.

When you are washing your dog be sure to dry out the wrinkles and any other flaps of skin, as trapped moisture can cause infections as well.

However, do not over-dry them as too-dry skin can cause irritation and even promote yeast infections. Keeping the balance is important, but if you are concerned about how to go about this your vet may be able to help give you some advice or instructions about how to clean and dry your dog.

Certain Bulldog breeds have different physical characteristics, including their number of wrinkles, with English Bulldogs being particularly known for them.

I hope I’ve at least given you a decent overview. If you want to know more about this breed, check out the following articles: