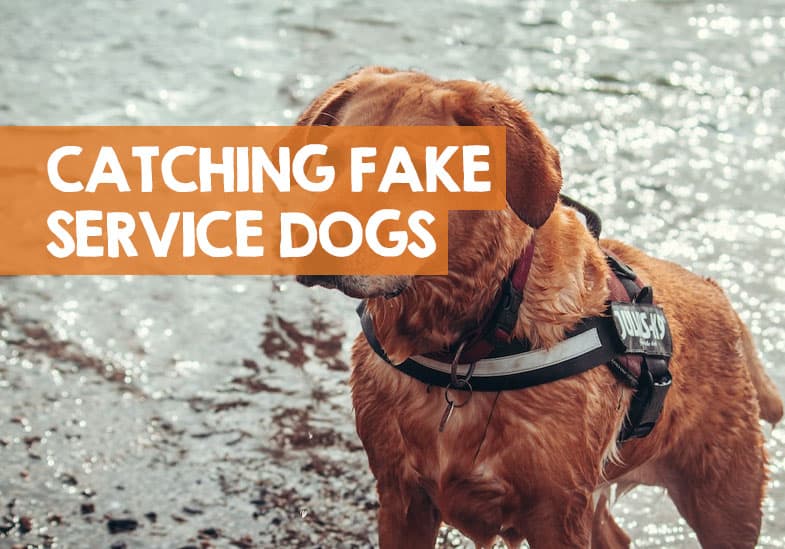 It’s no secret that fake service dogs are all over, with some people taking unfair advantage of the rightful aspects those with legitimate service dogs need. Perhaps you work in a store or public place and want to know whether the service dog in your midst is phony?

Below is a series of tips on how to spot and catch a fake service dog. Here’s a very quick overview first though before the main detail below.

You can catch a fake service dog by watching their behavior. For example, a fake service dog might bark or whine, be easily scared, running up to strangers for treats, possibly riding in a shopping cart, and generally not appearing to have the focus a real service dog would have.

There are several other things that can reveal whether a service dog is fake. Fake service dogs often have no leash, pull away from their owner when leashed, display unruly behaviors in public, and are easily distracted when with their owner, to name a few.

Spotting and catching a fake service dog to report isn’t always that easy though.

Sadly, there is no online registry for service dogs in the United States. This can make it harder to catch the fake service dog and identify any imposters, as there is no quick search that can be done to verify proof.

But the following hints can certainly help give you a better idea.

How to spot a fake service dog

Service dogs are a blessing to those living with disabilities.

Besides providing companionship as every other dog does, service dogs guide their owners, help them pick up dropped items, alert them of any health danger, and perform other acts of service depending on the owner’s disability needs.

These dogs undergo several months (or even years) of rigorous training to gain such advanced skills. But currently, it’s like there’s an outbreak of phony service dogs.

People are taking advantage of the fact that under the Americans with Disabilities Act (ADA), those with disabilities don’t need to walk around with official papers or badges proving they have a legitimate service dog.

Some businesses that have had terrible experiences with pets masquerading as service dogs are even turning away anyone who shows up with one — including the genuine owners.

Nowadays, a non-disabled person only needs to go online, buy an official-looking vest with a label screaming “service dog,” and voila! They can gain entry into any “no pets allowed” restaurant, event, or store with the vest strapped on their regular dog.

Sounds like a clever plan. But dogs can’t pretend.

It doesn’t take long before a fake service dog’s “mask” falls off in public. Here’s how to tell if a service dog is an imposter:

1. Walking freely without a leash or harness

Every legitimate service dog must be on a leash when walking in public with their owner.

As much as these dogs are well-trained, being leashed keeps them strictly focused on their duty (sticking by their owner).

There are a few exceptions, though.

For instance, if being on a leash will make it harder for the service dog to perform their job (like a cardiac alert service dog needs to be carried to feel their owner’s heart rate up close).

But even without a leash, a real service dog won’t act out of control at any point.

You’ll know a service dog is fake if they lack a leash or harness. They may be wearing the typical service dog vest, but that’s it — no leash to allow the handler to control them.

And unlike a real service dog that stays next to the owner even without a leash, a fake one will give their handler a hard time by walking to places where they shouldn’t be.

2. Leash on, but they are pulling away or stopping aimlessly

A legit service dog has a much higher standard of behavior when on a leash. They’ve been fully trained to remain close to their owner and follow their owner’s lead.

They never try to pull away or walk in different directions simply because they’ve spotted something interesting right ahead.

You also won’t see a genuine service dog making unnecessary stops when walking with their owner. But guess who does all these? A fake service dog.

Fakes aren’t highly disciplined when leashed. If you spot a “service dog” acting out of control on a leash, you’re staring at a fake one.

3. Service dog tossed in a shopping cart or oversized bag

There’s a rule that real service dogs adhere to: “all fours on the floor.”

That means they must be always walking with their owner unless the dog can’t perform their job well if they have their feet on the ground.

For instance, an owner with a glucose-alert service dog may need to carry their dog in a chest pack. This will make it easier for the dog to sniff the chemical scents in their owner’s breath.

A fake service dog will be busy enjoying a free ride in a shopping cart despite their vest hailing them as a service dog.

4. They are a public nuisance (and display unwanted potty habits)

Ever encountered a service dog that’s snapping at strangers and other pets in public?

Legit service dogs have been trained to be on their best behavior and not create chaos when out with their owners. They also don’t pee in public spaces.

While it’s not unusual for some dogs to act nervous in public, real service dogs are often fully confident around unfamiliar faces and new situations.

Nothing shakes their confidence or calm demeanor, all thanks to the training they received.

But with fake service dogs, things are different. If they see or hear anything that scares them, they may resist walking or do stuff like hiding behind their handler.

6. Can’t say no to temptations

You will never see a real service dog begging for food from their owner at the restaurant or going to other people’s tables. They’ve been trained to know that focusing on food when working is a no-no.

The same can’t be said about a fake service dog. They will constantly beg for their owner’s food and even try to grab food from other tables.

When they sniff an interesting scent on the ground, all their focus will be on investigating the strange smell. Fake service dogs are often busy sniffing around, a sign that they’ve shifted their attention away from their owner.

The genuine ones never turn into notorious sniffers when walking with their owners since they’ve been trained to stay focused.

8. People are petting them

A legit service dog isn’t supposed to be petted by strangers in public — no matter how gorgeous they look. Petting distracts them from looking out for their owner.

Their owner will turn down requests from strangers interested in petting the dog. So if you see a service dog being petted by any friendly stranger, that’s a fake.

Reporting a fake service dog: Is it possible?

Fake service dogs are a disrespect to the disabled community. Several states consider masquerading a regular pet as a service dog a punishable offense. That means you can report someone who has a fake dog.

In California, for instance, the law says that a fake service dog owner risks serving six months of jail time or a fine of up to $1,000.

You can reach out to your local police via a non-emergency number. Or check out the ADA website and call them using the contact details provided.

Can you ask for proof of a service dog in Florida?

The short answer is no. According to the ADA act, you shouldn’t ask anyone with a service dog to produce documentation as proof.

Why do people dye their service dogs?

Most people do this to protect their legit service dogs from theft. Dye gives the dog a unique appearance that can ward off those with malicious intent.

How do I report a false service dog in California?

As mentioned earlier, you can make a non-emergency call to your local police or call the number on the ADA website.

Real service dogs are amazing; the way that they can be trained to provide essential services while keeping their handler company at the same time. Service dogs are an invaluable asset that makes thousands of American lives easier.

I think it’s outrageous so if you can catch a fake service dog, you’re doing us all a favor.