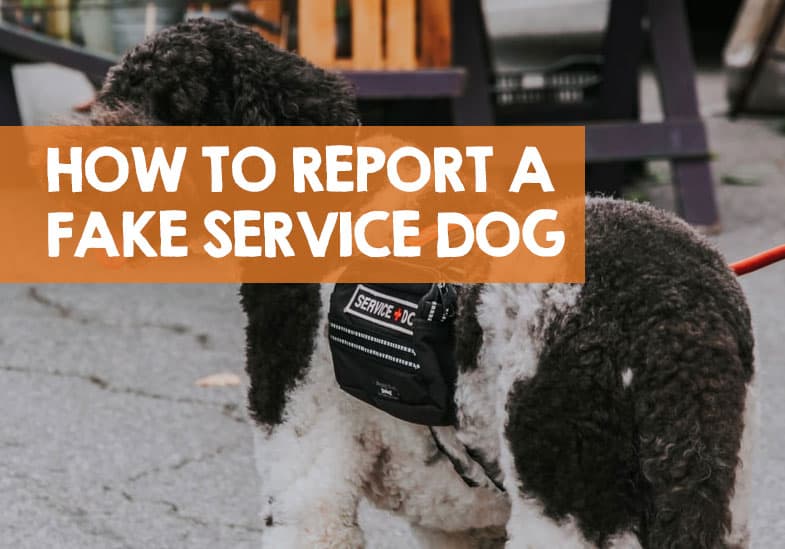 In recent years there has been an unfortunate trend of people trying to pass their dogs off as being service dogs. They do this in order to take advantage of benefits that people who genuinely need help would get.

Not only is it completely unethical, but it can also cause problems for genuine owners who don’t have a fake service dog.

If you have spotted a fake service dog, I would implore you to report it, and here’s how you do it.

You can report fake services dogs on the ADA website on a link I’ve left further down the page.

Alternatively, if you do catch a fake service dog in action, please call and report it to your local police department using the non-emergency line. They will then investigate the individual and decide whether or not your claim is accurate.

Why do people have fake service dogs?

People create fake service dogs mainly to ensure that the dog can accompany them inside stores and restaurants, even though they are not trained service animals.

This usually happens simply because the owner does not want to be separated from their pet, or because they do not have a source for pet-care. It is also done so that the owners can avoid paying additional fees for bringing their pets with them when they travel.

An owner might also do this when they are moving into a new home that is not pet-friendly. To get around the pet restriction, they may claim that they have a service animal. The building owner will be legally obligated to allow the pet into the home.

If this is not a real service dog, this can cause issues with noise complainants, destroying property, or making messes.

Why fake service dogs are a problem

Some people may not believe that it is a big deal to put a vest on their dog and claim that they are a service animal. However, this is causing plenty of issues, particularly among handlers who use legitimate service dogs for their day to day lives to assist them with their disability.

There are a number of reasons why fake service dogs are a problem.

For example, when a person with a disability is in a store with their service dog, the dog is trained to be quiet, calm, and respectful. They have also been trained to ignore other dogs.

This is also causing businesses to be leerier about having dogs of any kind in their building, which can put a strain on the handler who has to bring out their paperwork and explain that the animal is essential to them.

If you see this happening and catch a fake service dog, please make sure when you spot it, you report it as described earlier.

How to catch a fake service dog

Spotting and catching a fake service dog to report isn’t always that simple.

There is no online registry for service dogs in the United States. This can make it difficult to catch the service dog and identify the imposters, as there is no quick search that can be done to verify the animal’s legitimacy.

If you are not familiar with how real service dogs act, it can be a little difficult to recognize an imposter. However, once you know how to recognize the signs, catching a fake service dog will come more naturally to you.

Some of the signs to spot a fake service dog include:

Once you think you have spotted a fake service dog, you have a couple of different options regarding reporting it. You could try calling the non-emergency number for your local police department and tell them what you have observed.

They will attempt to locate and question the owner of the possible fake service dog to see if your assumptions are correct.

Another method of reporting a fake service dog is to report them directly to the ADA. As mentioned above, there is a section on their website with phone numbers to report service dog violations.

Provide them all the information that you have, and a representative of the ADA will take over the case from there. After that, you can rest assured that you have done your part to reduce the number of fake service dogs in your city.

Can you get in trouble for having a fake service dog?

People can get in a lot of trouble for having a fake service dog. Many states have passed laws that make it illegal to fake having a service dog. The penalties vary depending on where the infraction took place.

In California, the punishment for falsely claiming to have a service dog or be a trainer includes a fine of up to $1,000 and up to six months in jail.

New Jersey has fines of up to $500 for unnecessarily using a service dog vest or harness.

In Texas, someone could be issued a misdemeanour and be fined up to $300 and up to 30 hours of community service.

What states is it illegal to have a fake service dog?

31 states currently have a ban on service animal fraud. These include:

There are an additional 5 states that have laws that criminalize animal fraud. These include:

Can you legally ask for proof of a service dog?

You might want to try catching a fake service dog by asking for proof. However, you are not legally allowed to ask for proof relating to a service dog. By doing so, you could be considered to be discriminative against people with disabilities. The reason why they have a service dog should be allowed to remain private.

This is one reason why it’s so hard to prove and catch a fake service dog.

If a service animal is not allowed into a building simply because the owner will not show the paperwork, the business violates the ADA and can be reported. The only legal reason why a service dog can be asked to leave the premises is if it is not housebroken, or if it is misbehaving and the owner cannot control it.

However, these two situations are unlikely to ever occur with a properly trained service dog.

As per the ADA, the only thing that you are legally allowed to ask are the following two questions:

These questions can only be asked if the reason for the service dog is not visually obvious, e.g., if the owner is in a wheelchair.

I have always loved the idea of service dogs; the way that they can be trained to provide essential services while keeping their handler company at the same time. Service dogs are an invaluable asset that makes thousands of American lives easier.

People will occasionally purchase a fake service dog vest and put it on their pet when they go out. This is what is known as impersonating a service dog, and it is a very serious crime.

There is no real reason for them to have this dog with them, they are simply doing it for their convenience.

If you do spot a fake service dog, please do your duty and report it as soon as you can.

Here are some related guides to do with service and guide dogs.