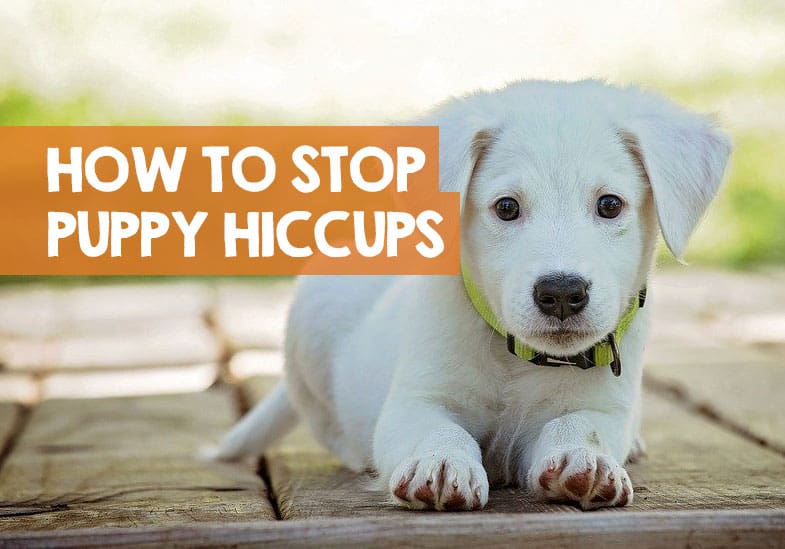 Puppies get hiccups just like us, and in the same way that they can be really annoying for humans, they’ll also be distracting for them too. These involuntary spasms of the diaphragm usually stop on their own after a few minutes, but there are things that we can do to help get rid of puppy hiccups. Here’s what you need to do…

How to get rid of puppy hiccups? You can stop puppy hiccups by getting them to eat and drink slower and calming them down. You can then get rid of any further hiccups by laying your puppy on their back and rubbing their belly gently and slowly.

As with any physical issue, if the puppy hiccups do not stop, and continue for more than a few hours, then do get in touch with your vet for further advice.

How to stop your puppy’s hiccups

So, what can you do to help your pup’s hiccups to stop? Here are our three top tips to help speed along their disappearance:

For dogs and puppies who regularly get hiccups, your vet might prescribe a special, low grain food that can help some dogs.

But, most of the time, one of the three tips above will help to get rid of puppy hiccups.

Why does my puppy hiccup?

Believe it or not, scientists still aren’t entirely sure why we hiccup! It is something that affects all mammals, and one school of thought is that it’s a left-over response from an earlier stage of evolution.

Another theory is that hiccups happen in the womb as the fetus is trying out the muscles associated with breathing before entering the big wide world and that hiccup ability never stops even once born.

Puppy hiccups are often caused when they eat their food too quickly, and that then causes irritation in the stomach.

This can also happen when they eat something that they really shouldn’t!  Your youngster getting over-excited or being a little stressed can also bring on a case of hiccups.

Puppy hiccups can also happen when the diaphragm spasms.  This thin skeletal muscle sits right at the base of the chest, and it separates the stomach from the chest cavity. As your puppy breaths in, it contracts and pulls air into the lungs.

When they exhale, it flattens back out again and pushes the air out of the lungs.

So, when the diaphragm spasms, it causes the opening between your puppy’s vocal cords to close. This then means that the inflow of air is stopped, and it creates the ‘hiccup’ sound.

Well, just like in people, you’re likely to hear that distinctive hiccup sound and feel or see the diaphragm spasm.  Some puppies also get a case of the burps at the same time, and at times you might just see the spasm and not hear anything at all.

Sometimes what can sound a bit like a hiccup isn’t one at all. Instead, it might be what’s called a reverse sneeze or, more seriously, your puppy is having a seizure.

So that means that if your puppy has been hiccupping for more than a few hours, you should get in touch with your vet to ensure that it’s nothing more serious.

This is especially important if they also don’t have much energy, have a temperature, or lose their appetite.

How to get your puppy to slow down his or her eating?

Puppy hiccups can happen when your puppy is eating too fast. To prevent or get rid of puppy hiccups, stopping this once problem will often cure hiccups.

Now while it’s great that your youngster has a healthy appetite, eating too quickly can cause a range of problems in addition to those hiccups, and these can include choking, gagging, and vomiting.

When your puppy gulps down their food, it’s also possible that it can lead to a deadly condition called bloat. This causes your pup’s stomach to fill with air, liquid, or food and creates pressure on their other organs.

This, in turn, makes it much harder for your puppy to breathe, and it can mean that the blood flow to the heart becomes blocked.

While bloat tends to affect large, deep-chested dogs such as Dobermans, it can happen in any breed.

So, to slow down your puppy’s eating, you can:

What not to do to get rid of puppy hiccups

There are many old wife’s tales about how to stop hiccups, but there’s one in particular which is essential not to use with your puppy, and that’s to frighten them.

When this is done this to a person, they understand why it was done, and everyone can laugh about it afterward.

For your pup, it’s likely to be pretty frightening and may well cause them to be anxious when you’re around. After all, they will have no idea why you suddenly decided to scare them.

Another one not recommended is to pull your puppy’s tongue to stop the hiccups. Again, it’s just likely to frighten them and cause them to be very suspicious next time you need to check their mouth or teeth.

Finally, feeding your puppy a spoonful of sugar is sometimes recommended. But there really is no science to support this, and as well as it having very little nutritional value, it may also cause an upset stomach.

Puppies have the strangest of quirks, and just like human babies get hiccups and all sorts. Below you can see some other little things you might not have known.