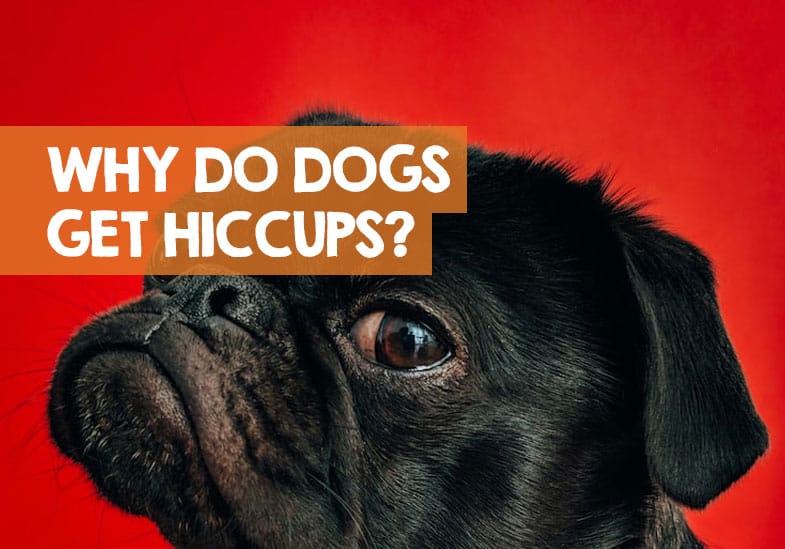 Dogs share some similar traits with humans, and this can include annoying hiccups. Sometimes it can be funny to see your dog hiccup once or twice, but when it persists, you’re right to be concerned.

In this guide I will explain what triggers hiccups in dogs, when you should be worried, and how to get rid and stop them. First though, here’s a quick lowdown on why dogs get hiccups often.

There are several theories as to why dogs get hiccups  including over-feeding, eating or drinking too fast within a short time, due to being cold, overexcitement, stress, and conditions such as acid reflux.

Most of the time your dog’s hiccups will pass on their own accord. However, it could become problematic and point to a more significant issue. Read on to find out if you should be worried if your dog has hiccups           and how to get rid of them – plus why it happens when they are sleeping!

We’ve all experienced our fair share of hiccups. And almost always, all we think about at that “hic-hic” moment is how to make them disappear.

But when your dog has hiccups so often, a lot might go through your mind such as whether they are sick, should you call a vet, will your dog be ok, what’s triggered the hiccups, and so on.

If you freak out when your dog hiccups (I see you, new dog parents!), here’s something to ease your worries: Hiccupping is completely normal in dogs.

Most dog parents find it cute and might even video it. There are countless videos online of dogs having the hiccup spell, so if your dog often gets hiccups, no need to panic. It’s something all dogs experience.

However, sometimes (though rarely), a dog hiccupping may signal a health problem. I’ll get to this in a bit.

Although there isn’t any scientific evidence on the subject, experts agree that hiccupping in dogs happens the same way as in humans. Plus, the triggers of hiccups in dogs aren’t any different from those that cause human hiccups.

I can almost hear you thinking, “why do dogs get hiccups so much?”

Well, it all starts from the diaphragm, a large, dome-shaped muscle that sits between your dog’s chest and abdominal cavity. Organs like the stomach are found in this cavity.

Normally, your dog’s diaphragm contracts when they breathe in and relaxes when they exhale.

But when there’s any irritation or disturbance to the diaphragm, this will interrupt the normal pace of the diaphragm’s movements, causing quick, involuntary contractions.

These contractions abruptly close a dog’s glottis (an airway opening in their vocal cords). The hiccup sound you hear results from the glottis shutting suddenly with each contraction.

A dog’s hiccup doesn’t sound like the classic human “hic.” Hiccupping in dogs often comes off as a subtle gulp. You will also see your dog’s body jerk with every as seen on this YouTube video.

Why do dogs get hiccups often?

1. Dog hiccups due to eating too much

Anytime your dog overeats, their tummy stretches beyond its usual size and presses on the diaphragm. This can cause sudden contractions that trigger the hiccups.

If your dog is hiccupping so much because of an overeating episode, the hiccups will disappear once the food digests and their stomach size is back to normal.

This may take a while, especially if your dog decides to lie down because they feel sluggish after overfeeding. Their posture will delay the food movement from the stomach to the intestines (to allow the next step of digestion).

So, until their tummy shrinks, you may hear them hiccupping even while having their nap. They’ll be fine eventually, though.

2. Dog hiccups due to eating or drinking too fast

Raise your hand if your canine friend scarfs down food like it’s their last meal. Many dogs are guilty of this, and hiccupping is the “reward” they get for not enjoying their food slowly.

Every time your dog eats super-fast, they take in more air into their tummy.

You can already guess what will happen next, yep, their stomach expanding because of the excess air. The sudden pressure on the diaphragm can result in a bout of hiccups.

3. Dog hiccups due to excitement galore

Anyone raising a puppy will tell you that hiccups are part of their dog’s everyday life.

Unlike adult dogs, puppies are also are prone to hiccups because they are ever vigorous when it comes to everything. This includes eating, lapping up their bowl of water, playing, and everything in between.

That means puppies tend to swallow more air as they engage in everyday habits. Luckily, the hiccupping will decrease as your puppy enters adulthood (since they’ll be calmer).

Handy Hint: This is just one reason why I don’t recommend you leave water out all the time for your puppy. Find out what I recommend here.

4. Dog hiccups due to fatigue or stress

It’s also widely believed that dogs experiencing stress or fatigue tend to hiccup more than chilled-out dogs. This might be because when a dog is exhausted or feeling anxious, their breathing rhythm changes.

They may breathe in faster than normal (experts call it hyperventilating), and some of the air will make its way to their tummy rather than into their lungs.

5. Dog hiccups due to swallowing something foreign, like hair

When your dog ingests an irritant, for instance, a bit of fur when self-grooming, then the hair can irritate the nerves in the diaphragm, stimulating unnecessary contractions and eventually hiccups.

Handy Hint: If your dog has swallowed a foreign object, it could take 10 to 24 hours to pass. Here’s what to check for and whether to call a vet.

6. Dog hiccups due to a sudden change in temperature

It’s also common for dogs to develop hiccups when it gets too cold. Breathing in cold air can tingle the diaphragm nerves involved in contractions, causing a hiccupping episode.

You can mitigate for this by making sure the dog is warmer in cold weather.

If your dog suffers from acid reflux, the irritation in the esophagus may lead to spasms in the diaphragm. That’s because their esophagus goes through the diaphragm (and connects with the stomach).

The acid movement from their stomach to the esophagus may disturb the diaphragm, leading to hiccups.

Why do dogs get hiccups when sleeping?

Puppies and dogs will often get hiccups when sleeping at night, and for all the reasons I’ve listed above including eating too fast and fatigue.

Think of how a puppy behaves. They will have a manic episode, wolf down their food, then collapse in tiredness and sleep it off… only for the hiccups to come on as they sleep at night or day!

When you should be worried if a dog has hiccups

Most bouts of dog hiccups often go away after a few minutes. At times, they may last a few hours (but occur in intervals, not not-stop).

You should be worried if the hiccupping persists for days and your dog seems distressed, there might be a deeper problem that requires veterinary attention.

Your dog’s hiccups shouldn’t affect their quality of life. It’s worth seeing your vet if you notice that the recurring hiccupping also comes with symptoms such as:

How do you get rid of hiccups for dogs?

Most of us find hiccups uncomfortable, so it’s normal to assume the discomfort applies to our dogs that hiccup so much.

There are a few steps you can take to relieve your dog’s hiccups and minimize frequent hiccupping in the future, here how you can get rid of them (in puppies too).

It’s perfectly normal for dogs to develop hiccups. You should only be worried and see the vet if the hiccupping comes with other signs like vomiting or shortness of breath.

Most times, you don’t have to do anything since the hiccups often disappear on their own. But you can gently massage your dog’s belly or chest area or let them sip some water.

Also, consider serving them smaller portions and getting them a slow feeder bowl to minimize feeding-related hiccupping.