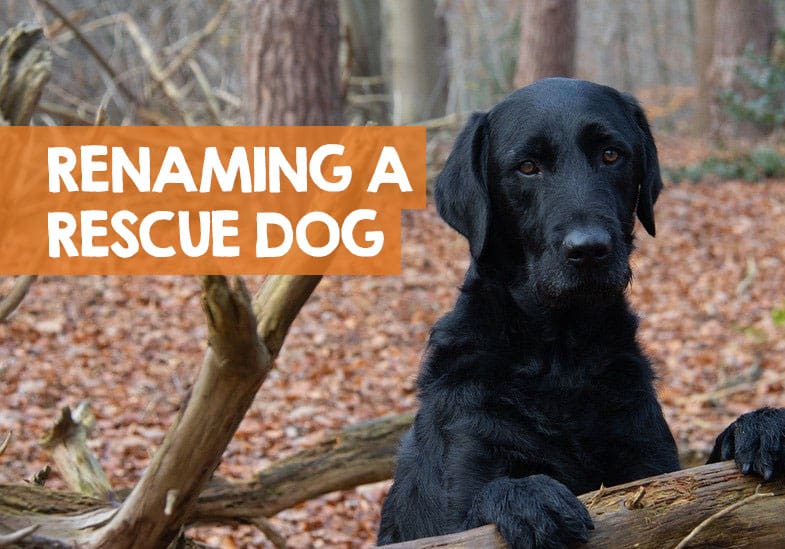 Bringing a new dog home can result in a lot of changes for both you and the animal. This is especially true in the case of rescue dogs. Adopting a rescue dog is incredibly rewarding, as you are giving them a second chance at having a good life.

However, it is important to remember that they are coming home with their fair share of trauma that you will need to keep in mind… some of which could related to connotations they have in their old name.

If someone has mistreated the dog in the past, you should change the name. It will give them a fresh start, and possibly help to remove the fear they had associated to what they used to be called.

When deciding whether it’s okay to rename your rescue dog, remember that dogs respond better to name changes when they are two years old and under.

Renaming a rescue or shelter dog

If you are not sure if you should rename your rescue dog in your particular situation, we might have the answer for you below.

Find out the dog’s history

The first thing you should do is investigate your dog’s history. If they were left at a shelter, the employees may have some kind of background knowledge that can help you.

For instance, they may be able to tell you why the dog got surrendered, and whether or not they were mistreated in the past. They may also know the name that the dog has been called up until this point.

It is quite likely that the shelter or foster home does not know the former name of the dog. This could happen if the dog was abandoned, or if someone just dropped them off without an explanation. Make sure this is one of the questions you ask the shelter though (here are more questions to ask when adopting a dog).

In this case, the dog may have been given a temporary name, and it is okay to change your rescue dog’s name. This is because the shelter dog probably was never aware of the name change and hadn’t had enough time to get used to it.

Assuming that the rescue dog was treated with kindness in the past, you might want to consider keeping their name. They are used to it, and a new name might cause unnecessary additional stress for them. They will also be easier to train if they already know which name to respond to.

If you discover that the dog was mistreated in the past, this will be a good opportunity to help them get a fresh start. Hearing their old name may remind them of the hurt that they had suffered, so you will want to change your rescue dog’s name.

Hopefully they can then start to associate their new name with good memories and the loving care that you provide as you bond with the dog. You can slowly get the dog used to the change by adding the new name to the old one.

This will get them accustomed to the sounds. For instance, if the old name was Bozzo, and the new one is Bear, you can call the dog Bozzo-Bear for the first week or so. After that, the transition to Bear will be a lot easier.

How old is the dog?

Your rescue dog’s age will also be a good consideration as to whether you should change their name or not. If the dog is under two years of age, you will have an easier time changing their name, as they have not had as much time to get used to the old one.

They will quickly become used to the sound of your voice and will then respond to the new name.

If they are older than two years, you will need to have a bit of patience during the transition to a new name. To change an older rescue dog’s name, start using the new one as soon as you bring them home.

Expect to spend at least a few weeks teaching them to respond to the new name.

As a rule of thumb, a dog’s name should only be spoken with good associations attached to it. For instance, I would say “Rex, good dog”, followed by a pet. This helps teach the dog that they should be happy to hear their name be called.

Avoid saying things such as “Rex, no!” or else they will become confused and unhappy to hear their name. This general rule applies no matter how old the dog is.

What to name your rescue dog?

After you have decided that you would like to rename your rescue dog, the next question is related to which name you should pick. Starting fresh means that the name should not sound at all like their old one. This could confuse the dog when they hear similar sounds, and they may not respond to you or do so begrudgingly.

Take a lot of time to decide if you like the name. Changing a dog’s name once or twice in their lifetime is okay but doing it more often than that can cause confusion.

Spend a day or two saying the name out loud to yourself and others. See if you like the sound of it before you commit.

Another thing to avoid is choosing a name that sounds like a command. If a dog has the name of Bae, for example, and you are teaching them the ‘stay’ command, it can be difficult to differentiate the syllables. The dog may think that you are calling for them to come over to you, rather than to stay.

Finally, do not make the name too complicated. Dogs respond best to simple names, so stick to one or two syllables.

Two syllables are generally preferred, as one may be too short to recognize. Having any more than that can become a mouthful anyway, and you may get tired of it quicker.

What to do when your dog won’t respond to a new name?

It can become frustrating if your rescue dog still will not respond to its new name after several weeks have passed. However, don’t give up, as this is a very baffling period for them, and they might simply be feeling overwhelmed.

There are various training methods that you and the dog can work through together – I have listed a few here.

To teach them to respond, stock up on treats. Also, wait until the house is quiet, and ideally, you and the dog are alone. This will reduce the number of distractions for them.

To start the teaching, wait until the dog is nearby, but looking away. At this point, say the new name in a cheerful, clear voice.

When the dog turns to look at you, or comes closer, reward them with a treat. This will give them good associations with the name.

Follow this process for 10 minutes per day, and then re-evaluate if they are responding any better after a week.

As your rescue dog progresses with its training, you can increase the difficulty. Perform the same process when there are other people in the house making noise. When they have mastered this, take the dog outside and try there.

The final step would be going to a dog park and having them come when you call. As you are training, you can gradually reduce the number of treats you are giving out.

At the end of the training, the dog should respond to its name 100% of the time, even if there is no treat in sight.

I’ve never owned a rescue dog but do have plenty of friends who have adopted from shelters. In some cases, they have even gone abroad to rescue a dog from the streets of a foreign country.

In every single case, they have changed the name of their rescue dog.

Training was challenging for all of them, but months down the line, they now have a happy rescue dog with a new name.