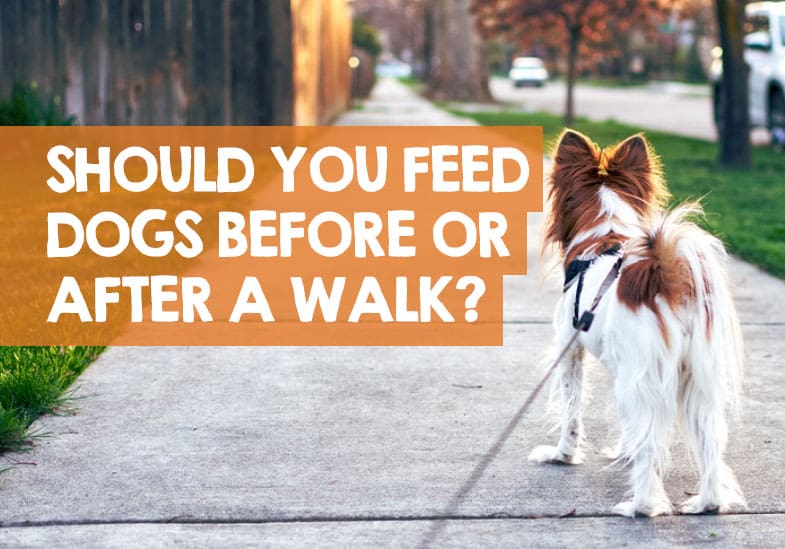 One of the lesser known tips about dog exercise relates to feeding time. The time when you feed your dog can have a very significant effect on their health, particularly with larger breeds. If you aren’t aware of the risks of feeding your dog right before or after a walk, then please read on as it could save your dog’s life.

Should I feed the dog before or after a walk? You should not walk your dog immediately before or after a meal as it can lead to canine bloat, or gastric dilatation-volvulus (GDV). This potentially fatal condition is more common in larger dogs and means avoiding large amounts of food in the hour before and after any exercise.

In simple terms; you can feed your dog before or after a walk, but you should make sure that enough time has either passed after the exercise, or there’s enough of a gap before the exercise starts.

As a general rule of thumb, experts say you should not feed your dog in the hour preceding exercise, or the hour after the walk. Some dog owners either say you should leave a two-hour gap either side of a meal, but this is possibly conservative and, in many cases, impractical.

If in any doubt, please ask your vet for advice.

Should I feed my dog before or after morning walk?

Based on what we know, you can feed your dog before or after a morning walk providing you leave an hour’s gap either side of exercise. If you plan to walk your dog at 8am, feed him either at 7am or 60 minutes after you return.

This can help to reduce the risk of canine bloat, also known as gastric dilatation-volvulus (GDV).

What is canine bloat?

Canine bloat or GDV is ranked as the primary cause of death in many large and giant dog breeds. If not treated quickly it can be fatal. In most cases, GDV is reported as happening 2 or 3 hours after the dog has eaten a large meal.

Exercise and walking can also be a factor in GDV. Research has found that large dogs who exercised in a 60-minute window before and after a walk more predisposed to suffering with bloat.

It occurs when the dog suffers a gastric dilation resulting in gas building up, filling the stomach which can then twist and cut-off blood supply to the gut. It is extremely painful and can lead to death in just a couple of hours.

Handy Hint: Most adult dogs require regular feeding of twice a day. Here’s why I think it’s cruel to only feed a dog once during the day.

Is it best to feed a dog before or after exercise?

This opinion is shared by experts in the veterinary profession. One such example is Dr. Susan Nelson, clinical professor at Kansas State University. In 2009 she was quoted as saying the following about feeding dogs before or after exercise.

“Don’t feed your dog right before or right after intense exercise. This may predispose the dog’s stomach to bloat or twist, especially for large breed or deep-chested dogs. A general rule of thumb is to not feed dogs an hour before or after exercising.”

Dogs with deep and narrow chests are more at risk

It’s interesting what she says here about larger breeds and dogs with deep chests, as this is also referenced by the Blue Cross animal charity in the UK. On their fact file about bloating in dogs, they explain the following:

“Any dog can suffer bloat but larger breeds with deep chests, such as Great Danes, St Bernards, Weimaraners, German Shepherds and Labradors are particularly susceptible. In breeds at risk a preventative gastropexy is sometimes recommended at a young age.”

Dogs breeds most at risk of bloat when exercising near feeding

There has been a study into bloat relating to exercising near mealtimes, and the findings back up what the Blue Cross say about certain dog breeds.

The breeds most at risk, and those you should avoid feeding right before or after a walk include:

In fact, the Great Dane breed was found to be 42.4% likely to suffer bloat in their lifetime (see source) so you need to be especially careful if you own this dog).

If you can visualize what all of these dogs look like, they all have very similar chest shapes which are narrow and deep.

It’s worth mentioning that it’s not just these breeds that can suffer from twisting and bloating. Any dog can get ill because of it; even smaller breeds like Chihuahuas.

Age is also a factor

The age of your dog also plays a huge part in how close you should feed your dog before or after a walk or general exercise. The study found that the risk of bloating increased 20% year on year after a dog reaches 5 years of age in large dog breeds.

The risk is even more with giant dog breeds, with the chance of bloat increase by 20% each year once the dog reaches the age of 3.

The study also found that the offspring of dogs who have had bloat are more at risk too, with a 63% higher chance of developing the condition.

Handy Hint: You might also want to know how long it will be before your dog poops once he has eaten a meal.

Temperament can also be a factor

Another finding from the study related to the temperament of the dog. Dogs that have behavioral problems such as aggression, fear, nerves, or stress are far more likely to suffer with bloat.

The question of do you feed your dog before or after a walk could might not be particularly relevant here. The only aspect I can see it playing into if your dog has been scared whilst out walking and then returns and starts eating quicker due to the anxiety and nerves.

Quick eating is one of the biggest factors that leads to bloat, and it can happen when a dog eats soon after exercise; here’s why below.

Type of food can also be a factor

The study also made a correlation between what the dog eats and how likely they are to suffer with bloat. This is important, as it could dictate what you feed your dog before or after exercise or a walk.

The researchers found that:

“Several diet-related factors were associated with a higher incidence of bloat. These include feeding only dry food or feeding a single large daily meal. Dogs fed dry foods containing fat among the first four ingredients had a 170 percent higher risk for developing bloat.”

The risks of bloat were lowered when the researchers mixed canned wet food into dry food or fed the dog dry food that had rendered meat-and-bone in it.

Another dietary aspect is where dogs that eat only one large meal a day are more prone. Dogs that ate two or meals a day were less at risk of developing GDV.

How eating fast after exercise can lead to bloat

One of the more interesting factors from the study that ties in very closely to whether you should feed your dog before or after a walk is how eating speed becomes a factor. The researchers found that dogs who eat quicker are 15% more likely to get bloat.

This is probably due to them taking more air in as they eat. We should assume that dogs are more likely to take in more air as they eat after exercise, as they might be gulping for breath as they eat.

Based on this piece of the research, you could conclude that it’s best to feed a dog before exercise, providing you follow the hour (or two hour) rule.

Symptoms of canine bloat or GDV

If you do suspect your dog has bloat, you have to call a vet immediately. If not treated quickly, it can be fatal. According to the Blue Cross you need to look out for the following symptoms:

Disclaimer: You should always seek a professional opinion from your own vet as the notes on this page are a result of my own online research and opinion.

Here are some more blog posts I have written about dogs and why they do the things they do when out on walks.