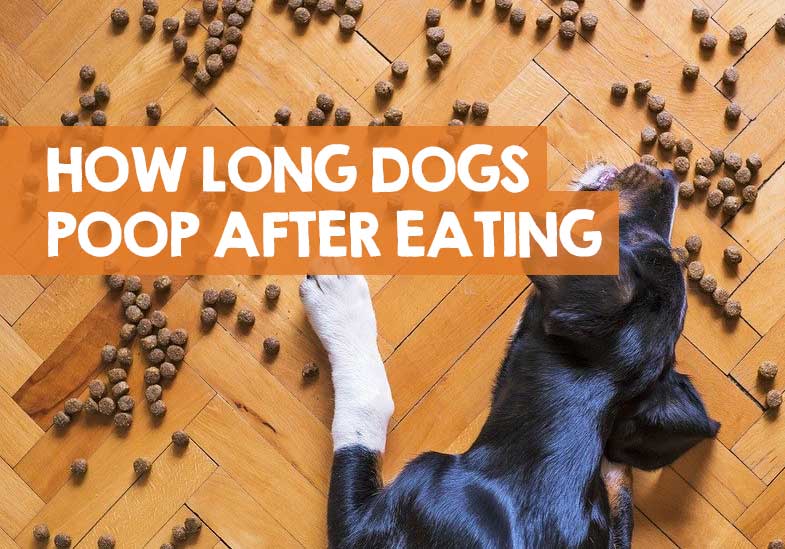 If your family includes a canine companion, having this knowledge is essential in planning day to day routine. For example, it might be that you’ve been called away from the house unexpectedly and your dog is at home alone. It could be that your crate training a puppy.

Whatever the reason, knowing how long after eating dogs do a poop is something that all owners will need at some point.

So, if you want to make sure there’s enough time for your dog to poop after eating before you go to work or bed, here’s the short answer following by further detail.

How long after eating does a dog poop? Food tends to take between 6 and 8 hours to pass through a dog’s digestive system. That means dogs needs around 7 hours after eating for a poop. However, with puppies that time is much less, potentially 4 hours.

So, yes, whilst dogs do poop after every meal, it might be hours before they do. A poop they do after a meal, could actually be food they ate at the previous meal, rather than the one just eaten… and this is why it complicates things and isn’t that simple.

For example, if your dog eats two meals a day; 0700 and 1700, and also has some snacks during the day, he could poop after the 1700 meal – and it won’t be the food from that meal, but a combination of things eaten during the day.

Handy Hint: Did you know that it’s quite important health-wise whether you walk your dog before or after eating?

How long does it take for a dog to digest food and poop it out?

The type of food and its ingredients will have a big effect on how long after eating your dog will poop. Wet food is much quicker to pass through your dog’s digestive system than dry food because of the high-water content.

Most tinned dog food contains around 75% water. Now that doesn’t mean to say that the manufacturers add 75% water to 25% ingredients, rather that the ingredients themselves contain an average of 75% water.

Muscle meat, which is the most common meat used in dog food, is highly nutritious and contains 75% moisture. If you need to know how a food might affect the time it takes for your dog to poop after eating it, check out the nutritional information on the can to see how much moisture it contains.

Digestibility is a way of being able to measure the nutrients that dogs can absorb from the food they are eating. That then means that a highly digestible food results in less waste because your dog needs to eat less to have all their nutritional needs met.

In comparison, your dog will need to eat more foods with lower digestibility, resulting in the need to poop more often after a meal.

Two of the most popular protein sources used in dog food have high digestibility levels, so that’s chicken (80.2%) and fish (87%). Lamb, meanwhile, which is not so common in our dog’s food, is down at 71.5%.

Large amounts of grain in a dog food will also take longer to digest compared to foods that are full of protein. Again, you’ll find out your dog’s food composition by checking out the information on the bag or label.

Ingredients are listed by order of their volume in the food. So, when you see wholegrain cereals as number one on the list, then you’ll know that food is likely to take longer to digest – and therefore, long after eating to do a poop.

Do dogs poop after every meal?

Most dogs will need to poop after every meal, with healthy adult dogs needing to go one to three times a day, and puppies much more frequently.

There is some significant variation from dog to dog in what is considered a regular schedule for pooping. The important thing to watch out for is in ensuring that your dog’s pooping routine is consistent from day to day.

If there are any major changes in how often they need to go, then that could be a sign that something is wrong, and a visit to the vet is required.

Some of the factors which can affect how often your dog needs to poop other than the food they eat are:

Do dogs need to poop after a walk?

While daily exercise is essential for your dog’s overall health and well-being, it also affects their digestive processes. Running around speeds up your dog’s breathing and heart rate. This, in turn, helps to stimulate the natural squeezing (or contractions) of the muscles in their intestines. Intestinal muscles that squeeze better will help to move out the poop more quickly.

How long can dogs hold their poop and pee?

There is no set rule here, as every dog has its own pooping schedule. Some dogs may only go once a day, and they are perfectly healthy; others may need to go four or five times a day and be equally fit and well.

Pooping just once a day can result from the type of food they’re being fed, a reduction in exercise, or when dogs are fed once a day. As long as your dog is pooping at least once in 24 hours, then there’s generally nothing to worry about.

Puppies, meanwhile, will need to go poop as soon as they have eaten. So be ready to scoop them up and take them outside after meals to prevent any accidents inside the home.

For more information on how long they can hold poop and pee, read this guide.

Just because a dog can go as long as 7 hours after eating to poop, it doesn’t mean they dog won’t poop soon after the latest meal… because that poop you see will be digested from a previous meal.

They can hold it for up to 8 hours though, so hopefully you won’t come home to any accidents!