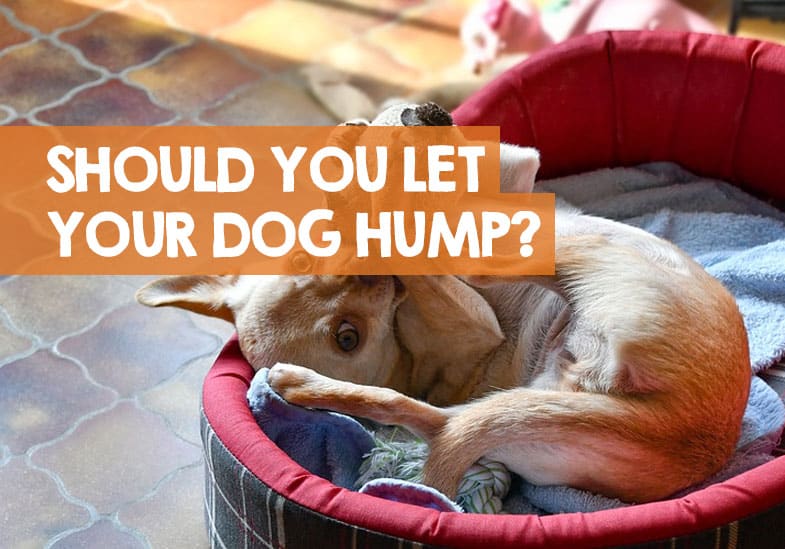 OK, so today’s article is a little humorous in places, but there are some real issues that can become problematic… it’s all about dog humping their toys and pillows. Have you seen your dog do this?

Thankfully our dog isn’t a humper, I assume due to being spayed when he was younger, but it’s very common.

For example, I recently visited a friend who keeps dachshunds. The youngest is Sarge. He’s 9 months old and lives up to his name by managing all the large dogs in the household.

During my visit he focused all his attention on me, which I gleefully reciprocated. After about ten minutes of playful interaction, he firmly attached himself, with intent, to my right arm – yep, he wanted to hump.

My friend detached him and calmly set him on the floor. He resumed his pursuit of me but returned to more playful body language.

Should you let your dog hump pillows and toys?

Or anything else for that matter? There are many and varied reasons that may cause dogs to ‘hump’, the least of which is sexual desire. Your dog could be humping because he is bored, overstimulated, excited or anxious. It could be part of a cluster of dominating actions, or more disturbing, it could be the result of a distressing medical condition.

A dog’s humping can cause embarrassment within the household, and with guests. It could also negatively affect less dominant pets. It could also be a cry for help from the dog itself, if it has health problems.

There are almost no reasons why a dog’s humping would be considered desirable. The underlying cause of the behaviour needs to be understood and the problem remedied, before it becomes habitual.

Causes and remedies for the behaviour

Humping is the posture assumed when dogs mate. Usually, it is young males that have not been neutered that hump because of sexual arousal. It may occur, as with Sarge, when he is overstimulated by horseplay with a human or another animal.

Calmly, distract the dog and redirect its energy towards another activity. Do not attract undue attention to the action, like laughter, which may be seen as positive reinforcement. Neither should you scold the pup for what is a natural urge.

As soon as the dog is old enough, consider having it neutered. Not only will the humping occurrences diminish but there are several health and social benefits to be realised in the long run.

Not only males take to humping when they have excess energy. Females of all ages may do so if they get overexcited, for example, when their owner gets home and spends quality time with them after a long absence.

Remove the dog from the object and try to release some of the pent up tension by petting it gently. Once again, do not overreact to the situation.

If your dog has a favourite toy or pillow which has become the object of its affection, remove this for a while to see if the humping ceases.

A dog may hump a person or another animal that it has taken a liking to, as an expression of affection or an overture to play.

Most humans will not welcome this attention, and, while some dogs might accept it in the non-threatening spirit in which it was intended, others might take umbrage and retaliate aggressively.

To keep your pooch in everyone’s good books, it would be advisable to pre-empt the annoyance and remove the dog from the situation or redirect its attention.

Some members of a multi-canine household have the need to be top dog, and humping is one of the ways in which this is acted out. They may look comical or confused as it does not appear to matter which part of the other dog’s anatomy is the target, from the head to the tail.

Once again, this could get your dog into trouble, if the humpee should turn nasty. It could also cause the more passive dog stress that it is unable to cope with.

Either way, the behaviour needs to be stopped, and the dog’s energy channelled into more productive activities, such as a game or a walk. If the dominance persists, separate the dogs for short periods.

Similar to the dominance cause, your dog may be humping objects, animals or humans because of a lack of understanding of its standing in the world hierarchy. Usually this occurs because the dog was separated from it mother and litter mates too early.

There are socialisation classes and other situations, e.g. doggy daycare or supervised play dates, that can help to correct your dog’s understanding of its role in society.

Your dog may be humping because of a lack of mental or physical exercise. It may be spending too much time with nothing to do. Rather than chew up the furniture, it has chosen to vent its frustration by humping.

Consider establishing a regular routine of exercise, such as walking, which will get both you and your dog experiencing the outdoors.

Stimulate your canine companion mentally by letting it explore new horizons, or play games indoors when the weather is inclement.

There are several toys on the market that will entertain your dog without your involvement. A hardy rubber ball that dispenses treats as rewards could be enough of a distraction.

Often it is not clear why a dog becomes anxious. At the age of 12, my Jack Russell suddenly became terrified during electric storms. She trembled and sought comfort but other dogs may take to humping to relieve stress.

Do not add to the dogs anxiety by reprimanding it for humping. Redirect its attention and try to soothe it with petting. In the case of noises like thunder of firecrackers, try to remove the dog from the stressful situation, into a more sound proof area.

There are thunder shirts available that wrap round the dog, offering comfort. If you do not have one, try to simulate the pressure by hugging the dog or wrapping a long-sleeved t-shirt snugly around its torso. Try not to leave the dog to its own devices.

A dog may also develop a strong attachment to a member of the household and have a problem being left at home when that person leaves, regardless of the length of absence or who else is in the house. It may seek solace in humping an object belonging to that person.

Try to understand that the dog has this anxiety and address it accordingly. Soothe and distract the dog in the short term. In the long run, train the dog not to fear your absence.

The sad truth of rescued dogs is that we generally do not understand the effects of their potentially traumatic history. This may manifest itself in a number of ways, including indiscriminate humping.

Patience and love are required, in spades, to get the best out of your rescue dog. Any hint of harsh treatment may trigger anxiety, and even fear aggression.

If the dog is humping, do not remove it physically from the situation but call it to another location. Accompany the removal with a reward that reinforces the desired reaction, and distracts from the humping.

Your dog may be humping as a way to relieve pain caused by prostate problems or a urinary tract infection. Look for additional behavioural symptoms such as persistent licking or chewing of parts of its body.

If these are present, your dog may need medical attention and a visit to the vet is called for.

To conclude, you could let your dog happily hump away, providing it’s for a healthy reason… so perhaps let him have a toy to hump. But when it’s indicative of a problem, get in touch with your vet.