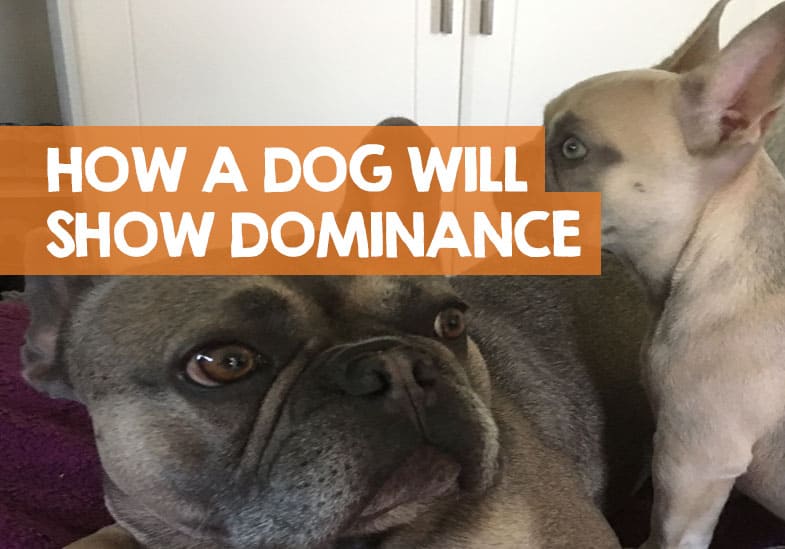 Without dominant or territorial traits, dogs can often find themselves in situations where they are dominated and bullied by other dogs, be it in the home or elsewhere. This can even lead to dogs becoming depressed or anxious if they are unable to act normally and defend themselves or protect their owner and possessions.

As a result, you will often you will see even the most mild-mannered of dogs, trying to show dominance over another. And it’s not always problematic… but you might have to worry if it leads to aggressive behavior, so here’s what to look for.

How does a dog show dominance over another dog?

There are several ways in which dogs show dominance over other dogs. In most cases, spotting this behavior is relatively simple. However, before we explain what these dominant behaviors are, we should clarify that there is another category closely related to dominance – submissive behavior.

Submissive dogs will often display behavior that is intended to indicate to other dogs that they are not a threat. For example, they may back off and allow other dogs to take their food or treats, turn away when other dogs stare at them, or roll on their backs and show their belly.

In general, most dogs fall somewhere between the two: there is no such thing as a purely dominant or submissive dog. In addition to this, many dogs will alter their behavior depending on how they feel around different groups of their species.

For example, a smaller dog may act dominant around other small dogs yet act submissive around larger breeds.

1. Baring of teeth, snarling, and growling

Dogs will show their dominance in a plethora of varying ways. However, most commonly, they will bare their teeth, snarl, growl, or bark at other canines that venture too close to their food, favorite toy, or territory.

As well as this, they may even begin to guard their owner, refusing to allow other dogs near without lunging at or biting them.

3. Staring down the other dog

Additionally, some dogs will stare at the other dog in an effort to get other canines to back down or to warn them to stay away. At times, prolonged eye contact between dogs may indicate that a fight is about to occur, and as such, you should be careful to separate them before this takes place.

4. Standing over another dog

When interacting with submissive dogs, dominant dogs will often attempt to mount or otherwise stand directly above them as they roll on their back to display their bellies.

In most cases, this will not lead to a confrontation, however, you should try and discourage this behavior when possible.

If left unaddressed, this may become a habit for your dog, potentially leading to them mounting other dogs whilst on walks or during playtime with random canines in the park.

Therefore, a delicate balance is needed for dog owners to address their furry companion’s behavior correctly.

First and foremost, it is important that we recognize the signs of when our dogs are acting dominant towards other canines and then act accordingly depending on the situation.

Why is dominant behavior so common in dogs?

One of the reasons so many dogs show dominance over other dogs is because they are naturally dominant (even at an early age) and has been installed in them from birth.

Although rarely the case nowadays (due to the guiding hand of responsible pet parents), puppies in the wild would regularly perish if they were unable to drink enough milk to fatten up and survive harsh weather, low temperatures, and other serious dangers.

Therefore, over hundreds of years, this has naturally led dogs to exhibit some domineering behavior towards other dogs, even from puppyhood.

Moving on, there is no doubt that many of us will have heard of the fascinating pack dynamics of wolves.

Through intense study of captive wolves, animal behaviorists, such as the famous Rudolph Schenkel, came to the conclusion that hierarchies existed in wolves and that these instinctual traits could also be applied to our domesticated companions as well.

However, despite popular belief that our dogs can be organized into alphas, omegas, betas, depending on their personality traits or behaviors, there is growing evidence indicating that this is not the case.

Instead, it is likely that the presence of dominant behavior is very much dependent on the breed of the dog, as well as the environment it has spent its life growing up in.

For example, dogs who are coddled too much or allowed to roam around freely without any type of boundaries are more likely to act dominant or aggressive to both their owners and other dogs.

Similarly, certain breeds, such as Siberian Huskies, American Bulldogs, Neapolitan Mastiffs, Giant Schnauzers, and even Jack Russel Terriers are prone to showing domineering type behavior due to the traits installed in them through numerous years of selective breeding.

Should you allow your dog to act dominant over another dog?

According to many canine experts, dominant behavior in dogs is not something that should be taken lightly, especially if it happens on a regular basis.

Despite this, many dogs subtly show dominance when living with other canines without any major incidents occurring. For example, it is not unusual for canines to display small signs of dominance by shifting their body or positioning themselves in subtle ways.

If you own a large pack of dogs, there will probably be one dog who is slightly more dominant than the others, and so long as they are well trained, this will usually cause no issues.

However, it is worth noting that you should never encourage or reward dominant behavior, especially if it shows any sign of developing into aggressive behavior in the future, or if it is a constant occurrence between dogs in the home.

Furthermore, there is always an increased risk that a dog prone to dominance may get into a serious fight with another dog or bite its owner when its problematic behavior is challenged.

Likewise, there is also the added risk that extremely dominant dogs may act aggressively towards small animals or children if this trait is left unaddressed.

Sadly, many dog owners unknowingly contribute to their dog’s dominant behavior by failing to address the issue or by refusing to train them whilst they are still young.

Unfortunately, without intervention, many dog’s dominant traits will gradually escalate as they get older, causing them to behave unpredictably, often showing increased signs of aggression towards both humans and pets.

Therefore, you should always make the effort to train your dog whilst they are still a puppy or young adult dog – otherwise they will always trying to show dominance over other dogs and this could result in clashes.

How to stop a dog from acting dominant over another dog

If you want to stop your dog from acting dominant over other dogs all the time, there a few methods you should attempt.

Firstly, you must implement a few boundaries and rules for your dog to follow at all times. For example, they should always be discouraged from approaching any other dogs in the house whilst they are eating (the same applies to toys and other objects).

Similarly, they must also be taught not to growl or snarl when people or other animals approach their food.

Additionally, you should also identify any other bad behaviors they could have and begin to eliminate them over a period of time. For example, it is quite common for dogs to refuse to get off the sofa or ignore your calls for them to sit or lie down.

Although this may seem innocent, this sort of behavior can quickly spiral into outright disobedience. With careful training and the use of treats, the majority of dogs will eventually lose a lot of their dominating traits.

Handy Hint: Here are more tips on how owners can assert dominance over a troublesome dog.

Dogs are territorial creatures at the best of times, and this can affect many of their day-to-day behaviors. In the wild, dogs primarily exist in packs, relying on their instincts to survive the brutal environment they live in. Without this ingrained behavior, our dog’s canine ancestors would have struggled to procreate and eventually died out entirely.

However, for modern-day dog owners, these territorial instincts can often prove troublesome, especially when they are displayed in non-suitable environments, such as in the home or at the local dog park.

Without being addressed correctly, territorial dominance can quickly turn into aggressive and dangerous behaviors and put a strain on the relationship between owner and pooch.