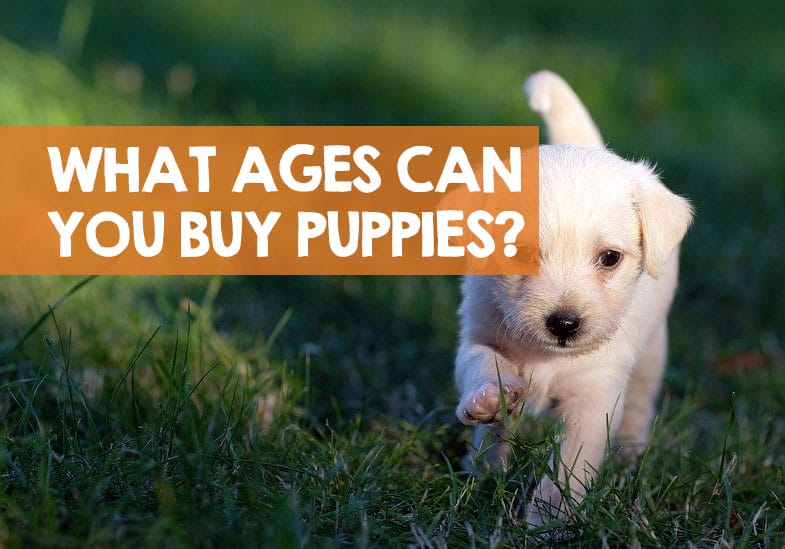 Before you rush out to buy a puppy, please be aware that there is guideline age for when you can get a puppy from a breeder. This isn’t just from a legal point of view, but also what’s right from an ethical perspective. In this blog I will explain below what the laws are in both the US and UK for buying puppies.

Here’s the short answer first, followed by some essential information anybody buying a puppy for the first time should know.

What age can you buy a puppy? In most US states you can buy a puppy from 8 weeks of age, although it’s 7 weeks in some places. In the UK you can’t buy a puppy until they are 8 weeks old, or 12 weeks of age in Scotland. Always check local laws.

I’ve detailed local laws further down the page so you can see what the differences are from US state to state. It also includes a section about how weaning is often more important than the age that you buy a puppy. This has the puppy’s best interests at heart rather than how old they are.

What age should you buy a puppy?

So, whilst there are age limits in place around the world, the best age to buy a puppy from a breeder will be once the puppies are fully weaned from the mother – in other words, be able to have independence.

However, the easiest ways for countries and states to put laws in place is to put a guideline age at which you can buy a puppy.

That means in most cases, you can buy puppies from breeders when they are between the ages of 6 to 15 weeks old. In truth, I think 6 weeks is far too young to buy a puppy, but the law will depend on where you are in the world and where you are buying from – between 8 and 12 weeks seems best.

Below I will break down the conditions to this rule, what can happen if a puppy is separated too young and some other things to watch out for when you are looking for the right age to buy a puppy.

Best age to get a puppy from a breeder?

Of course, laws change from country to country, state to state, so it’s important you verify the rules in your locality to get this right from a legal and ethical standpoint.

Where possible I have linked to trusted sources so you can refer to the specific rules wherever you are.

When can puppies be bought in United States?

As you know, the law for when you can buy puppies in the US can be complex because everything varies from state to state.

There is no nationwide rule on the buying of puppies, and some states like Delaware, Idaho, and Iowa don’t even have laws regarding the age puppies should be before being bought.

According to the Animal Legal & Historical Center, 27 states have fixed age laws pertaining to the sale of puppies.

In most states, the legal age to buy puppies us 8 weeks old. This is the absolute youngest a puppy should be separated from their mother. Many states also put in a clause that the dog should also be weaned before leaving their mother’s side. (I will define weaning in a later section).

In Maine, Wisconsin, and Virginia, you can legally buy a puppy at 7 weeks old.

Washington D.C goes the youngest, allowing you to buy a puppy at 6 weeks old legally if you so choose.

Handy Hint: I recommend you take a look at this table of state laws drawn up by the Animal Legal & Historical Center to see the exact law wherever you are in the United States.

When can puppies be bought in the UK?

The UK also has varying laws for when puppies can be bought depending on the country you are in. For example, the legal age to buy puppies in the England, Wales, and Northern Ireland parts of the UK is 8 weeks old.

However, in the north of the UK, Scotland has different legislation. You cannot buy a puppy until they are 12 weeks old at a minimum.

The law for puppies being bought from overseas

Generally, it is not a great idea to buy a puppy overseas. Why?

Well, breeding standards differ greatly from country to country. Licenses may not be procured from the proper channels and it is harder to do background checks on breeders if you are not local to the country.

Having said that, if you choose to buy a dog abroad, what age should a puppy be before you bring them back to your home country?

The standard is at least 15 weeks and fully weaned from their mother.

Your home country may also require the following before they are permitted to cross borders:

Why is it illegal to buy puppies before 8 weeks?

There are very good reasons why you can’t buy a puppy younger than 8 weeks old in many countries and states. It’s all down to weaning which I touched upon earlier.

Professional breeders typically start the weaning process after their puppies are 3 to 4 weeks of age.

The idea is that the puppy is eating 100% solid food by the time they are 7 or 8 weeks old.

But like all things, the individual dog can take to the process differently… which is why the age of a dog is not always the best barometer to when puppies can be sold.

Most dogs will stop weaning by the end of their 8-week birthday, but some can take faster or longer than that.

If there were complications with the birth, the puppy may need more time. The breeder should be proficient and compassionate enough to allow the process to happen as naturally as possible.

What happens if you buy a puppy before it has been weaned?

The first couple of weeks of a puppy’s life is crucial to their development, very much like the early months of a human baby’s life.

The time spent with their brothers and sisters is their first interaction with other dogs. They learn canine communication. They learn how to play effectively. They also learn good manners from mama bear in these early stages.

If you take a puppy away from their mother before they are fully weaned, you may face behavioral, mental, and psychological issues.

These puppies are therefore much harder to train.

The bottom line is it’s cruel if they have not been weaned.

Is it cruel to remove a puppy from their mother before 8 weeks?

However, if the puppy has been fully weaned and is fit and healthy, it isn’t cruel to take them away at 8 weeks of age.

We often think that because dogs are so tiny when they are born that they aren’t as developed. The truth is humans just age super slowly!

You can’t measure the 8 weeks of a dog’s life the same way you measure a human baby ages. Dogs age much faster than us.

For context, vets commonly agree that a one-year-old dog is the same developmentally as a fifteen-year-old human.

So, imagine how speedily they are growing in puppyhood! You need not worry that it is too soon. As long as you are caring for your new puppy properly, it is perfectly fine to take them away from their mothers after weaning.

Handy Hint: I explain whether it’s ok to buy a puppy or dog without papers.

So now you know when puppies can be bought legally and ethically, I wanted to draw your attention to the practices of good breeders. There are dangerous, illegal, and high unethical puppy farms selling puppies so it’s important you can spot these.

Be sure not to support any breeders that do not abide by the following standards:

If in doubt, your local veterinarian may have recommendations of reputable, professional breeders in your area.

Over the last 12 months there has been a huge increase in people wanting to buy puppies. This has been attributed to the current health crisis of 2020 and 2021 that are occurring throughout the world.

With this increase in demand, it’s unfortunately seen an increase in unscrupulous people trying to turn a quick profit and sell puppies before the right time to do so.

If you are buying a puppy, please do wait until they are fully weaned and at least 8 weeks old… and do your research into the breeder first.