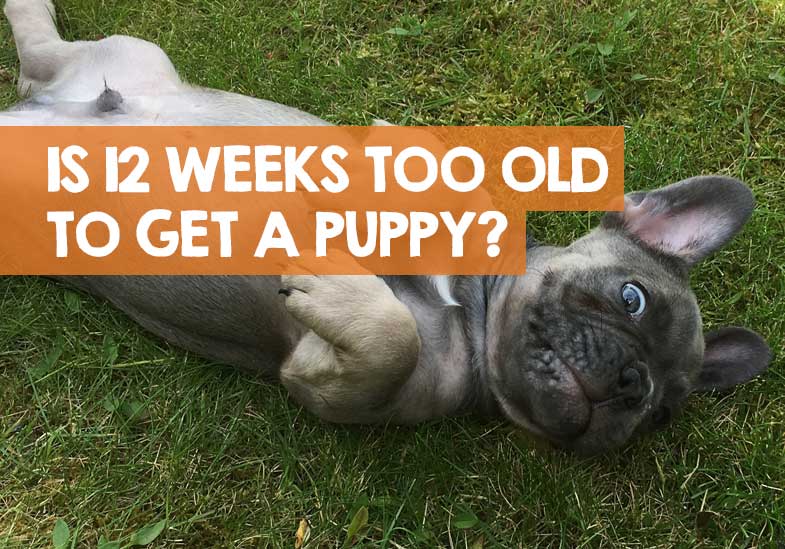 In my opinion, there’s never an age too old to get a puppy. If a dog needs a home, then hopefully you are able to give it one. However, if you do leave it later, there could be issues around socialization and training which could need addressing.

To find out more, please read this opinion piece from one of our readers who explains whether it’s better to get a puppy at 8 weeks or 12 weeks old. It references a lot of studies into canine behavior.

How age can be a factor in your puppy’s behavior

Two years ago, I learned how important age can be with dogs and how the adjust. This was after I got my second pure-bred American Pit bull terrier from a breeder.

My first dog was already 14 years old, was becoming slow, and needed frequent visits to the vet for different complaints. We thought having a younger dog around may perk him up.

We wanted to get the new puppy right away, but the breeder insisted we wait until the pup was at least 8 weeks old (the legal requirement in many states). This advice is backed by more than 50 years of research on dog behavior.

Is 3 months too old to get a puppy?

3 months is not too old to get a puppy. One of the earliest studies to support this recommendation was by Fox & Stelzner in 1967.

To determine the effect of varying increments of socialization on the development of social behavior patterns, 17 dogs (8 pure-bred beagles and 9 mongrels) were divided into 3 groups.

The first group was weaned from their mother at 3 days old, the second group at 3.5 weeks, and the third group at 8 weeks.  At 12 weeks of age, the puppies underwent a series of behavior tests. The pups who were weaned earliest showed the largest deficit in social development, while the pups weaned at 8 weeks and up had no apparent deficits.

What happens before 8 weeks is a lot of caring from the mother, and later, playing with the littermates.

During the first 2 weeks, the puppies are completely dependent on the mother.  A newborn pup is blind and deaf with poor motor skills due to the immaturity of the brain. An electroencephalogram will show no difference in the electrical activity of the brain during awake and sleeping states.  Stimulation through light and sound will not evoke a response.

During this neonatal period, the puppiy is highly dependent on the mother for nourishment, warmth, and even urination and defecation which the mother stimulates through anogenital licking.

Separation from the mother at this stage increases the risk for disease and death. These puppies are also more likely to develop behavioral problems as an adult such as fearfulness on walks, noise reactivity, and excessive barking.

By 3 weeks, the eyes and ears of the puppies gradually open, and they begin to walk and explore.  The mother occasionally leaves her puppies, and the puppies play with their littermates.

Lone puppies will miss out on this activity and will require special care. Some puppies may start whining and yelping when the mother leaves them, but this decreases as the pup interacts with his littermates.

This marks the beginning of the socialization period which typically occurs from 3.5 to 12 weeks.

Socialization refers to the process wherein the puppy is gradually exposed to new experiences, animals and objects, and numerous sounds and textures that he is likely to encounter during the course of his life.

This should also include exposure to humans of varying ages, sexes, and races. Gradual exposure provides a moderately challenging environment which allows the puppy to cope and develop resilience. Resilient dogs can cope with new challenges in the future.

Between 5 to 7 weeks, the mother gradually weans her puppies by walking away, growling, baring her teeth, or biting softly, thus introducing them to dominant and submissive interactions, discipline, and other social behavior.

This is still too early to take the puppy away from the mother though. The puppies engage in play-fights among littermates, run together, bite each other, and learn to interpret vocalizations.

Puppies with play enrichment by 8 weeks usually results in less fear and anxiety when they are 1.5 years old. Those with limited interaction may later manifest aggressive behavior such as growling, snapping, biting, or lunging at an unfamiliar dog.

Some puppies who encounter a traumatic experience during early interaction with other dogs may also exhibit aggressive behavior by 1.5 years.

Thus, early interaction with unfamiliar dogs should be restricted to a safe environment.

There are breed-specific variations in the timing of the socialization period.  For example, Cavalier King Charles spaniel pups had delayed onset of early socialization compared to Yorkshire terrier pups and German Shepherd pups.

When is the best time to introduce socialization with humans?

In a study involving 34 Cocker spaniel and Beagle pups, pups that were socialized with humans before they were 3 weeks old scored low in behavior tests conducted at 15 weeks compared to pups socialized to humans at 5,7 or 9 weeks old. The puppies with no socialization with humans exhibited extremely fearful and avoidant behavior towards humans.

If you got your puppy at 12 weeks old, he would now be ready for more interaction and socialization, unless you got him from a pet store.

In a 2016 study comparing the aggressive behavior of puppies, researchers analyzed the response to online questionnaires by 173 companion dog owners who got their puppies from pet stores and 349 who got them from official breeders.

The pet store puppies had significantly greater owner-directed aggression. A similar finding was reported by Cannas, Simona et.al. in 2018. In their study about factors associated with behavioral problems in 335 dogs brought to a behavioral clinic in northern Italy, all the dogs adopted from pet shops were found to be anxious (5).

Unlike most pet store owners, breeders raise healthy and sociable puppies and also select and educate owners about the importance of continuing socialization and training. However, while pups from breeders generally fare better than those from pet stores, there are responsible and irresponsible breeders.  Aggression and separation-related behavioral disorders are more frequent in dogs obtained from irresponsible breeders.

How reversible are the consequences of early life experiences? You may improve upon a poor start in life by providing more socialization experiences.

How do you take care of your 12-week old dog?

The Royal Society for the Prevention of Cruelty to Animals provides a practical checklist (6):

When we brought home our tiny Pitbull he weighed 1.5 kg. The breeder warned us that he was the runt of the litter and offered the bigger puppies instead. But we insisted and named him Barry.

The tiny puppy took to our aging Pitbull like a child to a mother. Both of them are males, but whatever. He would climb up and down his back and jump on the older dog’s tail as it swished.

The older dog moved around more often, trying to avoid the frisky newcomer. But when the little one fell asleep nestled on his chest,  they both looked at peace.

Paddy passed away 8 months after Barry arrived.  Barry is now 2 years old and weighs 31 kg.  He is not only well socialized, he has become the life of the party.

Now that social events are conducted through Xoom meetings, friends would request to see Barry. Barry would then climb up the chair, sit in front of the computer, and patiently wait while our friends greeted him and told him how much they missed him.

Research evidence may point us to scientifically proven ways to care for our puppies. But they will have a hard time measuring the most important secret ingredient. Love.

Getting a puppy at 12 weeks or 3 months of age is not too late. At this point they will have a degree of socialization already and are still young enough for you to train them into becoming well behaved and well-adjusted dogs.