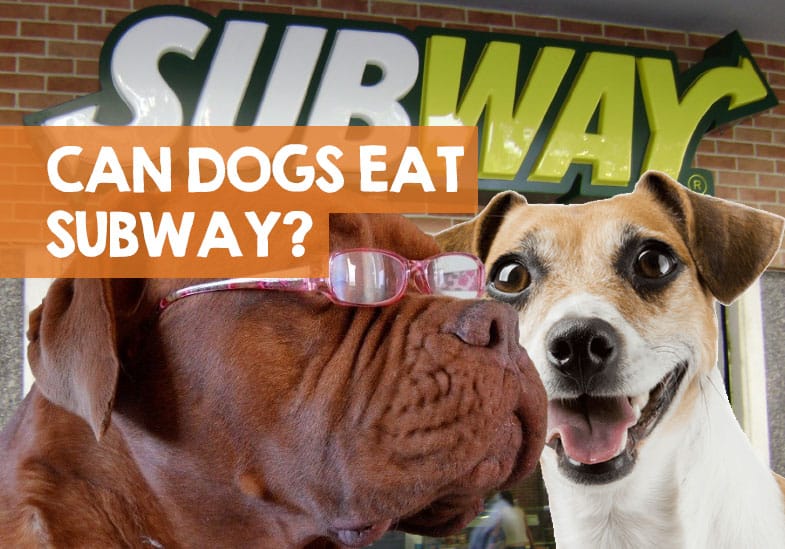 Who doesn’t love a sub sandwich from Subway? I know I do, and my dog would wolf down a Subway meal given half the chance too, but that doesn’t make it right. However, sometimes your dog might accidentally eat a Subway sandwich, or it could be your only option for them when out on the road.

In truth, Subway is a lot healthier than most fast food outlets for your dog because you have the flexibility in being able to customize the sandwich. In short though, here’s the answer to whether dogs can eat Subway sandwiches and cookies, followed by a healthier option when choosing the fillings.

Can dogs eat Subway sandwiches? Dogs can eat Subways sandwiches providing you don’t add any sauce or toppings, give them plain bread, and limit the filling to a plain meat option with no added spice, seasoning or coating. The chocolate in Subway cookies is also toxic to dogs.

But just because dogs can eat Subway, it doesn’t mean they should as I will explain below. The bottom line is, I don’t recommend you feed your dog Subway unless it’s the very last option available to you.

What can dogs eat at Subway?

I decided to figure out if there was a way of letting your dog eat Subway without you feeling bad or guilty about what you’re feeding him. Whilst there is no such thing as a dog-friendly Subway menu, you could customize your sub sandwich to make it healthier for your pooch.

Firstly, I would opt for a plain white roll with no grain or seeds. Whilst bread isn’t great for dog diets, essentially, it’s safe to eat providing your dog doesn’t have any allergies to wheat and grain.

When you move onto the main filling, you should choose a meat option that has no spicy coating, salt, peppers, or flavorings added. Here is what you can usually order from most Subway restaurants.

The ones I can see would work best would be the plain chicken options, followed by turkey or ham. Steak is also okay but check that it hasn’t been fried.

Moving onto the toppings, in most cases I would completely avoid them as it will make the Subway sandwich a lot easier for your dog to eat.

But there’s also the consideration that one of the toppings are toxic to dogs; it’s the red onion.

Onions, garlic, and leeks are part of the allium family of foods, all of which can poison dogs in large quantities. There won’t be enough in a sub to kill your dog, but it could make them sick.

I would also avoid the jalapeños as any spice can play havoc with a dog’s stomach. That’s also another reason to not add any of the rich sauces onto your plain dog friendly Subway sandwich.

Other than that, you should be good to go with your plain meat Subway sandwich your dog can eat. Just don’t make a habit of it, it should be viewed as an occasional treat.

I love Subway cookies and often grab a couple to eat in the car. With Claude the dog sat in the back, it doesn’t take long for me to see those pleading doggy eyes in my rear-view mirror. I won’t give in though, and there’s a good reason why.

Dogs should not be given Subway cookies to eat. There are 4 different varieties of cookie at Subway, and they all contain chocolate and plenty of sugar.

You might ask yourself what the problem with a cookie here and there is, and I might agree with you if wasn’t for the chocolate content. Chocolate is toxic to dogs and can even poison them.

Don’t just take my word for it, here’s some guidance on the VCA Hospital website about how bad chocolate can be for dogs.

“While rarely fatal, chocolate ingestion can result in significant illness. Chocolate is toxic because it contains a chemical called theobromine. Theobromine is the predominant toxin in chocolate and is very similar to caffeine. Both chemicals are also used medicinally as a diuretic, heart stimulant, blood vessel dilator, and a smooth muscle relaxant. Dogs cannot metabolize theobromine and caffeine as well as people can.”

I don’t want to scaremonger too much though, because just because your dog ate a Subway cookie, it doesn’t mean he will be seriously ill. It will depend on the size of the dog, and how much of the cookie chocolate was eaten… and in some Subway cookies there is less chocolate than others.

Referring back to the VCA Hospital website again, here’s what the say about how much chocolate your dog would need to eat to be ill.

Either way, it’s not worth the risk. If you let your dog eat Subway cookies, there’s every chance he will be ill.

And then there’s the calories involved!

Below is a list of the different Subway cookies and how many calories they have. I’ve then shown you how much of a medium sized dog’s recommend daily calories this will account for.

As you can see, Subway cookies are bad for dogs for more than just the toxic chocolate reason. They will also make up a large proportion of what they should eat in day and could possibly lead to weight problems and diabetes.

Disclaimer: Please note that the opinion in this article should not be construed as veterinarian advice. This is purely my own personal opinion based on my experiences with a dog and my online research.

All dogs deserve a little treat from time to time, and it’s unlikely that your dog will be harmed by having a little plain Subway sandwich occasionally.

Just don’t make a habit of it, as dogs are just as prone to weight problems as us, and not all human food is suitable to them… and can even poison them!

I often blog about the good and bad of what dogs can eat, including some of the more popular fast food chains. Here are my views on some of those big-name brands.