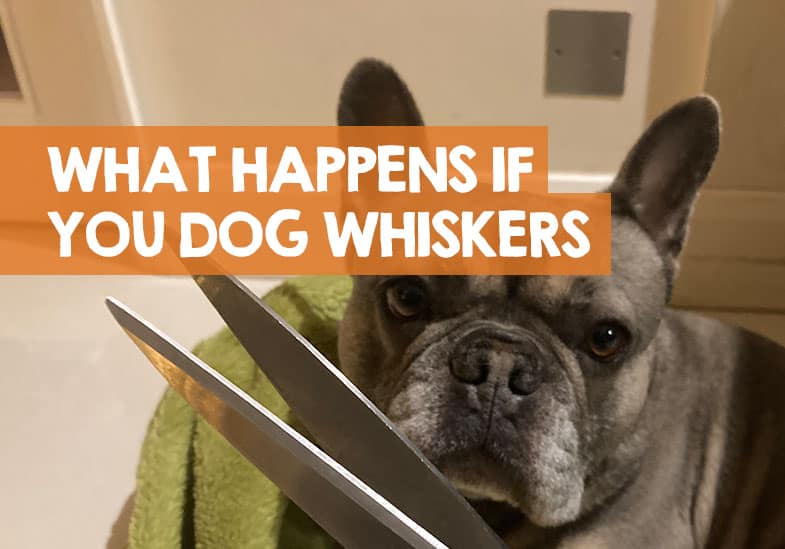 One of the dangers of grooming your dog yourself is you accidentally cutting their whiskers cut off. I’ve seen photos on Twitter of dog’s owner doing this too many times, with some believing it to be funny. However, whilst it won’t hurt the dog when the whiskers are cut off, it can impact how they get around safely.

By trimming dog’s whiskers, some say it might make your dog look smarter (though I disagree) but your dog can feel a bit lost without them. I also know some people like to yank dog whiskers out (naughty kids are guilty of this one!) and that can be painful for dogs.

What happens if you cut a dog’s whiskers off? If you cut your dog’s whiskers off accidentally it won’t hurt them. However, a dog can feel a lost with no whiskers. Hairs act as sensory devices to help a dog move around the environment safely. When they’re cut off, your dog could lose his sense of navigation and become confused.

While dogs do have a good sense of smell, vision, and excellent hearing, their whiskers are also valuable for aiding them through their daily activities.

Read on to find out more about dog whiskers, what happens when they are cut off, what purpose they play in your dog’s daily life, and how to groom your dog without cutting his whiskers.

What are dog whiskers used for?

Dogs are mammals and have hair covering their bodies. Hair covering varies in different mammals. The amount of hair also differs between mammals. Look at us humans – we don’t have fur covering our whole body like our fur-babies.

We do have whiskers but not in the same way that our dogs have whiskers. Your dog’s whiskers grows from hair follicles. However, their roots go down further than normal hairs and whiskers are coarse and thick. They also stick out more obviously.

Whiskers are not found all over your dog’s body. Instead, they’re more strategically placed for a very good reason (which I will get to in a moment). If you study your dog’s face closely, you’ll find whiskers in the following places:

You’ll also notice that different dog breeds have varying patterns of where they whiskers are located. But, they’re more or less always found by the eyes, nose, and on the chin.

Have you noticed that puppies are born with whiskers? This tells me just how important these hard hairs actually are.

Whiskers are also known as “tactile hairs”. This doesn’t mean they actually feel anything with their whiskers. But the follicles from which they grow are full of nerves and blood vessels which relay messages to the brain.

This makes whiskers sensitive to touch.

Imagine your canine whiskers as antennas. Whenever they touch something, they send a message back to the dog’s brain. In other words, your dog’s whiskers are his receptors, recording information as he scoots around.

These whisker receptors act as your dog’s “eyes”, using touch to tell him what’s going around him. The whiskers help him to determine the shape and size of anything close to him.

Whiskers can even help your dog figure out the speed of an object. The whiskers pick up vibrations in the air and indicate how close a moving object is to him.

How do whiskers keep dogs safe?

A dog’s whiskers can be used to help them decide if a space is too small for them to move through. Whiskers keep your dog out of harm’s way especially when walking outdoors and surrounded by cars, motorcycles, rogue skateboards and even cyclists, runners, and anything else that creates movement.

Dogs don’t have great vision for seeing objects close up. Instead, the whiskers act as radar sensors. The closer a dog gets to an object, the more his whiskers pick up any vibrations in the air.

If the object is stationary, your dog’s movements will bounce off that object creating vibrations in the air.

Dog whiskers vibrate as the air currents move and this action sends messages back to the follicles which in turn relay a message to your dog’s brain. For interest sake, dog’s whiskers are also known scientifically as “vibrissae” which in Latin means “to vibrate”.

Like radars, these whiskers help your dog to locate objects at home and when he’s out and about. They’re extremely useful at nighttime too. Wild dogs use whiskers to alert them when there’s prey or predators nearby – they can even help them measure gaps such as those on balcony railings.

What happens when you cut off your dog’s whiskers by accident?

While cutting off dogs’ whiskers may not be all that painful for them, your dog will lose his sense of navigation. Your dog will feel like he’s lost a valuable part of himself (which he has) as he tries to function safely in his external world.

Your dog will likely bump more often into objects and he’ll lose his astute ability to pick up any movement around him. While he also relies on his hearing and sense of smell, he may not be as quick on picking up on that cyclist speeding down the road.

Your dog is constantly having messages relayed to his brain all day long via all of his senses. Losing his whiskers means he has one less tool to help him navigate his world safely. If anything, your dog will feel confused and disorientated if he loses his radar sensors.

How to groom your dog without cutting off his whiskers

To keep your four-legged friend out of any serious trouble, you need to protect his whiskers. This includes not yanking at the whiskers to pull them out. It also means being extra careful when grooming your dog.

Here are some tips to grooming your dog while ensuring his whiskers are safe from the scissors.

1. Use the right tools

Make sure the grooming shears have been designed specifically for dogs. These spears have a rounded tip with a serrated edge and a sharp edge like these ones on Amazon.

When grooming your dog, make sure you give yourself enough time to do it. Grooming shouldn’t be a rushed job.

This is when most accidents happen, and you end up nicking your dog. If you’re not being patient, you’re not focusing properly, and you run the risk of also cutting off his whiskers.

3. Go slow on the head and only use shears

Infinite patience is required when you start trimming the hairs on your dog’s head. Make sure you only use pet grooming shears that have all the safety features mentioned above. Cover your dog’s eyes when you work in that area and trim the hairs around the eyes.

You could also hold each individual whisker when trimming the hairs around the muzzle and jaw line. This could be tedious, and you’ll need to take lots of little breaks so you and your dog don’t get frustrated.

Do dog whiskers grow back?

If you accidentally cut one of your dog’s whiskers, don’t panic. It can happen and they will grow back. How long it takes depends a lot on your dog’s age, health, and type of dog breed. You can out more about the different variables in this blog post about whiskers growing back.

Dog whiskers do also fall out on their own occasionally. While this isn’t normally a cause for concern, if you noticing it happening often then take your fur-baby for a check up with the vet. There could be an underlying health reason for your doggie’s whiskers suddenly falling out.

It might make them look smarter, but I honestly feel that when you cut your dog’s whiskers, the negatives far outweigh the positives… it’s not really fair is it?