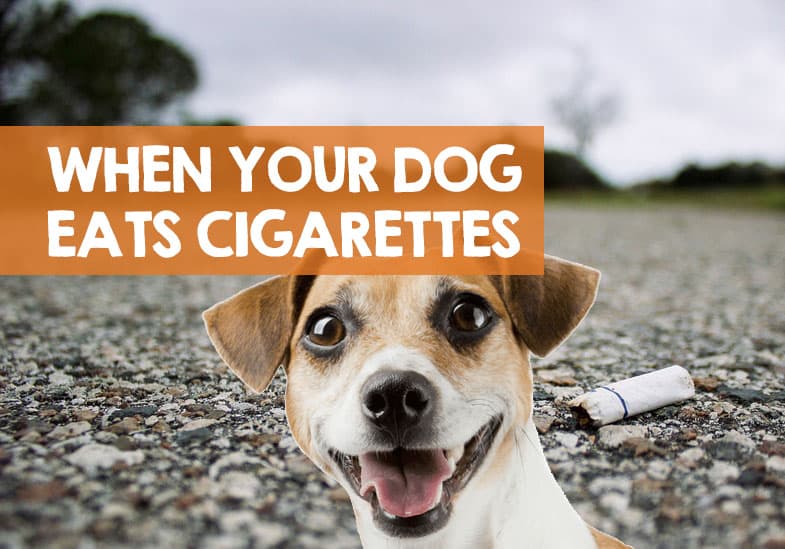 Given their scavenging habits, it’s not unusual for dogs to consume things that we would consider unappetizing or even inedible. A classic example would be when dogs eat cigarette buts left on the ground, perhaps a filter tip end, or even cigarette ash.

Similarly, in rare instances, it is not unheard of for dogs to eat whole packets of their cigarettes left unguarded by an owner. This typically happens when dogs are bored or left to their own devices.

Naturally, every owner will be concerned about the health implications of cigarettes being eaten by dogs. After all, every year, more and more people are cutting back or choosing not to smoke due to the harmful effects of nicotine.

However, how do these risks apply to dogs as well? Should we be overly concerned if our dog eats a cigarette but of ash off the floor? Here’s the full lowdown.

How does nicotine affect dogs?

Cigarettes contain numerous different components and chemicals that will make your dog sick if he consumes them. However, it is the primary ingredient – nicotine – that is the most dangerous to dogs when eating cigarettes.

To better understand this, it is worth looking at where nicotine comes from in the first place. Interestingly, nicotine is naturally produced by plants belonging to the nightshade family (such as tobacco) and is not artificially made. Since the 1690s, it has been widely used as an insecticide, helping farmers to keep their crops safe from destructive species of insects such as aphids and crickets.

Nicotine has also had a history of being utilized as a pesticide, although this practice is now banned in many countries around the world and is generally frowned upon. Nicotine quickly causes paralysis and other neurological issues to develop, eventually leading to a speedy and unpleasant death in insects.

Unfortunately, many of these neurological issues are known to carry over to mammals that have digested nicotine, with this being part of the reason it is no longer deemed an appropriate pesticide.

What happens if a dog eats a cigarette but?

Unlike humans, dogs are not built to handle even the smallest amounts of nicotine, and they can quickly become ill after accidentally eating a cigarette but.

It is worth noting that smaller breeds of dogs are particularly at risk of becoming seriously ill, so you should always be on alert when walking your small dog in an area that is popular with smokers.

What happens if a dog eats a cigarette filter tip?

Despite this, even the largest breeds of dogs can get ill from eating cigarette filter tips that contain nicotine. Many dog owners mistakenly believe that their Great Danes and Wolfhounds are safe due to their immense size.

However, what they fail to realize is that there is a fundamental difference between smoking nicotine and digesting it.

For example, humans cannot eat nicotine either, experiencing severe symptoms and nausea should they try to do so.

What is nicotine poisoning?

Nicotine poisoning is a serious condition that develops in dogs after they have eaten large amounts of nicotine-based products. Similar to humans, dogs have numerous nicotine receptors in their bodies that in most circumstances, function perfectly normally. However, when exposed to excessive amounts of nicotine they can begin to stop working properly, leading to severe symptoms and in some circumstances, even death.

Typically, nicotine from eating cigarettes will be distributed rapidly throughout a dog’s body after initial consumption, wreaking havoc on their systems around 1 to 4 hours later.

Some of the most common symptoms dogs will develop after eating cigarettes include salivation, vomiting, diarrhea, dizziness, constricted pupils, and tremors.

However, these symptoms can vary in severity depending on the quantity of nicotine the dog has eaten. In extreme cases, dogs may collapse, experience hallucinations, convulse and suffer seizures – if your dog eats lots of cigarette buts this is a very real risk, and the vet should be called at the point it happens.

How much nicotine from a cigarette will kill a dog?

A lethal dose of nicotine that could kill a dog that eats cigarettes typically varies depending on the size of the dog. Most standard cigarettes contain around 9 to 30 mg of nicotine, which is a large amount for any animal to consume.

Typically, doses ranging from 9.2mg and upwards are almost always fatal, especially if immediate treatment is not sought. Furthermore, for smaller breeds, ingesting as little as 5mg can cause severe symptoms and sometimes lead to death.

What happens when a dog eats cigarette ash?

It is worth noting that used cigarettes and ash can also prove dangerous to dogs, as most of the nicotine contained is concentrated in the cigarette butt. There can also be nicotine left over in ash that a dog eats.

Unfortunately, the most common way a dog can develop this condition is through eating butts found on the ground or in other public places.

If you are a smoker, try to be mindful that you are disposing of your cigarettes safely, so as not to inadvertently poison your own dog, or other local canines and pets.

Are nicotine-based products dangerous for dogs?

According to online sources, nicotine poisoning is more common in dogs than ever due to the large variety of new nicotine-based products available on the market. Popular alternatives to traditional cigarettes, such as E-cigarettes and nicotine mints are now responsible for many cases.

It is not uncommon for dog owners to forget to store them away safely so that their furry friend has no chance of reaching them. To make matters worse, E-cigarettes are known to contain scents and flavors that are very appealing to canines.

For this reason, you should only refill your E-cigarette when you are not in the same room as your pup.

Likewise, any tobacco-based product containing nicotine has the potential to be dangerous to your pooch’s health. Therefore, you should always ensure that any products containing this ingredient (such as cigars, chewing tobacco, nicotine inhalers, nicotine patches, pipes, and cigarettes) are kept in a secure place, far away from any pets you have in your home.

Interestingly, it is sometimes difficult to predict whether nicotine-based gums will cause a toxic reaction in dogs, as this often depends on whether the offending pooch has chewed or swallowed the sticky substance.

How is nicotine poisoning in dogs treated?

If you dog has eaten a cigarette and you are worried about what could happen, call a vet immediately. If you suspect your dog has nicotine poisoning or have observed them consuming a nicotine-based product, immediately seek expert advice.

Like any health crisis, early treatment is critical and can make all the difference in saving your dog’s life.

Similarly, if you are uncertain whether your dog’s symptoms of poisoning are nicotine related, try to ascertain where you have recently walked them (such as a street where cigarette butts are regularly discarded) and report your suspicions to your vet.

In most cases, veterinarians will attempt to lessen the amount of nicotine the canine is absorbing together with promoting its excretion through various methods like forced vomiting.

At times they may use activated charcoal, an odorless black powder effective at absorbing toxins, to lessen the symptoms.

Alongside this, they will aim to manage and treat any convulsions, seizures, and heart and blood pressure abnormalities the poorly pooch may be experiencing, as well as providing respiratory aids and intravenous fluids.

Thankfully, most dogs survive nicotine poisoning, although a rapid response is critical for this outcome to be achieved.

Over thousands of years, our canine friends have developed into experienced scavengers that will devour anything to survive. Unfortunately, this trait is a double-edged sword for canines, and despite no longer needing to compete for food, many dogs still fall sick from consuming inappropriate foods and objects.

Some breeds are more susceptible to this habit than others, although across the board almost all dogs will occasionally eat something that upsets their digestive system, no matter how well trained they are.

When it comes to younger dogs, curiosity plays a huge role in this, with many puppies chowing down on strange objects when left alone to explore the backyard for long periods.

Thankfully, most dogs are hardy creatures, and in the majority of cases, will only suffer an upset stomach after consuming something they should not – be it bird or rabbit droppings, cat poop, or plastic bags.

However, it is important to realize that many household items and consumables can prove toxic for our canine friends.

Dogs and puppies will often eat discarded cigarette buts on ground, often hoovering them up when trying to eat something entirely different.

Be wary of what the possible consequences could be if your dog eats a cigarette but and be prepared to possibly have a sick pet.