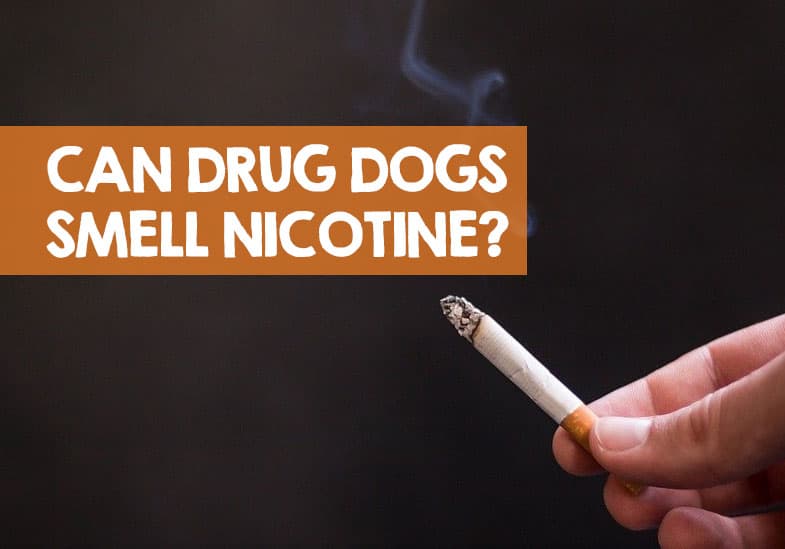 Dogs have some of the best smelling skills in the animal kingdom, with 300 million olfactory receptors in their nose. This is what gives them such a superb sense of smell, which is said to as much as 10,000 times more accurate than humans.

Given their amazing sense of smell, plus the ability to be trained, dogs are used as a key tool within law enforcement. They are can be used by police, border patrol, prison officials, and customs officials to smell out various illegal items including contraband such as cigarettes, nicotine, and tobacco.

But given the variety of banned substances in the modern world, can drug dogs smell nicotine, in particular tobacco-based products?

To uncover the truth, I spent some time watching videos and reading articles by police handlers who work with sniffer dogs. It was interesting to see whether drug dogs can smell tobacco at airports and customs, even if it’s been disguised.

Here’s what I found out about police dogs and nicotine, and how they are trained to smell certain substances including tobacco and cigarettes.

Drug dogs can smell nicotine, tobacco, or cigarettes, but whether the particular dog will have been trained to sniff out nicotine and alert their police handlers is dependent on their usage. Some dogs are trained to smell for tobacco at customs and in prisons.

The bottom line is, police dogs can smell anything they have been trained to detect. For example, research published in 2019 found they dogs can accurately sniff out cancer in blood. If dogs can smell cancer cells, they can certainly smell tobacco and nicotine products such as cigarettes, juice, and gum.

Are drug dogs trained to smell for nicotine?

The majority of drug and police dogs are probably not trained to smell for nicotine. However, dogs that are used by customs officials where cigarettes are a regulated product may well have been.

“Each dog can be trained to identify a range of both legal and illegal tobacco product strengths. The illicit tobacco market is continuously changing and adapting, but dog trainers can modify training and adjust quickly too. They love a new challenge!”

The bottom line is, it is possible to train drug dogs to smell for tobacco and nicotine. They will also be able to detect and smell for variations of nicotine products such as nicotine juice and gum.

Given that we now know that is it possible for dogs to be trained to smell for nicotine and how powerful their sense of smell is, then it should come as no surprise that they can smell nicotine gum or juice.

Trained police and customs dogs have such an acute sense of smell, that they could even smell nicotine that has been dissolved into liquid, like juice.

This is because they are able to separate odors that are mixed up. For example, when a human smells stew, they just smell stew. When a dog smells stew, he can differentiate between the odors of all the ingredients mixed in together.

I will leave you with a great comment a UK customs officer said to a TV crew which just about sums it up.

“Nothing can disguise the smell of nicotine as the customs dog has been trained for it. We have dogs who can detect cigarettes at the bottom of full 55-gallon barrel of oil.”

This shows the power of a dog’s sense of smell, so it stands to reason they would be able to smell nicotine juice and gum, even when hidden in a car.

Handy Hint: If a police dog has been trained to detect THC and cannabis it’s very likely they will be able to smell a vape pen with it in.

What about smelling nicotine through a car?

You will read countless reports and forums posts from people who haven’t been detected when taking cigarettes through customs and borders in a car. The custom and police dogs are not 100% fool proof with sniffing out nicotine.

But generally speaking, they are extremely good at it and it is possible for drug dogs to smell nicotine through a car.

For example, the smell of tobacco is very potent, and humans can easily smell it when up close.

Given that a dog’s sense of smell is thousands of times better than ours, unless the tobacco and cigarettes have been concealed very well, there’s every chance a police dog could smell them.

Even if the dog isn’t trained to smell for nicotine, it might still sniff out the cigarettes as an unusual smell and alert the customs handler.

How dogs are trained to smell for tobacco

Dogs can smell out and signal for anything they are trained to do. If police or customs wanted to train their sniffer dogs to smell for cigarettes and tobacco it would require the following process:

In the training game, low amounts of nicotine are used in training due to dogs amazing sense of smell. Dogs are trained to locate the smell, sit down and point with their noise where it is. Handlers take care to ensure the dog does not eat the cigarettes, as this can be harmful as described here.

Handy Hint: Did you know that dogs cannot smell LSD as it has no smell, but they might be able to pick up scent traces from the manufacturing process.

It’s not unusual to see crime fighting pooches working at airports and border controls to help police handlers by sniffing out a wide range of narcotics.

Even those who are not trained as police dogs to sniff out nicotine, that doesn’t mean they won’t smell it, given how some can also alert on unusual odors.