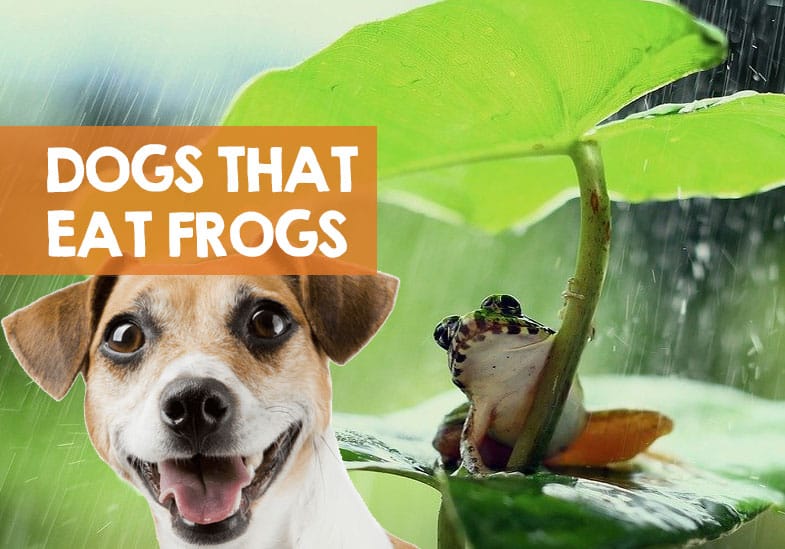 Last week I was walking the in the forest when my dog saw a frog jumping near a pond. His immediate reaction was to give chase. However, my dog isn’t the best catcher, so had no chance once the frog entered the water.

But it did make me wonder what would have happened if my dog had eaten the frog. I spoke to vets and did my own research, and here’s what I found out about the possible dangers of dogs eating frogs and what I could do to help if such a situation were to occur.

Here’s the short answer about whether it’s bad for a dog to eat a frog, and then lower down the page a list of the poisonous ones to avoid.

What happens if my dog eats a frog? Dogs can die from eating frogs, if it’s a poisonous frog. With non-toxic frogs, there are still health risks such as parasites causing infections or sicknesses such as salmonella. This is all worst-case scenario though; most dogs will be ok if they eat a frog.

In the best-case scenario, if your dog eats a frog then they might only feel some minor irritations around its gums and mouth area.

As you can see, there is no cut and dry answer on this due to the different types of frogs that there are. Given that, my advice would be you always call a professional vet if your dog eats a frog and you’re worried.

Is it bad if my dog ate a frog?

The major danger of eating frogs is the possibility of poisoning. Certain types of frogs are very poisonous to dogs and can cause death. It can be difficult to tell what type of frog that was consumed, so you should always err on the side of caution. If you hesitate, the poison could quickly spread.

Another side effect is related to the parasites that frogs carry. When your dog eats a frog which has parasites in, they could develop a lungworm infection.

Dogs can get lungworm from eating frogs

Lungworms are tiny parasitic worms that can infect dogs if they eat a frog that was already infected. This can result in a range of serious health issues including heart problems, breathing problems, and haemorrhaging.

Haemorrhages can occur in the dog’s eyes, intestine, lungs, liver, and spine.

Don’t panic though, it’s not that common. In fact, according to the Country File website:

“Incidents of lungworm being diagnosed in dogs were originally more prevalent in the South East and in South Wales, but there have been an increasing number of cases in other parts of the country, including Scotland. However, it is still a rare diagnosis.”

It’s still something to be aware of though, as it could happen when your dog eats a frog.

In simple terms, if your dog gets infected with a lungworm the effects can be catastrophic, and eating frogs can lead to parasitical infection.

Some types of dog are more prone to contracting lungworm. This include younger dogs and puppies (most likely due to being inquisitive), and the spaniel breed. The reasons for spaniels being more at risk of harm is not completely understood but could be a breed defect genetic.

Here are some possible signs to look out for:

The symptoms are easily misunderstood too, as they can be easily confused with other illnesses. Because of this it’s important you always seek your vet’s advice if your dog eats a frog or toad.

If your dog or puppy does eat a frog and it unlucky enough to contract lungworm, there are treatments available and most dogs will recover, providing it has been diagnosed early enough. Treatment doesn’t involve surgery, but instead medicines that will kill off the lungworm parasites.

You can see why an inquisitive puppy or dog might eat a frog, so prevention is far better than cure. Lungworm is also passed through dog faeces, so clean up after your dog, and also keep up to date with their spot-on worm and flea treatments.

Dogs can get salmonella from eating frogs

In addition to this, frogs and toads could potentially be carrying Salmonella. This can cause severe stomach problems in a dog who has eaten one. This is also the case if you have a pet frog or toad.

The dog should be kept far away from its enclosure to avoid contracting infections such as Salmonella.

For common non-poisonous frogs, a dog will likely only experience minor irritation in the mouth for a short period. The dog may try to paw at its mouth or drink excessive amounts of water to rid themselves of the taste if they didn’t like it.

Signs your dog ate a frog and are sick

One of the more obvious signs your dog ate a frog and it’s disagreed with them would be to see your dog foaming at the mouth. This happens because the dog’s body is trying to rid itself of the toxins caused by the frog.

This is similar to vomiting and drooling, which are also signs that your dog has eaten a frog. Some of the other signs include:

If you know for sure that your dog did not eat the toad, only bit it, or held it in its mouth, you might be in the clear. If it was a common frog, there should not be any danger to your pet.

However, if it was a poisonous frog, you will still need to seek medical attention from the vet.

What to do if my dog ate a frog?

If you think your dog has eaten a poisonous frog, you should act quickly. Get someone to call a vet as an emergency. As this happens, the first thing to do is wipe out your dog’s mouth to the best of your ability.

To do this, dampen a cloth and wipe their teeth and gums for about 10 minutes.

This will help remove any residual toxins that were left from the frog. You can also gently flush your dog’s mouth out with water but be very careful not to choke them or push the toxins down further.

After completing this, seek immediate attention from a professional vet for an emergency appointment. If there is any part of the frog left, take a sample of it to the vet with you. The vet will have an easier time healing your pet if they know that type was eaten.

In the situation where you know for certain that your dog has merely ingested a common frog, you should still call your vet for advice. They will likely tell you to monitor your pet and will set up a precautionary appointment so they can take a look.

Why do dogs eat frogs?

To prevent your dog from eating a frog, the best thing to do is understand why it happens. When a dog sees a frog or a toad, its natural predatory instinct kicks into gear. When the frog jumps, the dog becomes determined to catch it.

Most dogs enjoy the taste of common frogs. If they had a frog in their youth, they may remember the taste and constantly be on the lookout for more. They probably consider the frog to be a treat, something other than kibble.

Another reason could be that the dog is just trying to play with the frog. They may think that it is a toy or a game, and so they will try to catch it in their mouths.

They might not have any intention of eating the frog, but they could bite down in surprise if it starts to move while in their mouth.

How to stop your dog eating frogs

Living in an area that is heavily populated by frogs can be tricky. It may seem that your dog manages to find frogs wherever you go.

One thing you can do is become familiar with the frogs’ patterns and find out when they are most active. Avoid taking your dog on walks or letting them play in the yard during these times to reduce the temptation.

Something else you can try is teaching them to behave while they are on walks and do not let them chase rodents or small animals. They should learn to walk closely beside you, not pull on the leash, and avoid going after tempting moving creatures.

This will help reduce the chances that they will come in contact with a frog.

Some people prefer to keep a water bowl outside for their dogs, or others that get thirsty on their walk. This is a nice thought, but if left unattended, frogs may use this bowl to bathe in.

If this happens and a dog drinks from the bowel, this may also trigger the health effects. Bring the bowl in every evening and give it a good wash to prevent frogs from leaving dangerous toxins in the water.

Frogs that are poisonous to dogs when eaten

A sign that a frog is poisonous will often be the colors on its backs. Toxic frogs tend to be very brightly colored. The majority of poisonous frogs live in tropical rainforests.

However, toads are much more common and should also be avoided. The following is a list of poisonous frogs and toads to avoid:

Poisonous frogs are easy to spot, while toads are not. They all tend to have a similar brown and green pattern on their backs.

Toads have shorter legs than frogs and dry skin. If you see one, it is best to take your dog in the opposite direction, just to be on the safe side.

If you want to learn more about poisonous frogs, I recommend the Tree Hugger website. They have some fantastic images and information on what frog types dogs should avoid.

Dogs are naturally curious and love to investigate anything that moves, including frog and toads. There’s something about the way a frog moves and jumps that is irresistible to dogs.

The bottom line is, it’s probably that not much will happen if your dog eats a standard non-poisonous frog. He might feel a bit sick, but in most cases you would think it should be fine.

But don’t let your guard down, as anything a dog eats that it shouldn’t has the potential to be dangerous so please always call a vet.