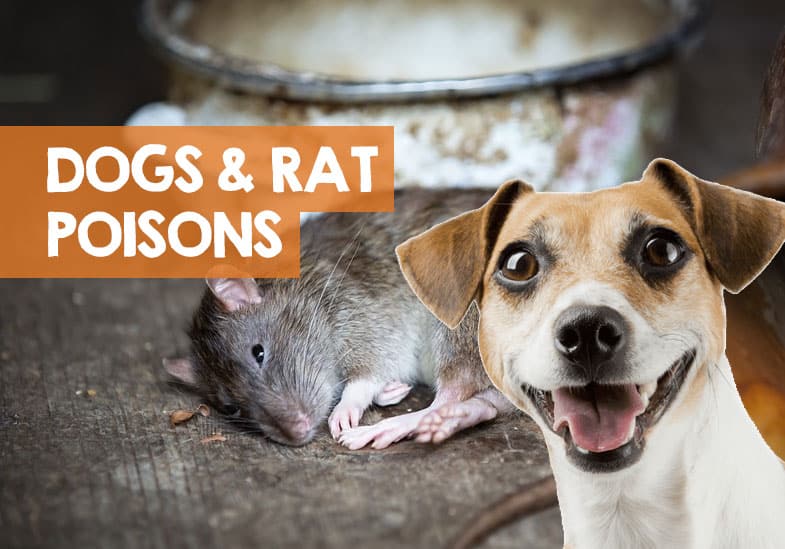 We’ve recently had a rat problem in our garden. They’ve been digging tunnels along our fence and getting closer to the house, even making a nest under our decking. I’ve had to call in the pest guy to put poison down, but was worried about what this could mean for our dog Claude. For example, can a dog get sick from eating a mouse or rat that has been poisoned?

Given how much my dog likes to chase small animals and scavenge anything he finds on the ground, the idea that rat poison can kill dogs is a big deal to me. I decided I needed to find out more, and I decided to share all that I learned about dogs and mice or rat poison.

Rat poison will kill your dog if enough is eaten. It is a very toxic and dangerous product that can be fatal when ingested by any size animal. In simple terms; rat poison and dogs don’t mix so the two things need be kept well apart from each other. This applies to both small and large dogs.

The problem arises is how rat poison is used. When it’s out in the open to attract mice and rats, then the same thing that makes it attractive to rodents is also attractive to dogs. For example, rat poisons have flavors and smells designed to attract mice or rats, but this can also be sniffed out easily by inquisitive dogs and licked or eaten.

If your dog eats rat poison, or your dog eats a poisoned mouse or rat (secondary poisoning) then there’s a good chance they will be sick and possibly even die.

How rat or mouse poison can kill a dog

There are four main types of commercial rat poison on the market, both of which are not safe for dogs to lick or eat.

How much rat poison is lethal to dogs?

The amount of rat poison that is lethal to your dog as far too many variables so it’s not possible to give an exact answer. If you suspect your dog has eaten or licked rat and mouse poison, contact your vet immediately no matter how much of it was there.

The reason why it’s so hard to say how much rat poison will kill a dog is due to factors such as:

Handy Hint: I’ve published a list of the best dog breeds for killing rats and mice.

Can eating a poisoned rat kill a dog?

One of the most common questions asked of pest control companies is whether eating a poisoned mouse can kill a dog. The answer is yes, a dog can get sick and die from eating a poisoned rat or mouse. It’s known as secondary poisoning as it gets into your dog’s system via a rodent already poisoned.

According to a pest control expert I spoke to, in most cases a dog will be sick after eating a poisoned mouse. But he said we should always err on the side of caution, as you don’t know how a particular dog will react.

For example, a large dog might eat a poisoned mouse and be sick, whereas a small dog might eat a large poisoned rat and die. It’s not worth taking any chances, so you should contact a vet immediately.

If your dog ate rat poison and you can’t afford a vet, there are some charities in both the UK and US who might be able to help with your vet bill. Please don’t let this stop you seeking urgent veterinary help though, your dog’s like could be a risk if you don’t.

Handy Hint: Did you know that dogs can also get sick from just eating mouse poop? Here’s all you need to know about how nasty rodent feces can be for dogs.

Symptoms of secondary rat poisoning in a dog

If you suspect your dog has eaten a poisoned rat or mouse, then call a vet immediately, particularly if you see any of the following symptoms of secondary rat poisoning:

The same advice still stands; if your dog has licked rat poison you should consult immediately with a vet. Some poisons can get into the body just by exhaling in, so licking could also get some toxic elements into your dog’s body.

Handy Hint: Rats carry all sorts of diseases, but did you know that they don’t transmit rabies so your dog licking a rat won’t pass this particular disease.

Are dogs attracted to rat poison?

Dogs can be attracted to rat poison for the exact same reasons that mice and rats are attracted; the flavor, color, and smell. Dogs are naturally inquisitive and have a sense of smell said to be 100,000 times stronger than a human nose.

If you put something that’s different into their environment, they will sniff it out and possibly try to eat it. For example, in the photo below you can see my dog sniffing mouse poison that is in a packet – he’s that curious about it.

Of course, I only put this in front of him to demonstrate the point, and did not leave it on the ground after this photo was taken.

Tips on how to keep your dog safe

Dogs and mouse poison should never be near each other. You should also clean up any dead rats or mice that you see which have been poisoned, before your dog can get to them and potentially eat the rodent.

To keep your dog safe from eating a poisoned rat or mouse, here are some guidelines:

There is no such thing as a dog friendly rat poison. If the poison can kill a mouse, it can kill a dog. However, there are alternative to rat poisons that won’t kill your dog and dog proof bat stations, such as the following which I found on Amazon.

Don’t take any chances with rat and mouse poison. The stuff if so toxic and can easily kill a dog. Even eating a poisoned rodent can make your dog sick with secondary poisoning, possibly be fatal too.