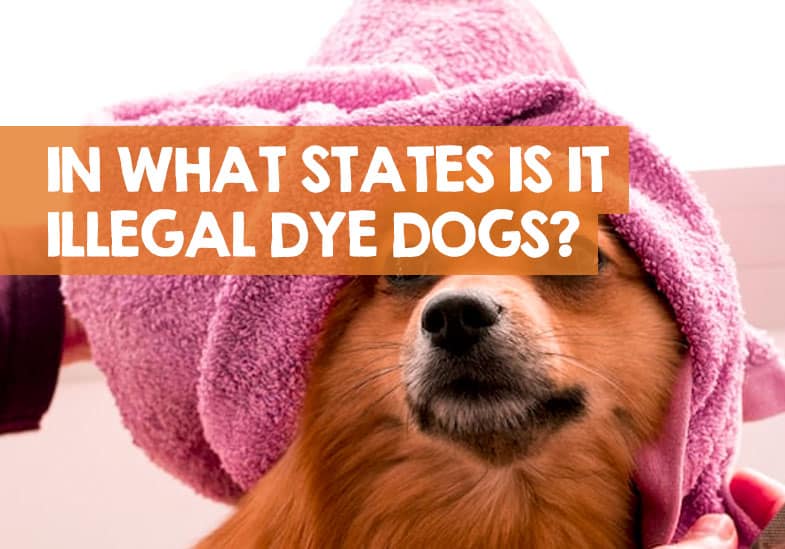 You might have seen that trend that occasionally seems to pop-up on social media where dog owners spice up their dogs’ looks with a head-turning dyed fur color. Personally I am not a fan of dying your dog’s fur, but I know some owners do want to do this.

Based on that, I wanted to explain what states it is illegal to dye your dog, and also some tips if you really feel you want to do it – but please don’t, I think it’s cruel.

So, in what states is it illegal to dye your dog?

Most states have no law on dog owners dyeing their dog’s fur and hair. Only a few states make it illegal to dye your dog. These include Florida, South Carolina, Maine, and Colorado. According to these states, dyeing a dog is a punishable offense as it’s an act of animal cruelty.

Keep reading as I tell you all about the anti-dyeing laws put in place by these states, including what punishment awaits you if you’re found guilty of dyeing your dog.

Dye them not: Why it’s illegal to dye your dog in these states

I’ve seen it all.

Some rocking bright rainbow colors on their fur. Others hot pink or purple. Then there are those uniquely groomed and dyed to look like certain wild animals or popular TV characters (hey there, Pikachu!)

We all view our dogs as special creatures who deserve to be pampered in whichever ways we see fit. After all, we own them.

From dressing them in ridiculous costumes to switching up their basic appearance with an eye-catchy dye, any adventurous dog parent would want their dog to stand out from the crowd.

Not all dog parents dye their dogs to make a striking fashion statement, though.

Some do it purely for safety purposes. Thieves don’t target dyed dogs that much, as the colorful fur gives dogs a bold identifiable feature that deters the bad guys.

If you’re thinking of dyeing your dog — be it for beauty or safety reasons — the laws in your state will determine whether you can carry on with your decision or hold that thought forever.

Yes, dyeing a dog is unacceptable in some states. States that it’s illegal to dye a dog are:

According to the laws in these states, dyeing your dog falls under animal cruelty because it doesn’t benefit a dog’s overall well-being in any way. Rather, it comes with several physical and psychological risks. For instance:

What the law in South Carolina says

According to the law in South Carolina, it’s illegal to dye any animal, including a dog.

It’s also unlawful to bring a dog dyed from elsewhere into the state. In other words, if you’ve colored your dog in a state with no anti-dyeing laws, you should remove the dye if you intend to move or visit South Carolina.

If a South Carolina law enforcement officer finds you with a dyed dog, they will arrest you for committing a misdemeanor crime. This offense is punished by up to 30 days of jail time or a fine amounting to $200.

Is it illegal to dye a dog in Florida?

Florida prohibits dyeing any kind of animal — including dogs. And similar to South Carolina, you shouldn’t bring a dyed dog into Florida.

Owning a dyed dog is treated as a second-degree misdemeanor. If convicted, you will be punished by either paying a $500 fine or being imprisoned for not more than 60 days.

What the law in Maine says

The state law in Maine considers it illegal for anyone to display, sell or give away a dyed dog. The “display” aspect simply means you can’t show up with a dyed dog in public.

However, this law doesn’t apply to owners who’ve been legally authorized to use their dogs for hunting or exhibition competitions. And even in this case, you must have the relevant documentation proving your dog’s dyed look has been legally acknowledged.

If you dye your dog for any other reasons other than for the legally acknowledged hunting or exhibition purposes, you’ll be charged with committing a civil violation.

Dyeing your dog in Maine won’t attract jail time but a fine of up to $100.

What the law in Colorado says

Colorado has a tough animal cruelty law that considers it unlawful for dog parents to have dyed dogs. It’s a misdemeanor offense that can attract a jail sentence or a staggering $1,000 fine.

And so you know how serious Colorado’s anti-dyeing dog laws are, a salon owner in Colorado was once slapped with a $1000 fine for dyeing her poodle pink.

The whole dyeing idea was aimed at raising awareness of breast cancer among her customers. Plus, she used organic beetroot juice to color her poodle.

So even if you’re dyeing your dog for a good cause and using non-toxic products while at it, In Colorado, your good intentions can still win you a trip to the courthouse.

If you’re going to dye your dog, do it the safe way

Besides the states mentioned above, you’ll likely not run into legal issues if you choose to dye your dog’s hair in other states.

But if you’re going to hop onto the dyeing dog trend, you better proceed with caution.

For starters, you should never color your dog using dyes formulated for humans. Human dye has toxic chemical ingredients, which, if they penetrate your dog’s body through the pores, can kill your dog or put them through a near-death experience.

Your dog can also lick off the dye’s harsh chemicals and develop internal burns, among other life-threatening symptoms.

If the human dye side effects kick in, it will take lots of pain medications, safe scab removal efforts, IV fluids, and special care for your dog to make a miracle recovery.

You should only use dog-safe dyes, food colors, or natural plant-based dyes to color your dog. But it’s worth mentioning even the commercial “dog-safe” dyes on the market aren’t 100% safe.

You must also do a patch test before covering your dog’s entire body with the non-toxic dye.

While the decision to color your lovely dog is entirely up to you, it’s best to think through the potential psychological and physical health risks involved.

Is dyeing dogs illegal in Florida?

Yes, that’s right. Dyeing your dog in Florida is illegal as it endangers the dog’s welfare.

Are you allowed to dye your dog?

This depends on the state you live in. Most states have no laws prohibiting dog owners from dyeing their dogs. But it’s illegal in states like Florida, Maine, Colorado, and South Carolina.

Can you dye your dog’s hair in Colorado?

No, you can’t. As mentioned earlier, Colorado has a law stating that it’s illegal for dog parents to dye their dogs fur.

Can I tie-dye my dog?

As noted earlier, you can dye your dog only if it’s legal in your state. You should also use dog-safe dyes and avoid human dyes completely.

But I don’t recommend it for the reasons I’ve outlined, legal or not.