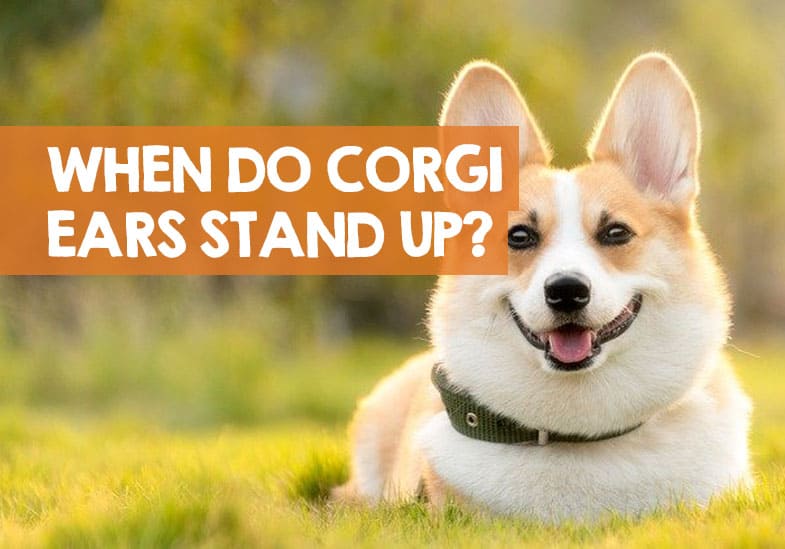 Corgis are born with floppy ears which won’t perk and stand up until they are older. Their floppy ears will even have what appears to be a life of their own during the first few months; sometimes one will be erect, sometimes both, sometimes none! It’s a crazy ride!

The key here is to not worry if your Corgi doesn’t have pointy ears from the time you bring them home. Floppy ears down are normal in younger pups, but when exactly you can you expect your Corgi’s ears to stand up and how long will the ears be down?

When do Corgis’ ears stand up? Most of the time, the ears of a Corgi puppy will perk up and stand up straight after 5 to 15 weeks, and not always in sync. Most Corgi ears will stop being floppy once they have finished teething at the latest. However, some can even be as late as 8 months old when the ears go up.

Why are my Corgi ears down and still floppy?

The above is very generic advice. There are still Corgis whose ears will stay down forever and never perk up. Whist pedigree Corgi standard specify “prick ears” it’s not always the case that this will happen – it doesn’t make your dog any less of a Corgi!

My Corgi’s ears never went up!

As mentioned, there will always be some Corgi’s with floppy ears that stay down and never come up. This should not be viewed as a problem, and gives your Corgi a lot more character than the standard Corgi.

However, if you do want to know more about your Corgi’s down ears and how old the ears should eventually go up, read on.

When do Corgi ears go up?

Corgi puppies are born with floppy ears, but most will have standing up ears by 15 weeks. However, there will be some whose ears won’t stand up until they have finished teething.

This means that your Corgi’s ears can be floppy one week, stood up the next, and even not at the same time! Until the calcium is evenly shared around the body, you can expect some possibly weird ear behavior.

And this lack of calcium in the ears is why you might hear some Corgi owners saying they will give their puppy yoghurt – due to the high calcium content.

What age do a Corgi’s ears stand up?

It’s not unheard though for the ears to remain floppy forever in a few Corgis.

How to make a Corgi’s ears stand up?

The main method of how to make a Corgi’s ear stand up was by taping. Some breeders will do this if the ears are still floppy by 8 weeks of age. It sounds cruel, but from what I’ve seen, it looks harmless.

Breeders who have taped their Corgi’s ears successfully say that the tape is only in place for 5 days, which is normally enough time for them to stand up by themselves.

If the Corgi ears are still floppy, remove the tape and try the process again for a further 5 days.

I’ve already touched on the next method which all relates to getting higher levels of calcium unto your Corgi’s diet. This can include additional foods such as:

The high calcium content in these foods is said to help a Corgi’s ears to stand up given that their natural calcium is being used in the development of their teeth.

No matter what your Corgi’s ears are like, just let nature take its course. Droopy ears look very cute, so why not just let it be?

But, in most cases your Corgi’s ears will stand up once they have finished the teething phases, with the pointy and pricky look this breed is famous for.

I’ve been writing about Corgi puppies on Doggysaurus.com for as long as I can remember. If you’re new to owning this breed, here are some additional guides to help with your puppy:

Wolves are one of the most powerful carnivores in the animal kingdom. Ever wondered whether there are dog breeds strong enough to finish off a wolf? You’re about to find out. There are several...

Continue Reading
link to How Can I Regrow Hair on My Dog’s Tail? 6 Home Remedies

Seeing your dog’s tail go from fully thick to less voluminous with patches can be a worry and it looks anything but healthy. But the good news is, it’s possible for a dog’s tail hair to grow...