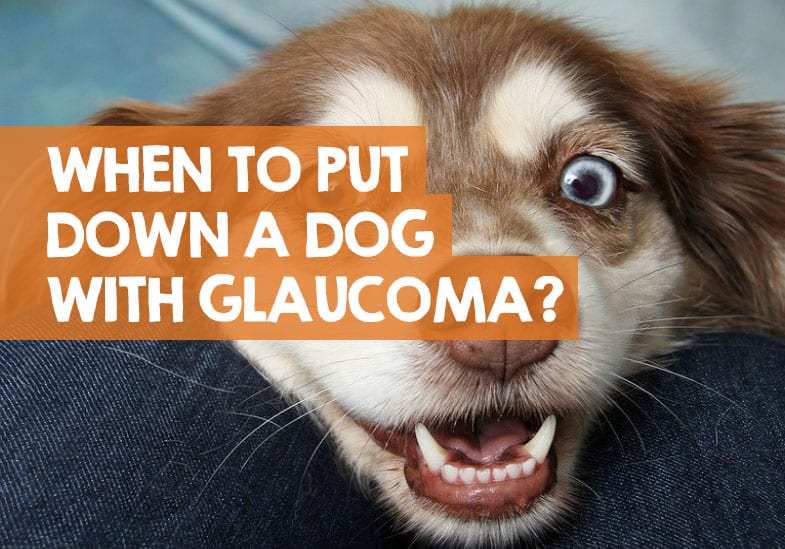 Important Note: This article has been checked and verified by a professional veterinarian for accuracy. However, you should always seek advice from your own vet before making any decisions on euthanasia as there are never black and white answers for this decision.

This article was written by a dog owner, then checked by a vet for accuracy.

I recently caught up with a college friend of mine who had some really sad news about their 14-year-old Golden Retriever. Sammy had a range of health issues including arthritis, but also very severe glaucoma which was serious enough that the vet was suggesting the eye would have to be removed.

As you can imagine, the conversation eventually came around to whether it was the right time to put his dog down with glaucoma. Not a nice discussion, but euthanasia was an option given how bad the dog’s quality of life was becoming.

Thankfully for most dog owners, glaucoma can be treated in dogs if caught early, and they can live a long and happy life. However, when it gets to the painful stage and leads to blindness and loss of eyesight, you might need to consider euthanasia.

This is particularly true if like my friend’s dog Sammy, it’s a further health complication that is affecting the dog’s quality of life.

Here’s my short answer, following by more in-depth consideration of whether to euthanize:

When to put down a dog with glaucoma? Whether to euthanize your dog will depend on the stage of the glaucoma and whether it is caused by an underlying disease. If your dog has other health conditions that are affecting their quality of life in conjunction with glaucoma, putting them down might be the most humane decision. However, not all cases are the same, so you must seek advice from your vet.

You should also consider that once enucleation (removing the eye(s)) has been recommended it is important to consider if your dog would be healthy enough to undergo and fully recover from a surgery this significant.

When is the right to euthanize a dog with glaucoma?

Making the decision of putting your dog down in order to relieve the suffering is the hard part of the glaucoma disease. Some dogs may try their best to handle this disease while their owner who has to sadly watch as their health deteriorates helplessly.

During the later stages of glaucoma, your dog will become increasingly reliant on you due to their poor eyesight, or even complete blindness. In my friend’s case, the dog was spending almost all of its time stuck to him and his kid like glue… and of course, that makes it a lot harder to let go and will often mean owners put euthanasia off.

But the bottom line is that as owners, you will know your dog best and will have to make the decision on whether to put them down, with some advice I would hope from your vet.

What to think about when considering euthanasia?

Many times, it will depend on what the underlying cause of glaucoma could be and whether they have other age-related conditions. Here are some factors to consider if your dog has serious glaucoma. These will all influence whether you make a quicker decision on putting your dog down.

A question I posed to my friend, was whether their dog was still able to enjoy the things he used to love. Things like chasing a ball, jumping on the couch, and so on. My view was if there appeared to be no joy left in the dog’s like, it could be the right time to put them down.

Making the decision is not easy, so I do advise you learn as much about glaucoma as you can before making a decision on euthanasia. Here is a short overview on the disease.

What is glaucoma in dogs?

Glaucoma is a disease where there is an increased pressure in the eye which is a result of inadequate drainage of fluid within the eye. The disease is typically progressive; and if the condition becomes severe, it can damage the optic nerve of dogs, hence causing permanent blindness and severe pain.

There’s a more in-depth explainer on the VCA Hospital website.

According to VCA Hospitals, the causes are:

Can dogs live with Glaucoma?

Many dogs that have a glaucoma diagnosis are able to live a normal life with medication. If the condition is treated quickly, it will help in minimizing the effect of the disease and slowing the progression. Otherwise there is a high risk of permanent blindness.

Signs and symptoms of glaucoma

Glaucoma can completely change the life of your pet so it’s important to pay attention to the symptoms as soon as they develop. Symptoms can include (view source):

In most scenarios, the disease affects one eye first but eventually spreads to the other. You might not even notice your dog has glaucoma at first, perhaps only noticing when your dog starts to bump into things.

Glaucoma needn’t be a life sentence for your dog, but in older dogs, or more extreme cases it can be cause for euthanasia considerations.

Due to the other complications my friend’s dog, he did choose to put his dog down in the end, but not just because of the glaucoma. It was a combination of conditions including the blindness and arthritis that swayed him the end – his dog was just extremely unhappy.

I would implore you to consult with your vet and consider all options before choosing to put your own dog down. Glaucoma doesn’t have to mean euthanasia.

Handy Hint: There’s a common misconception that dogs die with their eyes open, but this isn’t actually always true. See what I found out about it, and what you need to know.