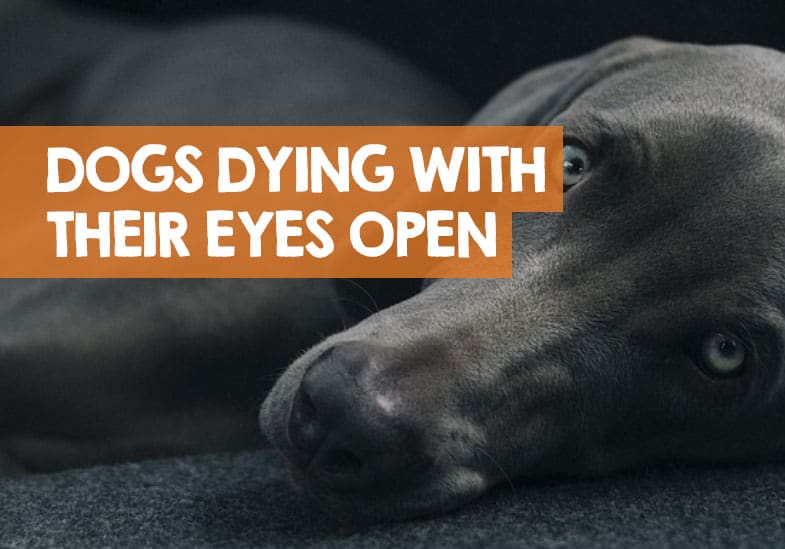 I stumbled across a discussion on Facebook recently where bereaved dog owners were comparing notes about the final moments of their pets’ lives. One thing that kept cropping up was how many people said their dog died with its eyes open.

There was lots of conjecture from people who believed this happened because the dog knew it was dying, through to people who said it was simply a case of how the body works. I wanted to find out for certain though, so spoke with a vet I know, plus did some online research.

What I found was quite surprising and went against the popular opinion of the dog owners on the social media discussion; not all dogs die with their eyes open. In fact, it’s a misnomer that they do.

Do dogs die with their eyes open or closed?

This quote from a vet sums up the answer to question quite neatly:

“Having been a vet for over 25 years, I have seen many dogs die, some of whom I’ve had to put to sleep. There is no pattern to these dog deaths, aside from the situation in which they pass away. For example, I have seen eyes open, eyes closed, and eyes half shut. How their eyelids appear depends on the manner and timing of death. If they dog is conscious at time of death, the eyes will remain open. If asleep, the eyes will remain closed when they die.”

Why do some dogs die with their eyes open?

Dogs that die with their eyes open will be those that were surprised at time of their death, or dogs that were awake and lucid when they passed.

The reasons that dog eyes don’t automatically shut when they die is the same reason why human eyelids don’t shut when we die – muscle.

To close your eyes, you need to actively use muscle control. Closing of the eyelids is something that dogs need to want to do, and let’s be honest, making sure their eyes are closed when they are at the point of death probably isn’t high on their agenda – I know it wouldn’t be for me!

To conclude, if you are wondering why your dog died with her eyes open, the simplest answer is because her eyes were open.

Unfortunately it could have meant your dog had some awareness of what was happening, or was in shock, but hopefully it would have been a quick death.

Did You Know: Dogs aren’t born with their eyes open and it’s all due to an evolutionary trait. Here’s when you can expect a puppy’s eyes to open and how good their eyesight will be.

How cultures and religions interpret open eyes at death

I read an interesting piece of research that was conducted to observe full or partial eyelid closure after death in humans. The study found that 63% of human patients in a hospital setting died with their eyes closed, with the physiology behind it appearing to be the same as with dogs.

What was quite intriguing though was how different theories and beliefs have cropped up over time about death and the eyes being open. Here is one of the more interesting statements from the intro to the study.

“Chinese and Taoist belief suggests that the dead have to be judged in hell and punished according to the sins that they have committed in life. In such societies the startled post-mortem appearance of fixed open eyes suggests a fearful, and not a peaceful judgement.”

I then found a blog that explained how dying with your eyes open could be interpreted in Hinduism.

“Hindus have a Brahmin priest that helps the dying person to stay focused on God by saying the name of Ram (a Hindu God) or a healing mantra (a prayer or a chant). A person who has dies has a peaceful expression and their eyes and mouth (where the spirit exits) are slightly open.”

All of this raises an additional question for me; do dogs know when they are dying?

From my research, I found that scientists have no real way of knowing the answer to this. It’s unlikely that we will ever definitively be able to say yes or no to the question.

What is important though, is that owners and vets are able to make informed decision for the well-being of the good with regards to euthanasia. You should try and make your dog’s last days as happy and comfortable as possible. And just so you know, dogs don’t feel in pain when they get put to sleep.

I’ve written in the past about having to make the difficult choice on when to put down your dog. Here is one of those pieces where I have tried to be as sympathetic, but realistic as possible.