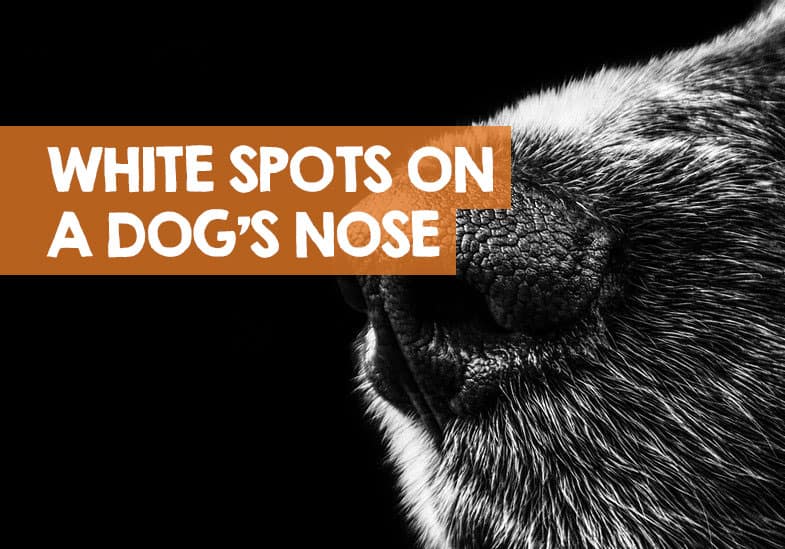 A healthy dog’s nose is usually an all-around consistent color. Depending on the breed, it can be black, brown, or even pink.

This is why any discoloration is immediately obvious and sometimes alarming.

Read on for more information on dog noses and what white spots and bumps that appear on them can mean.

There are many reasons why your dog might get a white spot on their nose. Spots and bumps of different shapes, textures, and colors are actually very common and many of them need minimal intervention.

Please note, I am not a vet and all the information in this guide is through my own online research. If you notice a small white spot on your dog’s nose, particularly if it’s getting bigger, please call your vet.

A light white spot on your dog’s nose may mean the beginning of snow nose – a condition where it lightens from black or dark brown to pink. This is a classic case of a white spot on a dog’s black nose.

The name comes from early assumptions that the color change is because of cold weather, but it’s now known that it happens to dogs in all climates.

Snow nose is most commonly seen in Labrador retrievers, golden retrievers, Siberian huskies, and Bernese mountain dogs, but it can affect any breed.

There are no real diagnostic treatments for snow nose because it’s a cosmetic change with no known cause. It may be temporary or permanent.

Overall, there’s no cause for worry.

If you crate your dog for extended periods, they may develop a raw spot on their nose that appears as a white bump or mark. This is because they spend a certain amount of their time rubbing their noses in and around their kennel or crate.

They may be trying to bury their food or dig their way out. It may also be a sign of anxiety… it’s often found with dogs who have been in kennels for a week whilst owners are on vacation.

You can gently wash the raw skin on their nose. It may be a good idea to make adjustments to your crate setup to make it a happy and safer space for your dog.

Just like humans, dogs can get pimples, whiteheads and blackheads. Their fur follicles are similar to human hair follicles in that when they get clogged, a pimple may form.

Blocked fur follicles are commonly found on the muzzle, stomach, and genital area of your dog. This will often show as a small or tiny white spot on your dog’s nose.

Dirt and debris can clog your dog’s pores and cause a breakout. When giving them baths, make sure to get into all the nooks and crannies of their nose, chest, and nether regions.

Frequent breakouts in the muzzle and chin area may be because of dirty food and water bowls. Plastic retains oil and dirt, so switch them out for stainless steel or ceramic.

One thing you shouldn’t do is to pop a pimple yourself – it may become inflamed or infected.

Hyperkeratosis is the buildup of keratin on the surface of your dog’s nose. This causes dryness, cracks, and a thick crusty growth on the nose – the most severe cases can protrude as much as an inch – and can look like a white bump on your dog’s nose.

This is a common condition across dog breeds, and usually occurs from middle to old age. It’s generally chronic, meaning you will have to watch out for it and treat it for the rest of your dog’s life.

An effective treatment for the cracked, dry skin is a natural moisturizer. Steroids and antibiotics can be used to treat inflammation due to the keratin buildup. If the excess keratin is significant, it can be carefully cut away.

DLE is a common autoimmune disease that targets the skin, usually around the dog’s nose, lips, eyes, and skin. DLE begins with lesions, color changes such as white nose marks, and swelling on the nose.

There is no known cause, though there are environmental and genetic factors involved.

DLE is localized, so topical creams and gels will reduce swelling and discomfort. As sun exposure makes symptoms worse (dogs can get sunburn), dogs diagnosed with DLE will need to stay indoors.

PF is another common autoimmune disease that affects middle-aged dogs of any breed. Symptoms include scabs and pustules around the face, ears, and head. Possible causes are ultraviolet (UV) light exposure, viral infections, or a genetic predisposition (it’s especially common in Chow Chows and Akitas).

PF is diagnosed through a skin biopsy. Mild cases are treated with corticosteroids and topical steroids.

Many dogs respond well to this treatment plan and can be weaned off all medication after some time.

Vitiligo is a relatively rare skin condition where the skin loses its natural pigment, resulting in white spots appearing on a dog’s nose, muzzle, lips, and through different parts of their coat.

Vitiligo usually begins in small white spots on the dog’s nose or face, then spreading to the footpads and fur. The full spread occurs within six months of the first appearance of a white spot.

There’s no known cause, but it’s believed to be hereditary. These breeds are at a higher genetic risk of vitiligo:

If there’s no underlying medical cause for the de-pigmentation, there’s no treatment necessary.

Just like snow nose, this condition is purely cosmetic and causes no discomfort for the dog. The white spots on the dog’s nose may wax and wane in appearance over time.

How do I treat a white spot on my dog’s nose?

Most skin problems like white marks and small spots don’t need immediate intervention, but it’s still best to take your dog to the vet once you notice a persistent white marks and discoloration on your dog’s nose.

It may be as simple as a pimple or snow nose, but an accurate diagnosis will lead to proper treatment, or reassurance if treatment isn’t needed. Further testing may include blood work, scraping the affected tissue, allergy testing, or a biopsy.

Common treatments for spots include moisturizing balms for dryness, antibiotics for infections, and anti-inflammatories for allergies.

Your vet may also advise environmental, behavioral, or dietary changes depending on the determined underlying condition.

Can I put Neosporin on my dog’s nose?

Neosporin’s ingredients are generally considered safe for dogs. A small amount applied to a minor scrape on your dog’s white nose bumps and marks will not be harmful, but that doesn’t necessarily mean you should use it every time they get wounded.

A dog will likely just lick the Neosporin off as soon as you apply it. Swallowing a small dab won’t cause any harm, but you wouldn’t want them to ingest any more than that.

Simple first aid steps like washing the wound with warm water and brushing away dirt and debris are more than enough for minor scrapes.

If your dog keeps licking their injured nose, it may extend the healing time or cause an infection. If the wound gets worse, it would be best to take them to the veterinarian.

Is the white spot on my dog’s nose cancer?

Nasal cancer in dogs is very rare, affecting less than 2% of all dogs. A simple raised bump on your dog’s nose most likely isn’t the first sign of cancer.

But if your dog is experiencing nasal discharge (mucus, blood, and/or pus), shortness of breath, eye discharge, and nasal bone erosion, take them to the veterinarian immediately.

To conclude, most white marks on a dog’s nose are nothing to be alarmed about and usually have a very simple explanation.

However, nothing can beat the peace of mind of talking it through with a vet so please do call them the moment you see white bumps and marks on your dog’s nose and face.