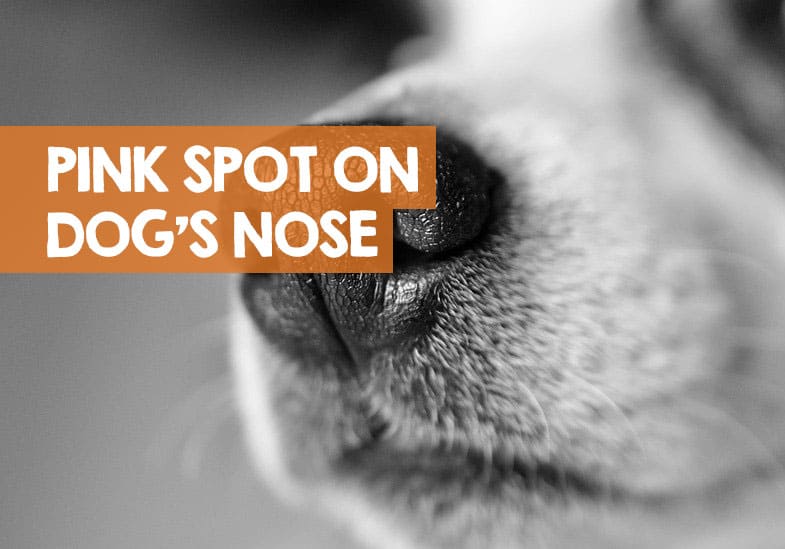 If you have ever noticed a pink spot on your dog’s nose, then please don’t panic. It could be there for a range of reasons. If it is growing and not going away, then you should consult with a v vet for a professional opinion, but here’s all I know about pink marks, bumps, and spots on dog noses.

Firstly though, if you call your vet, they are likely to explain a few possibilities of what a pink spot on my dog’s nose could mean. They will probably say it was either a condition called snow nose, a scratch, an allergy or vitiligo.

Reasons for a pink spot on a dog’s nose

Let’s look at those reasons in a bit more detail, starting off with snow nose which can look like a tiny pink spot, that can actually grow larger.

1. Pink spot due to snow nose

The first thing that the vet might mention is snow nose, which I had never heard of before. This happens when a dog’s nose changes to a lighter pink or brown colour. The change is usually temporary, and the colour darkens again when the temperature gets warmer.

This is considered to be harmless to the dog and is thought to be brought on by an enzyme called Tyrosinase that gets broken down in the cold. The condition typically occurs during the winter months when the temperature gets colder, but it can also happen in the summer, which researchers do not have much information about.

2. Pink spot due to a scratch

Another reason for the pink spot on your dog’s nose could simply be the result of a scratch. If a dog gets in a fight or scratches their nose themselves, this could result in a depigmentation. As the nose heals, it will turn from pink slowly back to its original colour.

Typically, you will not need to put anything on the nose, you just need to wait for it to heal on its own. If you do not notice it improving within a couple of weeks, call your vet for a consultation.

3. Pink spot due to an allergy

The third possibility of a pink bump or mark on a dog’s nose could be being allergic to something that his nose had come in contact with. This may be the culprit if you have recently bought your dog a new food or water bowl.

As the dog’s nose comes in contact with the bowls, it can have an allergic reaction and change colour to pink. Plastic bowls are partially comprised of a chemical called p-benzyl hydroquinone. The chemical can irritate the skin and also cause depigmentation.

This should just be temporary, so try switching the bowls back and seeing if the colour reverts.

4. Pink nose due to vitiligo

Vitiligo is an immune disease that affects dog in the same way that it affects humans. Vitiligo results in dogs to lose pigment in their skin, including in their nose, creating pink spots and areas.

The pigment is blocked from reaching its desired location within the body. The condition not only affects a dog’s skin but can also result in their fur coat turning white.

Try to remember when you first started noticing changes in your pet, as the vet will need to know.

It typically starts to occur early in a pet’s life, within the first few years. There is currently no treatment for vitiligo, but luckily it will not affect your dog’s daily life or any of their activities.

They will not be in pain, as the only thing that will have changed will be their appearance.

What a pink bump on your dog’s nose could mean

If you notice a pink bump on your dog’s nose, the situation will be different. In this case, the likely cause of the bumps is known as nasal polyps.

These could be a sign of nasal tumours, which will either be benign or malignant. The majority of these are non-cancerous, but you must take your dog to the vet right away if you notice any of these bumps.

In addition to the bumps, you may also notice that your dog has had:

These are all symptoms of nasal polyps, which was likely the result of a virus that your dog had. To treat nasal polyps, the vet will either remove them with surgery if possible or recommend radiation therapy.

The dog will need to wear a cone for some time afterwards, and they will need to be monitored in case the polyps return.

Collie nose is a skin condition attributed to lupus, which is an auto-immune disorder in both humans and dogs. It is primarily identified by a loss of pigment on a dog’s nose and bleeding ulcers.

You can notice collie nose in dogs when you see that the colour is starting to fade from black to pink. In addition to this, the skin is very red and flaky, and there are open sores on the dog. Collie nose tends to flare up when dogs spend too much time in direct sunlight without any protection. Dogs that live in areas with high altitudes, such as mountains, will be more exposed to the ultraviolet rays – here’s what you need to know about sunburn in dogs.

Collie nose can be treated with immunosuppressive drugs obtained by your vet. This treatment, combined with not spending too much time in the sun, should result in your dog feeling as good as new soon enough.

If you have a dog with a pink nose, you will need to remember that it requires a little more care than that of a black nose. Pink noses are more sensitive to the sunlight, and they can burn easily.

Whenever your dog is outside in the sun, you should apply sunscreen to their nose to protect them from developing skin cancer. Your vet should be able to recommend a pet-safe sunscreen product that you can use to keep them healthy.

A brand-new puppy that you have just brought home is likely to still have a completely pink nose. The majority of puppies are born with pink noses, some of which will turn dark while others will not.

On average, if your puppy’s nose is going to change colour, it will do so within the first 8 to 12 weeks. Y

It is interesting to consider that a dog’s nose is the colour that it is simply due to what breed it is. The dog breeds that are more likely to have pink noses throughout their whole lives include but are not limited to the following:

On the other hand, the dog breeds that are more likely to have black noses throughout their whole lives include but are not limited to the following:

Handy Hint: Here’s a list of the most popular dog breeds who have black mouths and gums.

If you are at all worried about the pink spot on your dog’s nose, you should always consult with your vet first. This is particularly relevant if the pink bumps and marks start to grow, and don’t go away.

Whilst it’s probably not a serious issue, it’s better to be safe than sorry.